Markets are so fascinating. When I visit a foreign country the first thing I do to find out how people live there is to visit a local market or a street market. The Borough Market is probably my favourite market in London and this year it marks 1,000 years. 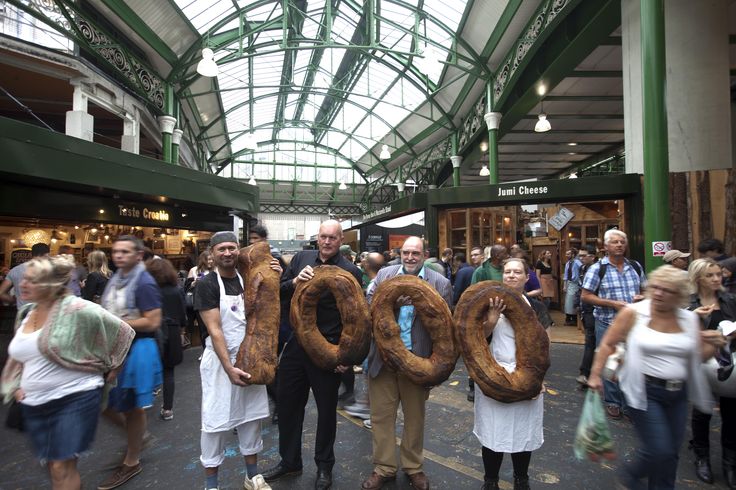 In an event entitled Footsteps in Time, Borough Market kicked off a year of festivities by encouraging members of the public to create a colourful trail of footprints across the Market. This will be followed by a series of events scheduled to take place throughout the next twelve months, hosted by the Market in collaboration with leading figures from the food and education sectors. 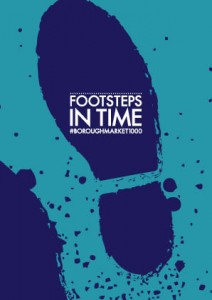 Borough Market took the first step in a year of festivities to celebrate 1,000 years of history on Saturday, 20th September by leaving a trail of footprints all over the market.
Shoppers, traders and the public dipped their feet in coloured paint and literally made their mark on Borough Market. Trails of brightly coloured footprints built up during the day to create a vast work of art, evoking the millions of feet, from William Shakespeare to Charlie Chaplin, which have trodden the same ground.
At the end of day the paint was all washed away, taking the streets of the market back to their original state.
The nine hours of the market’s day have now been captured in this video:

Borough Market will be stamping its footprint over the next year with a series of special events.  The year will provide customers, traders and the general public with the opportunity to celebrate Borough Market’s rich history while also exploring the role Borough Market can play in the centuries to come.

Apple Day festival in October – with 1,000 varieties of British Apples on display in a very unique way.

Food debates and education programmes – guest speakers will be invited to talk to the public about the future of food and the role markets can play in society.

Summer arts – next summer, Borough Market will stage a range of music and theatre performances. 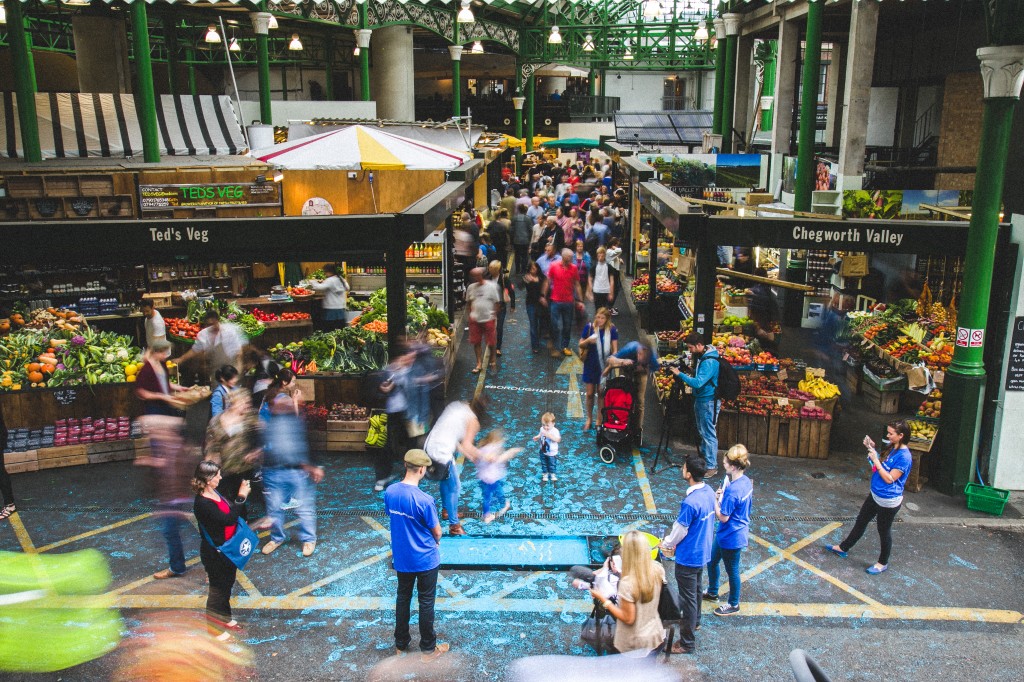 11th-12 Century
A market takes shape along what is now Borough High Street, with traders benefitting from the heavy traffic across London Bridge:  for centuries the only route into London from the south.  A second market, specialising in grain, forms nearby in the grounds of St Thomas’s Hospital.

13th Century
Charters issued by the City of London, whose own markets are being threatened by competition from Borough, forbid Londoners from crossing the bridge to buy “corn, cattle or other merchandise”, declare that “no market place shall be kept on London Bridge”, and make it illegal for anyone to cross into the City to re-sell bread brought on the cheap in Borough.” 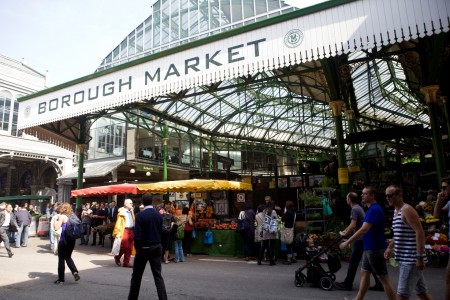 14th Century
City authorities petition the Crown in an attempt to gain control of Borough which, thanks to the vagaries of the legal system, has become a haven for escaped criminals.

15th Century
Henry IV grants to the City of London “assay and assize of bread, wine and other victuals”, sold at Borough Market:  revenues which had previously gone to the Crown.

18th Century
The Market is closed by Act of Parliament due to congestion on the high street impacting on trade in the City.  Residents of Southwark are granted the right to start a new market, independent of the City, away from the high street.  They raise £6,000 by offering annuities to local citizens and buy the area known as the Triangle. The new market opens in 1756.

19th Century
The Market expands considerably and the growth of the railways turns Borough into a vital hub in the fruit and veg wholesale trade, serving commercial customers from all over the South East.

This entry was posted on Wednesday, October 1st, 2014 at 7:00 pm and is filed under Attractions. You can follow any responses to this entry through the RSS 2.0 feed. Both comments and pings are currently closed.