It’s beginning to feel a lot like Christmas….. London is truly magical over Christmas. Thousands of trees across the Capital are decorated, lots of Santas are everywhere and shops filled with glitter and Christmas lights! After 15 years leaving in this amazing city I decided to take a BIG BUS tour ride in the evening to see the lights in Central London and absolutely enjoyed it. 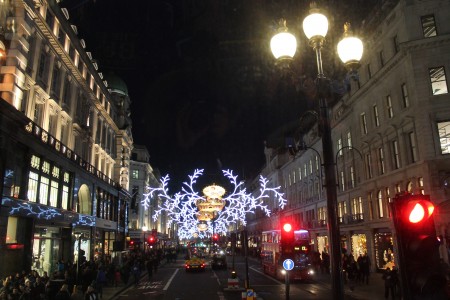 I would have never thought I would love something I regarded to be pure touristic and swore I would never do in any city. But from the top deck I enjoyed watching people crazily trying to walk down Regents Street to do their shopping while I could watch all the lights comfortably without fighting for vital space. 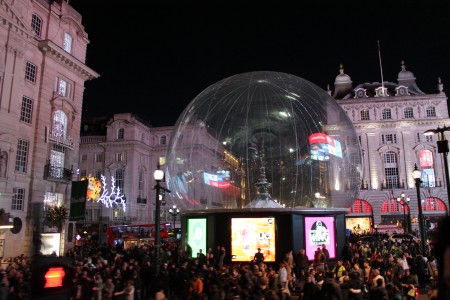 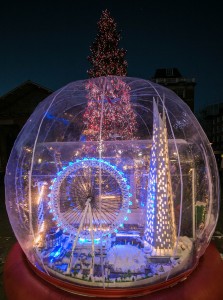 The theme across town seems to be snow globes.

In fact we saw a huge one at Piccadilly which quite extraordinarily wraps the Eros statue and one at Covent Garden inside which there’s an amazing Lego mini reproduction of London including a 2 metres high Shard. Designed and built by Duncan Titmarsh, the UK’s only Certified LEGO Professional, the impressive structure featuring 120,000 bricks, took him 75 days to build. The globe has a distinct London theme, hosting 14 of the UK capital’s most iconic buildings, the tallest being London’s newest landmark, The Shard, which stands proud alongside its neighbours at a towering two metres. Other buildings include Big Ben, Nelson’s Column, The London Eye, Shakespeare’s Globe Theatre, and of course, Covent Garden Piazza itself.
Amidst the spectacular cityscape are a number of hidden LEGO Santa Mini Figures, so that Christmas shoppers can take a break from trawling the shops and see how many they can spot and win some LEGO prizes. They can also press a magic button and watch in delight as the snow starts to fall on the LEGO scene – it will be a white Christmas at the LEGO Snow Globe!

Among other attractions that caught my eye in this Christmassy London 2013 are some remarkable Christmas Trees’ installations:

The first baked Christmas Tree installation is quite impressive on London’s Southbank. 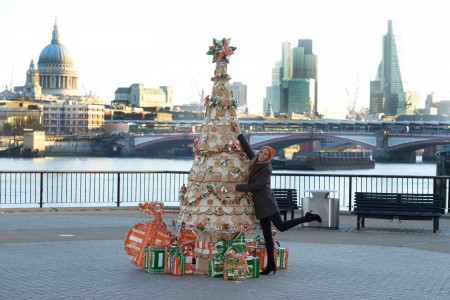 WARBURTONS made this installation to mark the launch of special Christmas themed packaging on its iconic wax wrapped loaves including the nation’s number 1 loaf, Toastie.

The tree was decorated with origami directions, made from the seasonal wrapping, took 50 hours to build and comprises 2,500 pieces of baked family favourites, including bread, Rolls, Wraps, Sandwich Thins, Pancakes and Crumpets. Standing at 12 foot tall, the baked tree was surrounded by a range of exciting gifts, wrapped in the limited edition packaging. 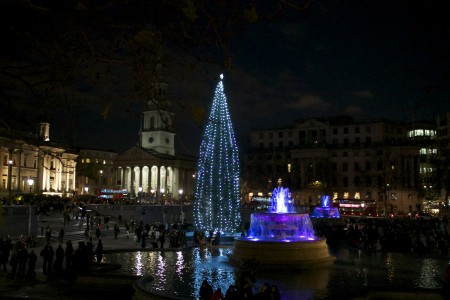 The Trafalgar Square Christmas tree is usually a Norwegian spruce over 20 metres high and 50-60 years old. It is selected from the forests surrounding Oslo with great care several months, even years, in advance. The Norwegian foresters who look after it describe it fondly as ‘the queen of the forest’.

The tree is felled in November during a ceremony in which the Lord Mayor of Westminster, the British ambassador to Norway and the Mayor of Oslo participate. It is brought to the UK by sea, then completes its journey by lorry. A specialist rigging team erects it in the square using a hydraulic crane. It is decorated in traditional Norwegian fashion, with vertical strings of lights – energy-efficient light bulbs are used. 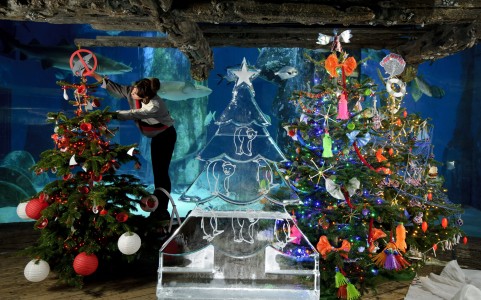 THE SEA LIFE LONDON AQUARIUM also has a special themed ‘FISHMAS’ TREES including an original and stunning six-foot tree created entirely from ice called climate change Ice Tree. It was a temporary one as it did not last more than 24 hours, slowly melting away to represent the melting ice caps of the Arctic and Antarctic. The others, seven-foot tall traditional spruces, have been imaginatively decorated to reflect shark finning, marine pollution, endangered British fish and disappearing coral reefs and will remain in the attraction throughout the festive season. 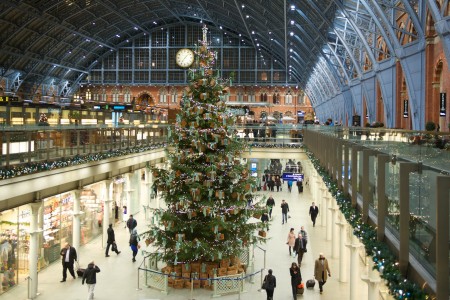 St Pancras International Christmas lights were switched on this year by number one favourite, Jack Topping, the 11-year-old chorister from Liverpool who performed his charity single ‘Tomorrow’, featured on a powerful Save the Children Christmas TV advertisement. In addition to the festive lights, the renowned St Pancras Christmas tree was also unveiled too and this year was provided by Fortnum & Mason, the latest company to take up residence at St Pancras. Standing 35 feet high, the tree is adorned with 2,000 mini hampers, one of the most recognisable and enduring Fortnum’s products.

MADAME TUSSAUDS Christmas Trees and decorations are quite stunning this year and worth a mention. 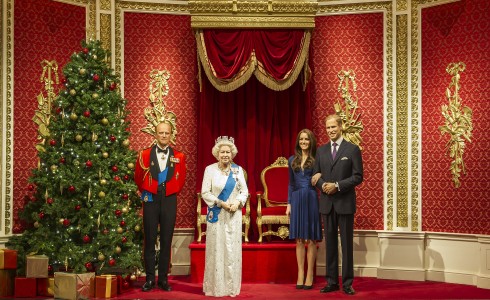 With over 500 metres of garlands, 20 Christmas trees and 100,000 sparkling LED lights. Headlining the Christmas party is one of the world’s most famous celebrity couples, Brad Pitt and Angelina Jolie, who are to be honoured with new wax figures at Madame Tussauds London in time for Brad’s 50th birthday in December. They are much better than the old ones. The new ones look more natural and real. 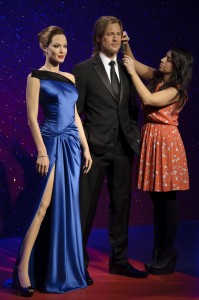 But my favourite discoveries this Christmas in London must be the Vault at the Hard Rock Cafe’ located in the old Coutts Bank (underneath the Hard Rock Cafe’ shop). Is what its name says, i.e. a vault once used by the Queen to keep precious things including Lady D wedding dress before the ceremony, which has been turned into a safe for some of the best and most famous items that once belonged to rock stars. Among some of the most stunning guitars in the world, you can see (and touch) Elvis Presley’s red coat 🙂 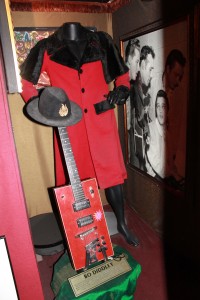 The Vault is still housing the first ever piece of memorabilia donated to the Hard Rock Cafe, Eric Clapton’s Lead II Fender, originally donated to reserve a space at the busy bar, the London Cafe is as charming and authentic now as it was 40 years ago. You will find many of the original serving staff still work the floor here today too! The Cafe is also as famous as ever around town for attracting the best rock stars down for a burger and the occasional “jamming session”. The Vault is often used for interviews with rocks stars when they come to London for concerts.
The Vault is open 7 days a week from 11:30am til 9pm with no admission charge – be sure to drop by!!! Unmissable!!! 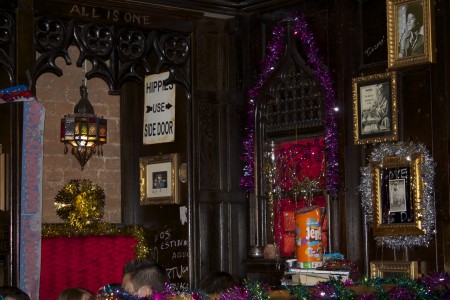 Another great new discovery during my Big Bus tour is the Back Room Bar also part of the Hard Rock Cafe’, in fact it used to be the old shop that has now turned into a bar where you can eat the best pizza in London. Honestly, this is the best kept secret in town! The pizza is crispy and the ingredients are so fresh that if you close your eyes you might for a moment think you are in Italy. The bar looks a bit scruffy at first, but the more you stay there the more you come to appreciate the posters and hard rock memorabilia which hang from the walls.

I hope I have given you some new ideas. And if you stay in London this Christmas enjoy it as this year is at its best!!!

This entry was posted on Thursday, December 19th, 2013 at 12:17 pm and is filed under Attractions. You can follow any responses to this entry through the RSS 2.0 feed. You can leave a response, or trackback from your own site.