This weekend London Mums’ child reporter Maya Benedetti went to the Tower of London to learn how to duel to the top of the class with Knight School. Families can head to the Tower this half term to immerse themselves in the art of chivalry and sword play, test their skills and help repel the deadly invaders. 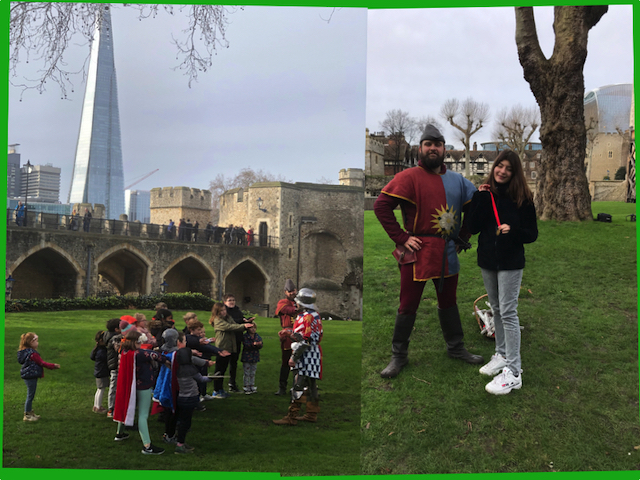 This is what Maya (13) had to say about the Knight School:

“Today’s event at the Tower Of London was remarkable. You get to let us children experience the dream of becoming a knight for a day. The session takes place in the castle of The Tower Of London, on the old Battle Fields. As you walk inside the gates of this magnificent place, you get to feel like a real royal member. After you have crossed these gates, you get to meet the knights that will be the instructors for the day. To become knights children will go through three stages. They will first be page then squire, then knights. They will do many fun activities and will then win a medal with the castle stamped on it. While the medals are given out, there is a ceremony like there would be for a real knight. During the session, the whole fields are filled with laughter and excitement. I would recommend for all children aged ten or below, to come to this amazing event, because it’s really worth it.”

Officially the Knight School was designed for children between 3 and 11 but apart from the foam sword training which was aimed more at young kids, the other activities were pretty much suitable for any age groups, including grandparents.

Families can explore all the essential skills required to become a knight, from manners, etiquette and entertainment, to martial skills and fitness not in any venue, but in the shadow of the mighty White Tower. 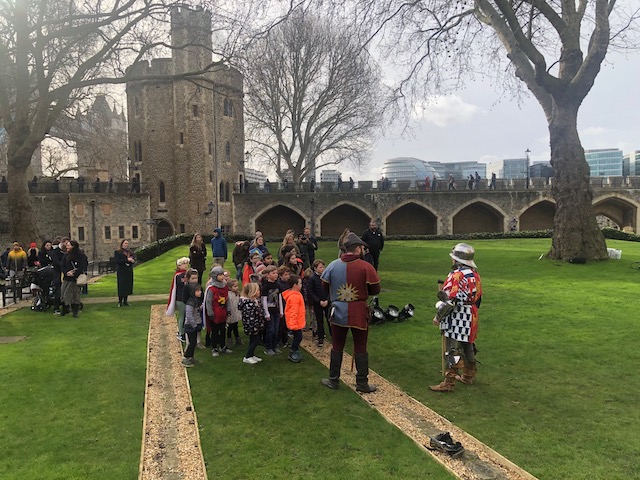 Staff at the Tower of London are excellent at pretending it’s 1471, the height of the Wars of the Roses, and the House of York and House of Lancaster battling it out for the throne of England. While conflict reigns across the land, kids are invited to learn the skills for the warrior grade.

The Tower’s team of battle-hardened tutors guide visitors on a journey of heraldry and valour. They help them train to become a page, then a squire, until at last they are worthy to become a knight. Training will culminate in a knighting ceremony, where brave little warriors will be joined by a host of mediaeval characters, including Elizabeth Woodville, matriarch of the House of York and wife of King Edward IV, alongside her brother Anthony Woodville, 2nd Earl Rivers, dressed in magnificent full plate armour.

Meanwhile inside the iconic White Tower families can get an even closer look at the real-life dazzling armour that forms part of the Royal Armouries collection. Items include the spectacular Line of Kings display – the world’s longest running visitor attraction, featuring the tournament armour of King Henry VIII and the gilded armours of King Charles I and King James II.

Kids can delve even deeper into the heraldic stories of the Tower of London with a series of drop-in activities, from crafting their very own family coat of arms, to armour handling and creating a catapult!

Knight School is included in the Tower of London general admission ticket and activities take place at different times between 11.00 and 16.00 each day. For more information and to buy tickets visit www.hrp.org.uk/towerofLondon 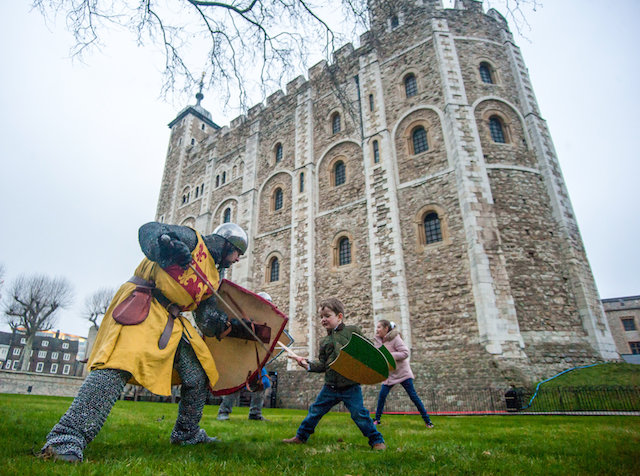 Rufus Murly-Gotto, 3, and Ruby McMenamy, 9, get training at Knight School at the Tower of London. Knight School is an immersive, hands-on live interpretation offer running over February Half Term designed to appeal to domestic family visitors, both for first time and repeat visits. 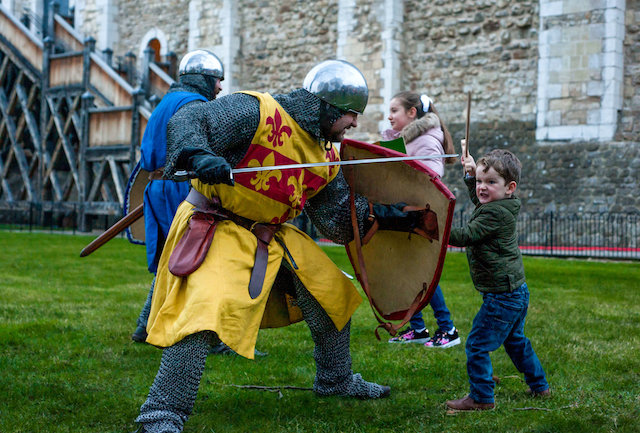 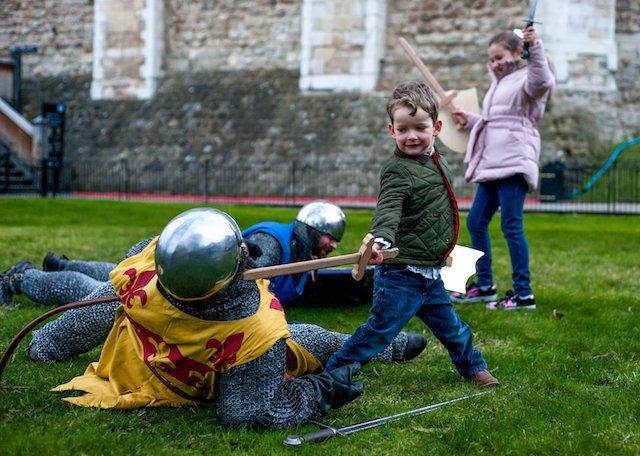 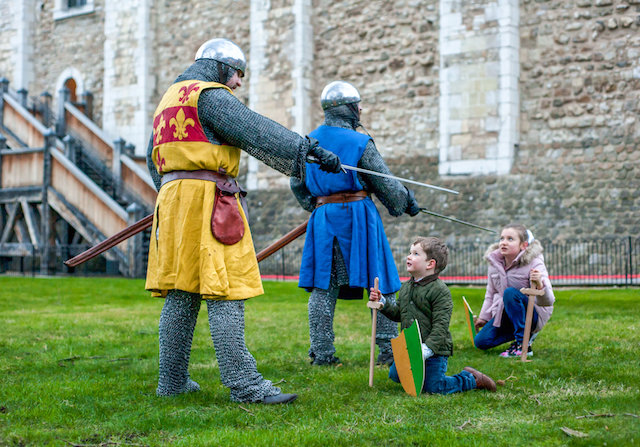 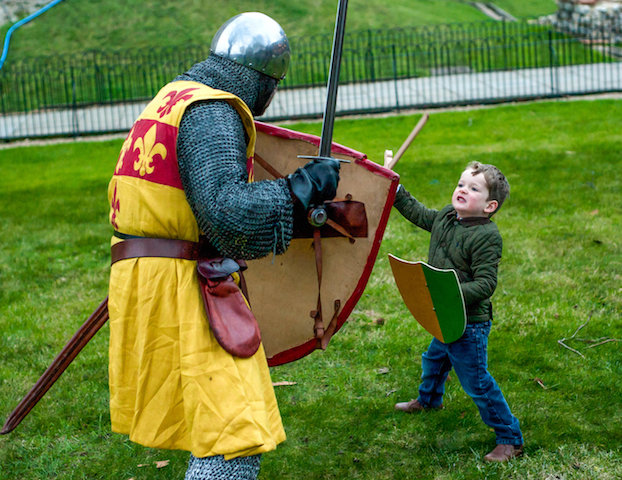 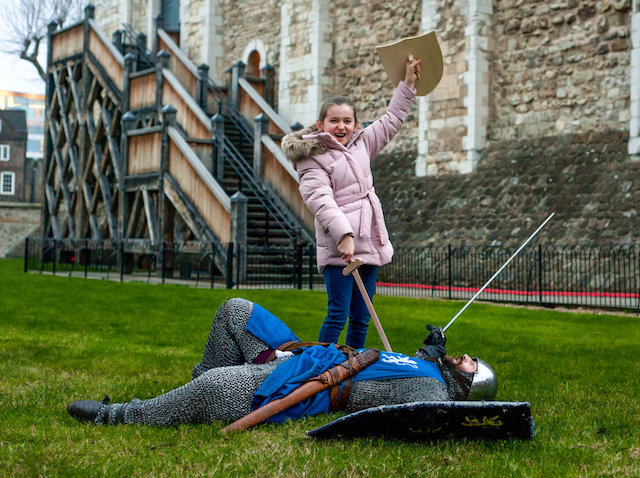 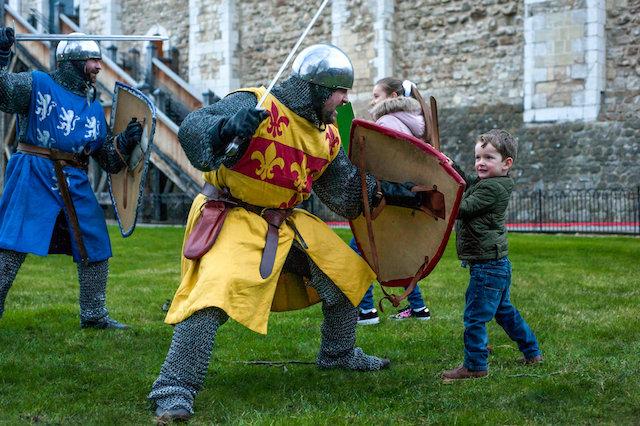 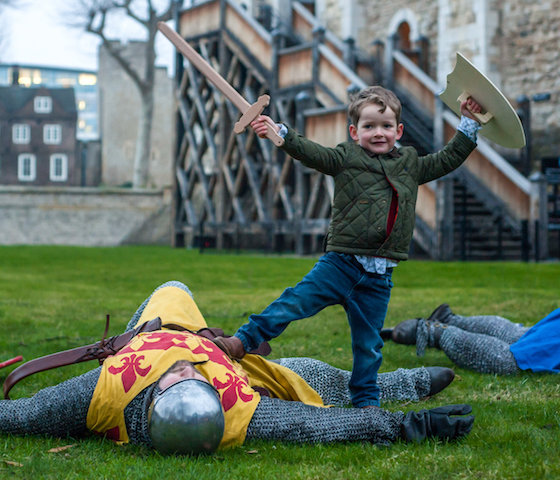 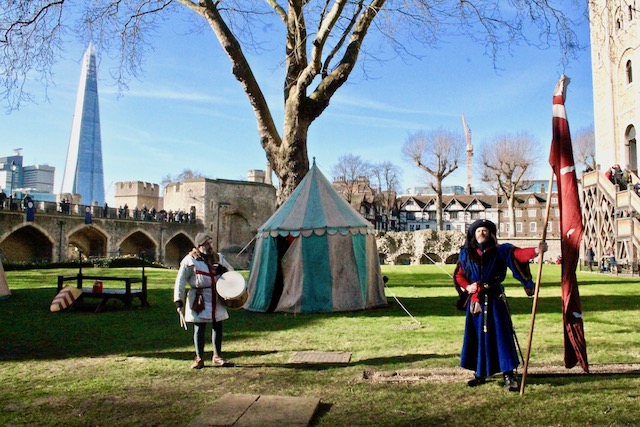 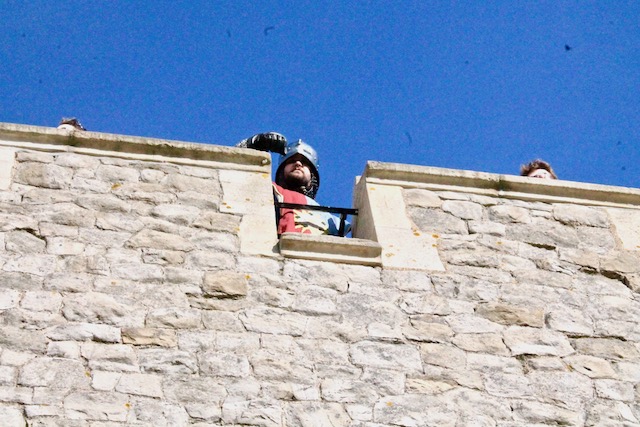 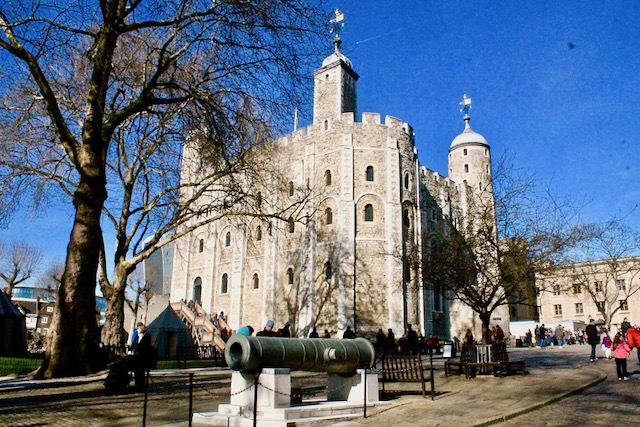 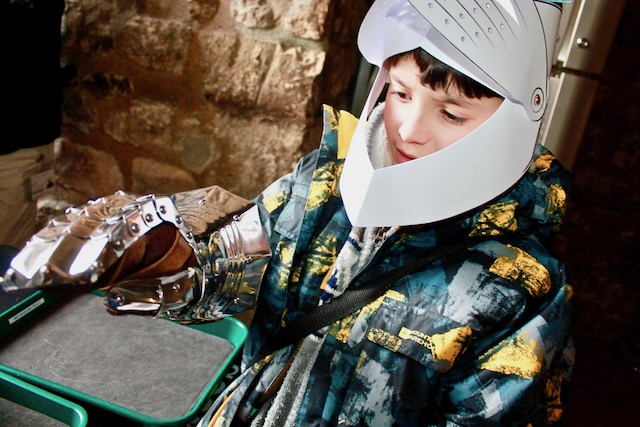 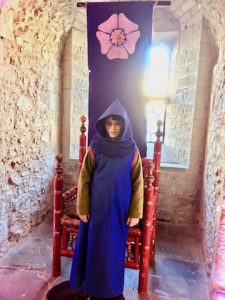 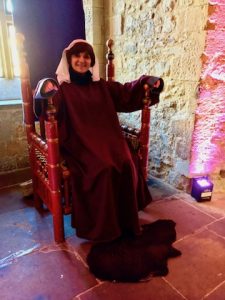 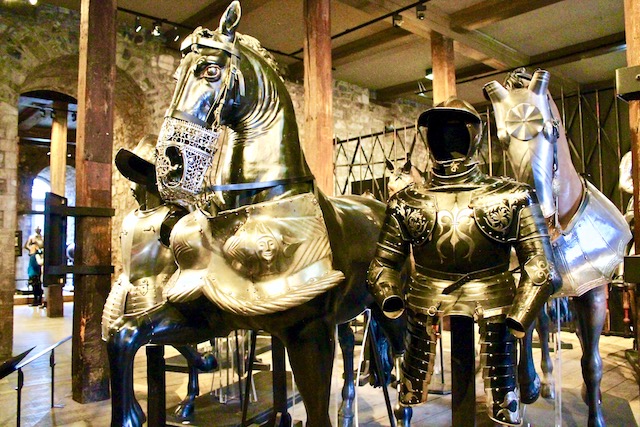 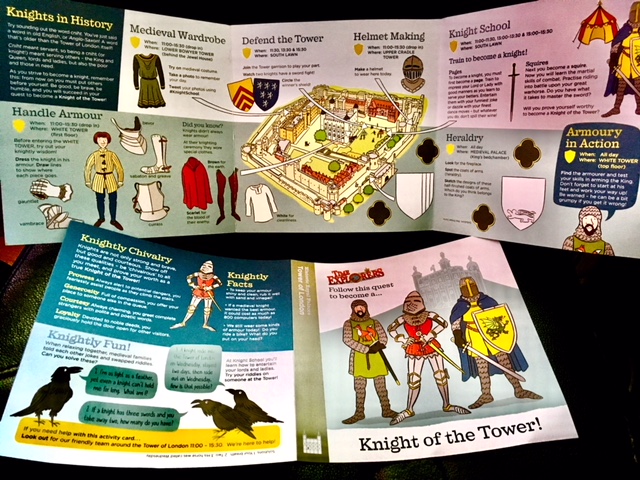 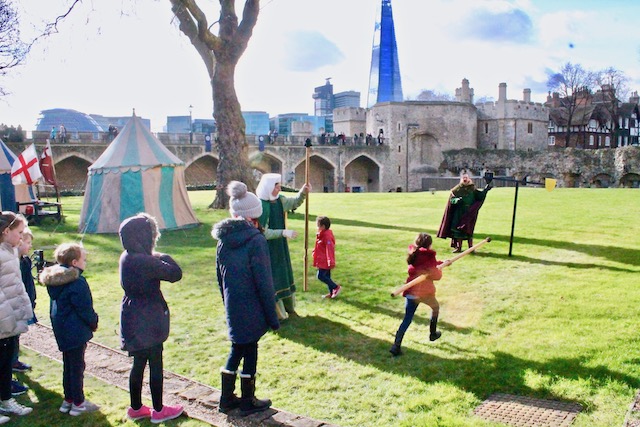 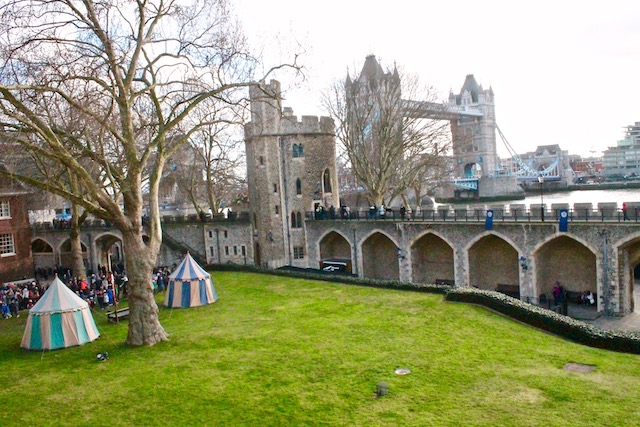 Diego and I could not live the Tower without seeing the Crown Jewels which is the main attraction there. 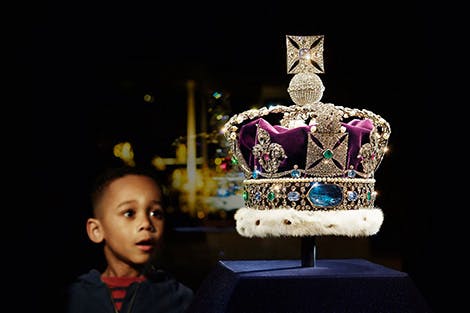 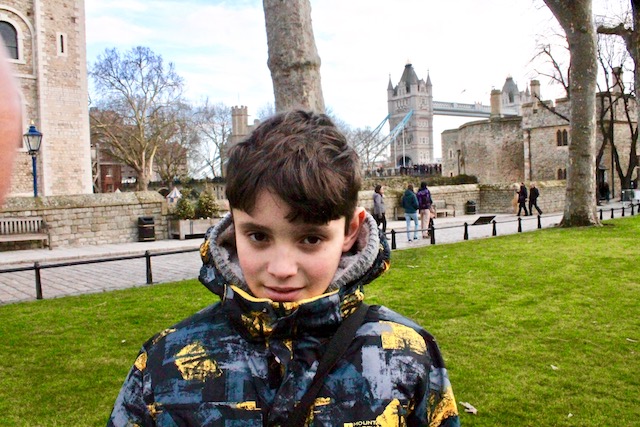 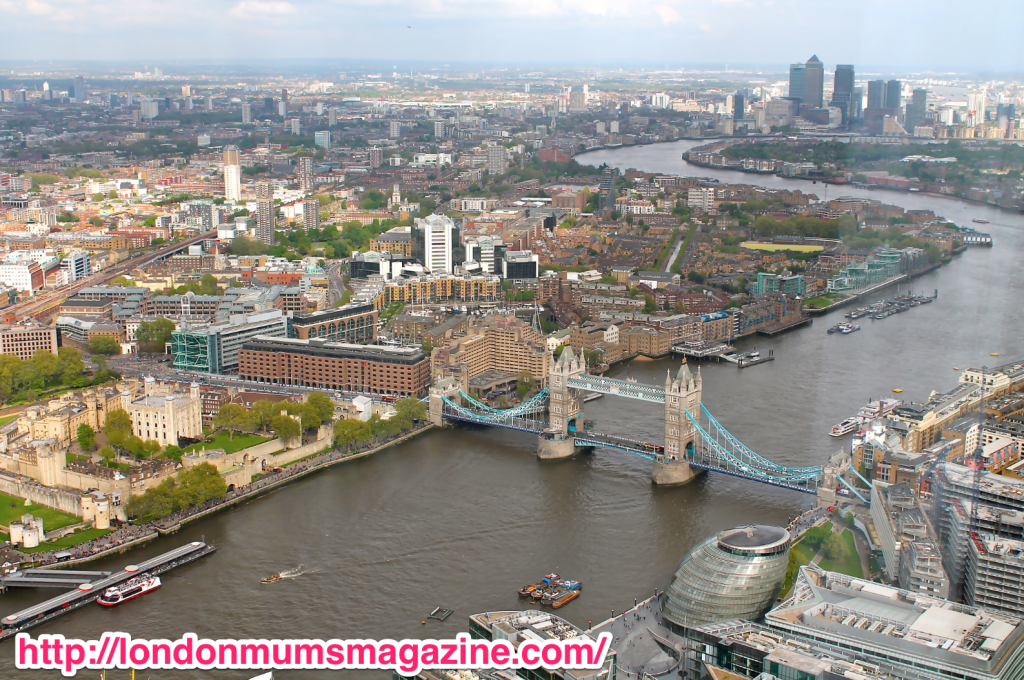 This entry was posted on Tuesday, February 11th, 2020 at 1:15 pm and is filed under Attractions. You can follow any responses to this entry through the RSS 2.0 feed. Both comments and pings are currently closed.