Kensington Palace is incredibly interesting for both kids and adults as it is filled with all things Royal and Fashion to watch. Kids are handed out a pack to solve a quiz about Queen Victoria that keeps them focused during the visit. The Gardens

Spring is the ideal time to browse the Palace’s Gardens which reveal colourful flowers as I have never seen before in Britain. Great photo opportunities too. 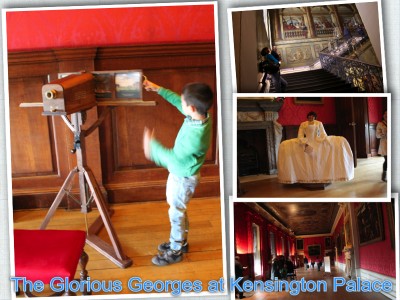 We loved this exhibition showcasing the glittering court of George II and Queen Caroline that burst onto the scene in 1727 at Kensington Palace. The era of music, fashion and the arts is brought to life in the splendid King’s State Apartments. It runs from 17 April to 30 November 2014. There are lots of interesting objects to see like the ‘camera’ which was an early form of entertainment (photographed here).

This exhibition marks the 300 year anniversary of George I’s accession to the British throne, and there are special events and entertainments across three palaces (Hampton Court, Kensington and Kew Palaces) , exploring the lives of the Hanoverian monarchs. During this reign the most influential thinkers of the age gathered to discuss everything from fashion and art to science and philosophy. Within Kensington Palace kids can explore the sumptuously restored King’s State Apartments, have a go at gambling like a courtier, enjoy Georgian music and join Queen Caroline while her ladies dress her in her finery (the actors are brilliant and make you feel back in time).

Entrance to The Glorious Georges and non-ticketed events are included in Kensington Palace admission. Members and kids go free.

Kids have the chance to learn modern British history through this exhibition dedicated Queen Victoria’s long and extraordinary life (in her own words).

Inspired by the Queen’s own journals, and featuring displays of personal objects in the rooms where she once lived, the exhibition Victoria Revealed gives an intimate account of Victoria’s extraordinary life from Queen Victoria’s fascinating life in her childhood home, hobbies and interests that brightened her lonely days, Victoria’s thoughts on Albert, the love of her life, their marriage and her family. Victoria became queen on 20 June 1837. Her reign was as eventful as the times she lived in. The objects from her private life including cots and objects she bought at the Great Exhibition on 1851 are incredible. My 7 year old son (who has no clue about history) really enjoyed exploring how people used to live long time ago. He was very focused as he took the Queen Victoria quiz to find out lots of facts about Queen Victoria.

All girls and women will absolutely love this glamorous exhibition that tells the story of the monarchy in the late twentieth century.  It not only features rare dresses from HM Queen Elizabeth II, Princess Margaret and Diana Princess of Wales, but it provides a feast for the eyes and a nostalgic glance back at recent decades including first editions of the most iconic Vogue and Harper’s magazines.

A great overview into fashion since Queen Elisabeth II has become Queen: A nipped-in waist in the 50s; Diaphanous fabrics and short hemlines in the 60s and 70s; Sparkles and shoulder pads in the 80s. These are the fashion rules we all dressed by – even members of the Royal Family.

Elegant dress displays explores how royal figures were representative of the spirit of each decade, reflecting and inspiring everyday fashions. Amazing photography and film footage took us back to the optimistic 1950s, rebellious 1960s and 70s, through to the extravagant 80s.

Starting with the young Queen Elizabeth in the 50s, the exhibition looks at her evolving style and the way she adopted the fashions of the time and made reference to the countries she visited in the clothes she wore. An exquisite strapless peach silk Norman Hartnell gown from the early 1950s, on display for the first time in over 15 years, typifies the post-war look with its full skirt and sweetheart neckline. The narrower skirt of a later 1961 Hartnell gown shows the Queen’s style changing to adopt the rules of a new decade and is fashioned in the colours of the Pakistani flag, the country where it was first worn.

The wardrobe of Princess Margaret, the Queen’s younger sister, reflected the rule breaking of a more liberal era. From the bold jewel-like colours of her more formal dresses, such as the never before displayed Dior gown worn for the Queen’s Silver Jubilee celebrations, to her more informal wear, including a stunning full length kaftan of ivory sari silk worn on holiday in Mustique in the 1970s, Margaret’s wardrobe captured the greater freedoms of the time.

Diana, Princess of Wales and the 1980s 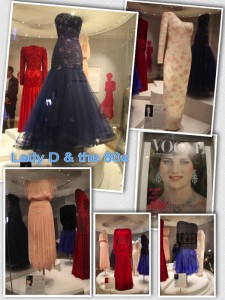 And finally there’s a section dedicated to the style of Diana, Princess of Wales. For the first time, her adventurous exploration of the signature looks of the 80s and 90s are on show – from frills, shoulder pads and big hair to asymmetrical shapes and bold colours. A ballerina length midnight blue and purple dress by Jacques Azagury, on display in the UK for the first time, captures distinctive early 80s fashions with its dropped waist, oversize bow, wide shoulders and sparkling embellishment. Whatever the princess wore it had a huge impact on her public image.

This entry was posted on Friday, May 2nd, 2014 at 12:14 pm and is filed under Attractions. You can follow any responses to this entry through the RSS 2.0 feed. Both comments and pings are currently closed.