When your name is Janet Jackson and your brother is Michael Jackson, your pandemic ‘de-cluttering’ exercise is not just therapeutic for you but also for the charities benefiting from the sales of the memorabilia as well as your spirit. My first trip to Central London after months of lockdown was to the Hard Rock Cafe’ Piccadilly Circus, which not only has some of my favourite steaks and onion rings in town, but also the best rock memorabilia and shop. I made it a day of it, and took the chance to see some pieces from Janet Jackson’s iconic wardrobe and treasures collected during her legendary career and life while a three-day auction extravaganza will take place on Janet’s birthday weekend Friday, 14th May, Saturday, 15th May and Sunday, 16th May 16th, 2021 live in Beverly Hills and online at juliensauctions.com. 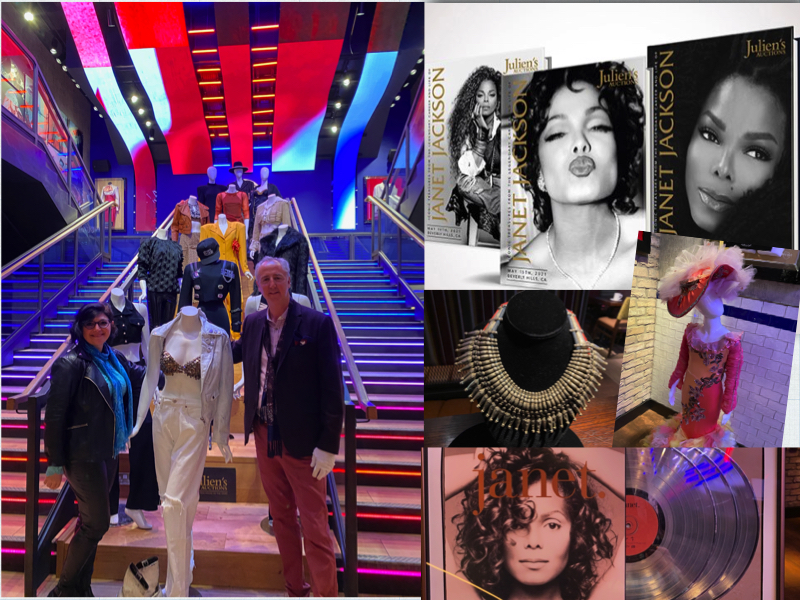 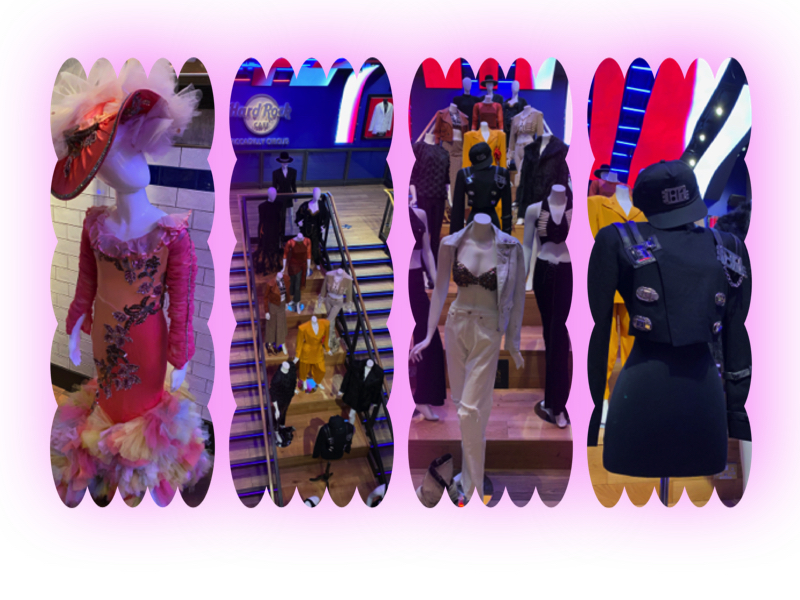 Over 1,000 items from the Preeminent Music Icon’s influential and record-breaking four decade plus legacy include her Epochal Rhythm Nation Tour Jacket with 1814 Metal Plaque Cap and Gloves, Black “Control” and “Nasty” Tour Performance Jacket, Key Earring, Iconic Music Video Costumes such as “When I Think of You”, “That’s the Way Loves Goes,” “If”, “Alright,” “Together Again,” “Let’s Wait Awhile,” “Love Will Never Do,” “Runaway” “Got Till It’s Gone,” and “Scream”, “Rock & Roll Hall of Fame” Award Acceptance Outfit and More to Rock. 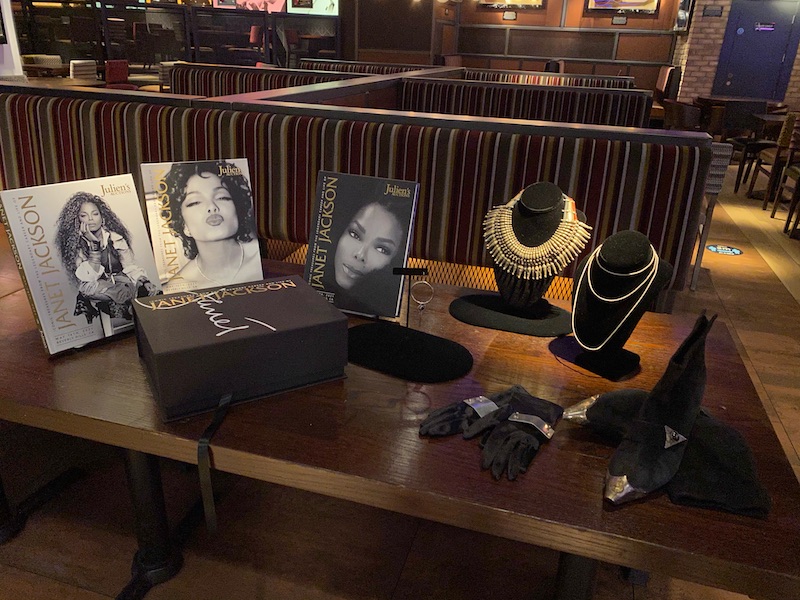 Ahead of the auction event hosted by Julien’s Auctions. I met Martin J. Nolan, Executive Director/CFO, Julien’s Auctions, who told me how this came about. Janet Jackson, who is now a London Mum herself, living in London to follow her son’s education, has decided to donate the proceeds from her memorabilia to a charitable organisation. This hasn’t been an easy process – I can only imagine the pain of letting go of meaningful possessions. Doing it for a good cause helped the exercise. Plus Janet can now enjoy three beautiful catalogues that include all the photographs of her memorabilia.

A portion of the proceeds from the auction will benefit Compassion International, a global child-advocacy ministry that partners with churches around the world to release children from spiritual, economic, social, and physical poverty. Over 1,000 illustrious items owned by one of the world’s most celebrated and accomplished creative forces will be presented by Julien’s Auctions in this one-time only special event. 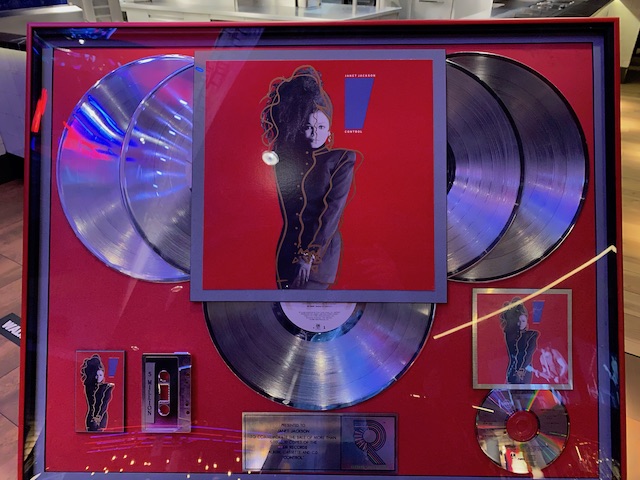 Fans can also have a chance to view the artefacts in the window display of the Hard Rock Cafe Piccadilly Circus 19-23 April, 2021 between 11am and 5pm.

The iconic “Rhythm Nation” ensemble –the black cropped wrap military-style Jacket from Jackson’s career defining 1989 award-winning musical film-short worn on her record breaking 1990 Rhythm Nation World Tour, black “1814” cap and black satin gloves with metal plaque decoration along with other auction highlights–in the window display of the Hard Rock Cafe Piccadilly Circus from 19th April through 23rd April then at Hard Rock Cafe  in New York from 3rd May through 7th May and Julien’s Auctions Gallery in Beverly Hills from 10th May through 14th May before the auction. 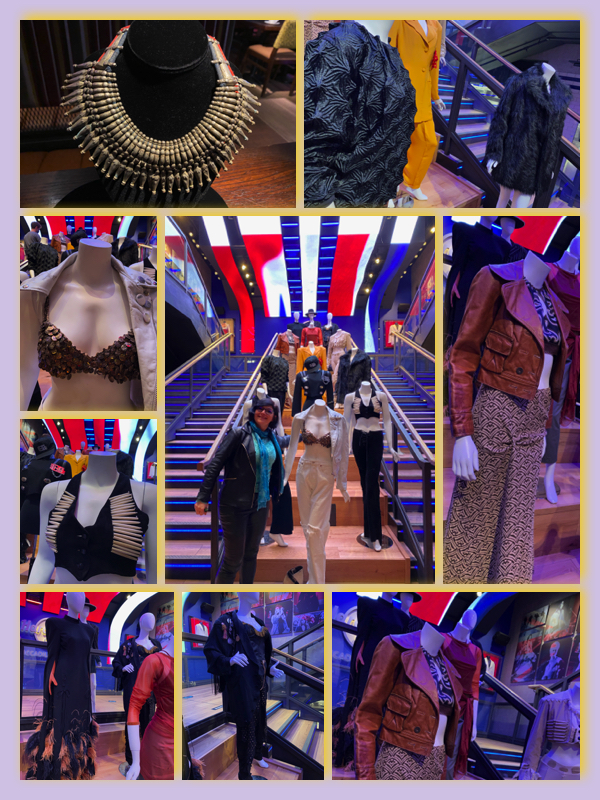 For the full list of items included in the auction, check Julien’s Auctions.

WHERE TO SEE THE MOST ICONIC PIECES:

This entry was posted on Monday, April 19th, 2021 at 5:36 pm and is filed under Attractions. You can follow any responses to this entry through the RSS 2.0 feed. You can skip to the end and leave a response. Pinging is currently not allowed.