FREE EVENT AT THE LONDON TRANSPORT MUSEUM. Meet the author of BEATRICE AND THE LONDON BUS & Father Christmas, and join the  Elf trail at the London Transport Museum on Saturday 17 December. 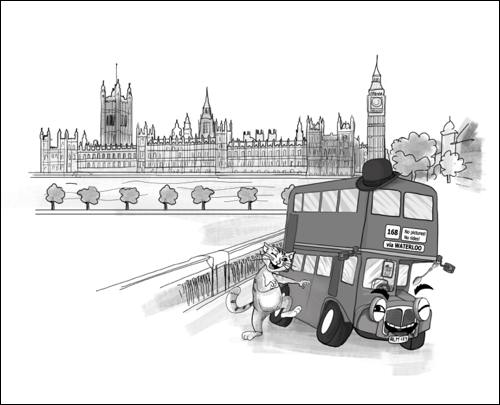 “Bus books tend to be for toddlers or very young children. I wanted to recreate a fully developed three-dimensional Bus character in a real grown-ups world, children could relate to.” Francesca Lombardo – author of Beatrice and the London Bus children’s book series. 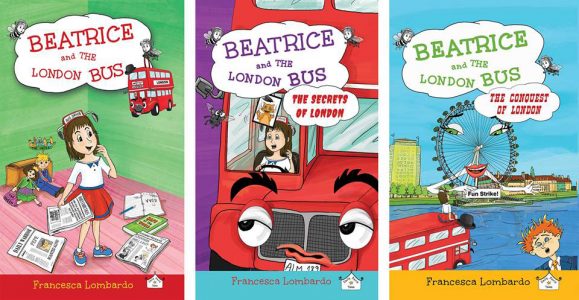 Once upon a time there was a special London bus, generations of Londoners grew up hopping on and off: it was a Routemaster Bus. But for a proper learning experience about the history of the old Routemaster Bus, a visit to the LONDON TRANSPORT MUSEUM  is a must, particularly for children of any age who tend to step out of the venue mesmerised and in awe after a visit.  Often, grown-ups feel the same. One of them is a London based Italian journalist and author, Francesca Lombardo – who, one day, happened to feel inspired by a London Bus parked in front of a Starbucks Café and wrote Beatrice and the London Bus, a three volumes children’s book series centred around the friendship of a curious 9 years old girl, who dreams of becoming a bus driver and an imaginary old grumpy talking Routemaster Bus – RM 168 via Waterloo. 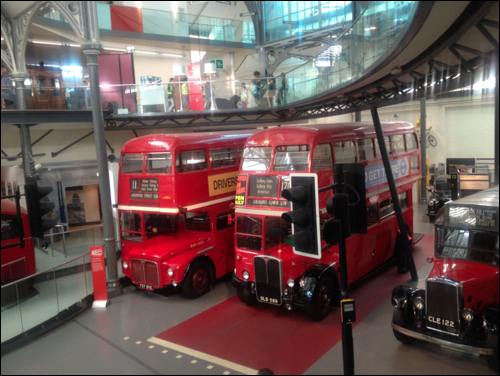 With an inside out  knowledge of the city, and of course of all its secrets and of mysterious inhabitants famous talking buildings, parks and London attractions, the Bus becomes the memory of the city’s past and present, eager to pass his knowledge to the new generations represented  by young Beatrice. 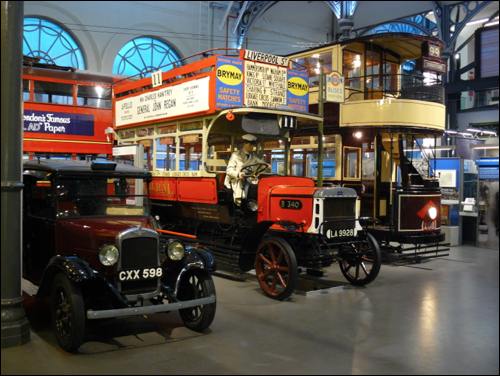 The book series has been already creating a stir among young readers but also major kids’ brands and UK educators: “This is just brilliant! When I was eleven, for me happiness was sitting at the front of the top deck on a double-decker bus … Beatrice’s bus! You can see forever!! We will be so very happy and proud to welcome Beatrice to KidZania London – after all, it takes someone special to drive a bus!” says Dr Ger Grauss, OBE, Director of Education and Partnership of KidZania.

Equally thrilled was Merlin Entertainment which has also sponsored one of the prizes of the recent Beatrice and the London Bus drawing competitions, for having the London Eye as one of the key character featured in the book series. “We’re thrilled that the Coca-Cola London Eye has been included amongst Beatrice’s travels! This is a great book for getting children engaged with our wonderful city.’ 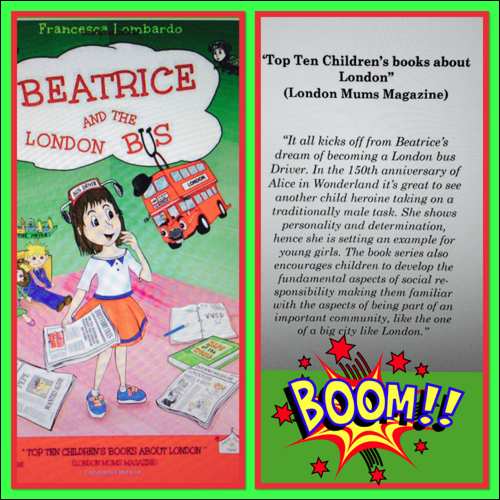 With all bus books currently on the market  toddlers and very young children, the Beatrice and the London Bus book series taps into the 7-11 years old age group and a with its underlying humorous take and satire on London life into the kidult market too.

“I wanted to create a fully developed three-dimensional character that speaks and behaves and has the flaws of a real adult as he deals with the complexity and the challenges of a real city life, modelled on the working and on the dynamics of a very big city like London. Among these challenges the Bus, but also Beatrice, face daily is the interaction with very powerful figures such as a fictional Mayor of London, a Royal authority like the Queen of England, and with all the other characters that represent the city’ key institutions and the types you will come across in any big city. But also, ( I wanted to recreate) the world of the grown-ups seeing with the mesmerised and stunned eyes of a child, in a way that children could relate to it and make sense of its complexities and at times – its weirdness. 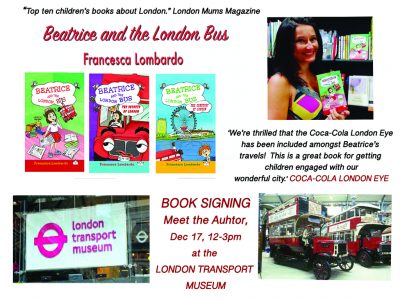 To announce the stocking of the book series at the the London Transport Museum, the beautiful gift shop inside the venue is hosting a BOOK SIGNING and MEET THE AUTHOR event on the 17th of December between 12:00- 15:00 pm where children will have a chance not only to get a signed copy of the books but also to have a one to one chat with the author about about creative writing, the books’s characters and the famous Roumtester Bus character. There is also a chance to win special prizes such as the book series spin off London Maps, the London Map Colouring Books and sightseeing bus tickets on the The Classic Tour. To wrap up the experience, children and parents can browse for beautiful Bus-themed Christmas gifts and visit the Museum, where there is a chance to meet Father Christmas in his grotto when he arrives at the Museum after his journey on the Northern line North Pole Express as well as join the Christmas Elf trail!

Exclusively to London Mums, read an extract from the first chapter of Beatrice and the London Bus. 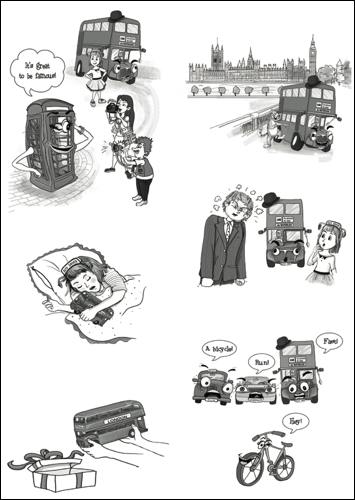 Beatrice looked at herself in the mirror,brushed her hair and put on her favourite hairband.

?‘I would look very good as a bus driver,’she said proudly. She smiled the way she’d smile if a passenger boarded the bus. If she were a driver, she’d probably make some friends — not like at school.

?‘Are you ready, Bea?’ her mum called from the other room but Beatrice was so lost in her dreams that she didn’t hear her.

?‘Bea, hurry up! Come back down to earth and don’t forget to bring your head, please.
It’s always in the clouds!’

?‘I am coming, Mum,’ Beatrice finally replied, checking herself in the mirror one more time.

?Beatrice was strolling down the High Street with her mum when she noticed something nicely displayed in a shop window. She moved closer to get a better look.

?‘That’s the most super-mega-fantastic, galactic-ally beautiful thing on planet earth!’ she shrieked, spellbound.

The thing Beatrice was staring at was red, shiny and looked very important. It was a model bus.

?‘I’ve never seen a bus like that before. This one looks different!’

?Beatrice knew a lot about buses. Unlike most girls of her age she had a real passion

for buses and dreamed of being a bus driver.

?If only she could drive a bus she could visit many places, explore, see things and talk to passengers. Being stuck at home was boring and, the chance that her dream of becoming a bus driver would come true anytime soon was one in a million.

?Plus, her dream made everyone at her school

— where most kids wanted to be footballers, ballerinas, film stars, pop stars, astronauts or simply famous — think that she was a bit of an oddball.

?Her parents, instead, Mr and Mrs Goodenough, considered her obsession with buses a silly thing.

?Beatrice stared at the model bus and noticed

a tiny silver tag next to it, which read 168 via Waterloo — the last Routemaster in the world, who’s only friends with the brave and the bold.

?‘Route … Routemaster … friends with the brave … and the bold.’ The words echoed in Beatrice’s head. Then she saw a sign, which read:

A Routemaster Bus is THE BUS beloved by Londoners and tourists alike. It’s one of the oldest buses in London and the BEST ONE. There is only ONE left in London — THIS ONE. BUY IT NOW and you’ll be the ONLY person in London and in the world to own a Routemaster BUS.

?‘I love it!’ she gushed. ‘Mum, I saw this amazing bus. Can I have it, please?’ Beatrice asked her mum who was standing behind her, checking her mobile phone.

?‘Not again Beatrice! Your obsession with buses doesn’t suit a girl like you. Girls should play with girlish things, not buses.’

?‘Because all fine, charming young girls are

obsessed with buses like you do. You should try to behave like a princess if you want to be a truly fine, charming young girl,’ her mum replied, in a screeching voice which made her sound more like a duck scolding a toddler than a grown-up woman speaking to a child.

?‘What planet is my Mum on? Mars?’ she muttered under her breath. ‘Mum, I don’t want to be charming!   Princesses are useless!’ she retorted, feeling annoyed as usual by that conversation. ‘Why doesn’t Andrew have to behave like a princess?’

?‘I know he’s a boy,’ she replied scornfully.

?Andrew wasn’t just a boy — he was Beatrice’s brother. He was ten years old and didn’t like to play or chat with Beatrice. But just like his sister, he despised princesses, especially the fine and charming ones.

as an ugly fly,’ he would snap at her whenever she bothered him with too many questions.
?Needless to say, Beatrice was terribly disappointed with her brother. She simply didn’t like to be compared to an annoying, ugly fly.

?‘Flies are very tiny, annoying and disgusting — I am not!’ Beatrice would snap back at him, every time he picked on her.

?On the other hand, Beatrice’s mum and dad, who as we know, were very serious people, always said that their daughter had too much imagination, and that her head was always in the clouds. The Goodenough family lived in London — a beautiful, famous city which you will find on the map of the United Kingdom — precisely in an area called Belsize Park.

?Like most parents, Beatrice’s were very busy with work, chores, bills to pay and all that boring stuff parents generally need to deal with. In their spare time, they loved reading. ?

?You could often find them sitting with

their noses buried in magazines, newspapers and sometimes books. They seldom took their children to visit the centre of the city — it was way too crowded for them. ?

?Imagine how disappointing that was for Beatrice. She dreamed of travelling the world, starting her adventurous journey precisely from London — the city where she lived. As it was, life at home was neither fun nor very exciting.

?After coming back from the walk in the

?‘Bea, I don’t really know. I suppose like all

other engines. Your interest in buses is rather peculiar, my dear,’ Mr Goodenough replied, distractedly.

talking about buses?’ squealed Mrs Goodenough, calling her daughter by what had become Beatrice’s official nickname at home.

?However, Mrs Goodenough would never

call Beatrice ugly because she liked to think of

her daughter as a princess. And in her view, princesses were never ugly — annoying

?‘Oh! What a dream-flusher!’ Beatrice

muttered under her breath. That’s how

she secretly called her mum.

?‘Dad, do you think flies and bugs have dreams?’ Beatrice insisted.

?‘Possibly but I couldn’t say.’

?‘Flies and bugs don’t have dreams, Bea, and neither should you. Too much day-dreaming is for time-wasters and time-wasters don’t get anywhere in life,’ preached Mrs Goodenough, breaking into the conversation again. ‘And if they don’t get anywhere, they become losers. You don’t want to be a loser, darling, do you?’?

?Much to Mrs Goodenough’s disappointment, daydreaming was one of Beatrice’s favourite pastimes. In truth, it was her favourite one, after buses of course, which explained why Beatrice always had her head in the clouds.

?Dreams were a thrilling and mega galactic-ally fantastic world — as Beatrice would say — to escape to if someone or something upset her or if life was getting too dull and boring.

?If only dreams were a school subject, Beatrice would have scored the highest marks in London, in the United Kingdom, in the whole world and perhaps even in the universe.

This entry was posted on Monday, December 5th, 2016 at 9:56 pm and is filed under Attractions. You can follow any responses to this entry through the RSS 2.0 feed. Both comments and pings are currently closed.