The summer blockbuster exhibition at the Science Museum in London Top Secret: From ciphers to cyber security opens its doors today. It’s an Inspirational journey for families through British intelligence. An educational and insightful exhibition for kids and parents alike that shows never-seen-before objects to reveal the real life of spies, secret agents and government activities to protect citizens from harmful and criminal acts. 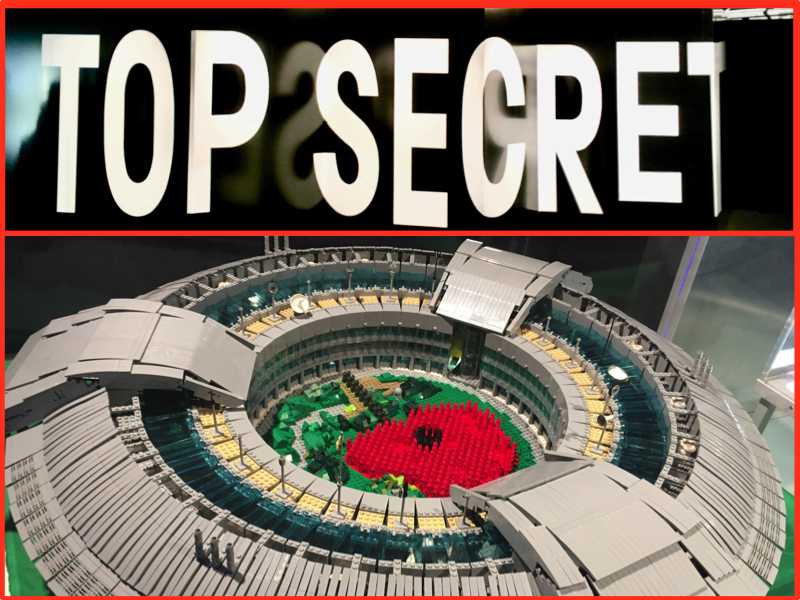 This ground-breaking exhibition explores a century’s worth of communications intelligence through previously unseen artefacts from the incredible collections of GCHQ and the Science Museum Group, and showcases the rich personal and technological stories that underpin secret and secure communications past, present, and future.

It’s the perfect day out during the long school holidays and beyond for children and their families to discover the remarkable world of codebreaking, ciphers and secret communications. It’s FREE, too.

Spy stuff and code-breaking are so fascinating for kids as much as for adults. 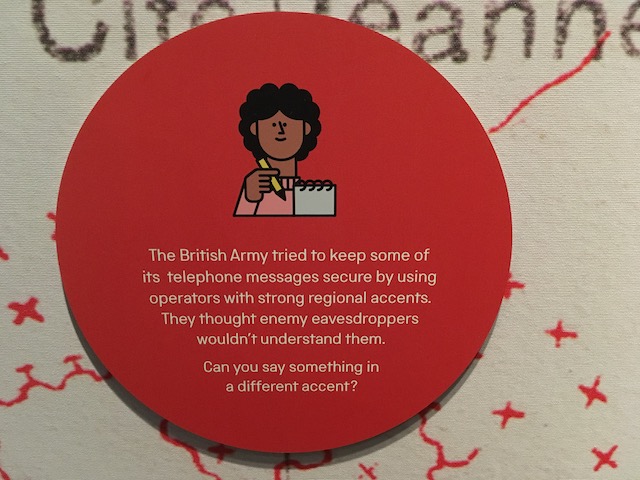 There are red dots displays for children to look out for and take action which will keep them engaged throughout the exhibition. The questions asked within the dots are aimed at not just keeping kids focused and interested along the way but also at inspiring them above and beyond spies’ stories. Kids can also challenge their friends and family to become codebreakers in an interactive puzzle zone.
The exhibition starts exploring the secret messages on trench telephones during the Great War (1914-1918). Telephones then carried vital information on battle plans and troop movements. Germany made the most of this kind of information gathering particularly ahead of the battle of the Somme in 1916, during which thousands were killed. Britain later that year introduced the Fullerphone which modified the signals to make them almost impossible to intercept. 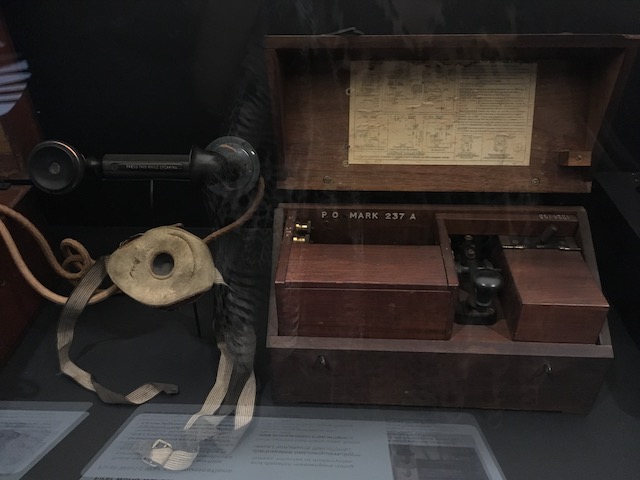 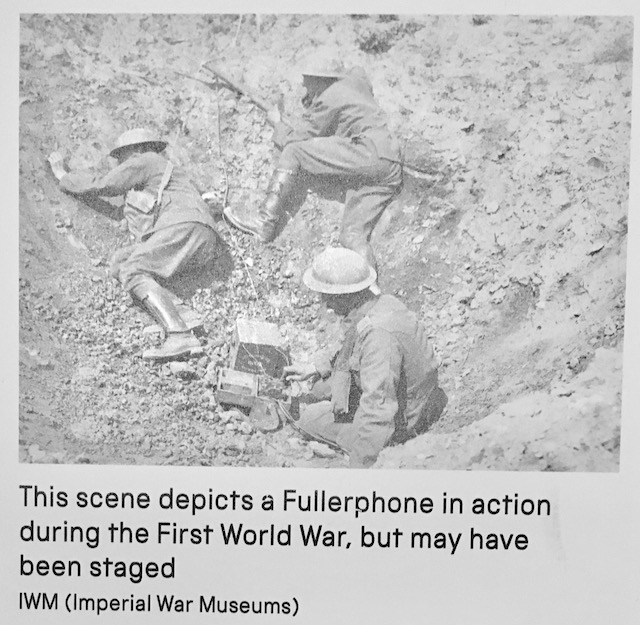 The difference between a code, a cipher, a cipher machine and key is explained by showcasing early British codebooks, handwritten codes and ciphers.
I found the secure telephones of British leaders from 1940s to the present day particularly fascinating. These telephones witnessed some extraordinary moments of 20th-century history. They connected British prime ministers and Queen Elizabeth II to their international counterparts in times of crisis. Kids will find this very interesting as they are mainly familiar with smartphones. 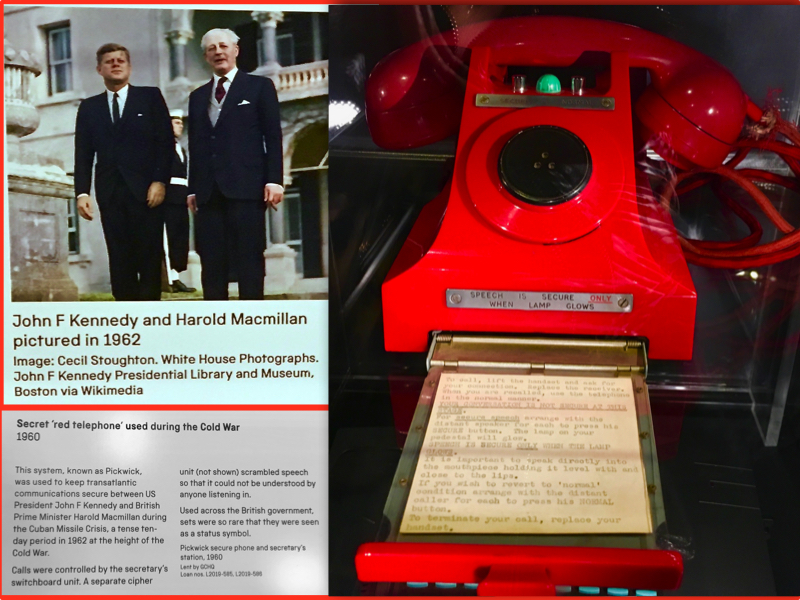 Secret ‘red telephone’ used during the Cold War (1960) This system, known as Pickwick, was used to keep transatlantic communications secure between US President John F Kennedy and British Prime Minister Harold Macmillan during the Cuban Missile Crisis, a tense ten-day period in 1962 at the height of the Cold War. Calls were controlled by the secretary’s switchboard unit. A separate cipher unit scrambled speech so that it could not be understood by anyone listening in. Used across the British government, sets were so rare that they were seen as a status symbol.

From the trenches of the First World War to the latest in cyber security, Top Secret explores over a century’s worth of communications intelligence through hand-written documents, declassified files, previously unseen artefacts, gadgets and devices used to conceal crucial messages and to decode the secrets of others.

There are fascinating testimonials from GCHQ staff doing top secret work to defend against terror attacks and serious crime. They also reveal the challenges of maintaining digital security in the 21st century.

I enjoyed the fascinating story of Alan Turing and the team of Bletchley Park codebreakers who broke the Enigma code in 1941. My favourite section was probably the one dedicated to the ultimate secretive project, the so-called Zircon affair. It was an incident in 1986 and 1987 caused by the planned broadcast on the BBC of a television programme about the ultimately cancelled Zircon signals intelligence satellite, as part of the six-part Secret Society series. It raised many important issues in the British constitution particularly concerning parliamentary privilege and funding of secret intelligence projects. 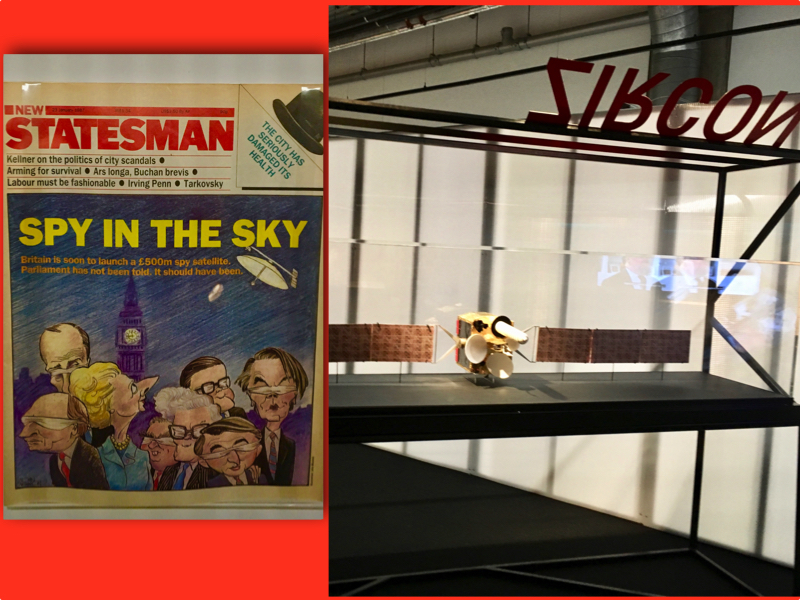 Info at a glance

This entry was posted on Wednesday, July 10th, 2019 at 10:38 am and is filed under Attractions. You can follow any responses to this entry through the RSS 2.0 feed. Both comments and pings are currently closed.