I personally cannot wait for this year Big Game 9 on 27 December at Twickenham Stadium. The Harlequins rugby team who will play Gloucester Rugby recently confirmed that EXTREME will be the headline entertainment act for Big Game 9.

Some of the world’s best BMX and MTB trials riders will combine with free runners to create a number of visually stunning displays during what has become one of the biggest festive sporting events in the UK. 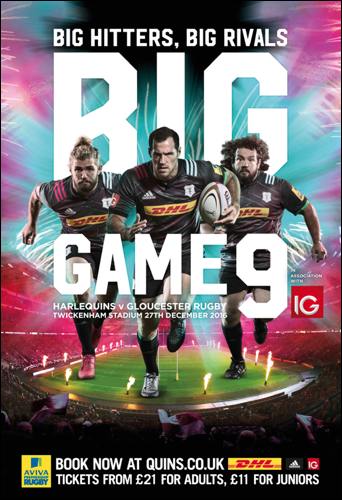 The build up to kick-off in the stadium will see further action around the hallowed turf of Twickenham Stadium. The riders will combine with free runners, Bogdan Pascal and Luke Madigan, to create an engaging and jaw dropping display. The eagerly anticipated ball delivery is going to be the most daring to date.

This pre-match show will be synchronised to a bespoke music mix by a world leading music producer, highlighting tracks that will remind supporters of 2016, a year to remember.

Like Harlequins, EXTREME is an iconic brand. EXTREME encompasses action sports, music and art. Their athletes and ambassadors are involved in major global events, stunts and parties which are streamed across the world.

Big Game 9, a firm favourite in the Premiership calendar, provides an atmosphere like no other as Aviva Premiership rugby is combined with off field entertainment, pyrotechnic displays and a fun festive day out for friends and family.

This entry was posted on Tuesday, December 6th, 2016 at 10:50 am and is filed under Attractions. You can follow any responses to this entry through the RSS 2.0 feed. Both comments and pings are currently closed.