I was extremely pleased to have the chance to speak with Matt from Collabro, the world’s number one musical theatre vocal group who performed to over 55,000 people on their sell out UK tour in 2015, and about to go on a new tour this year!  Since winning Britain’s Got Talent in June 2014, Collabro’s diary has been a whirlwind of touring and promotion on a worldwide scale! They performed on The Royal Variety Show, signed with Simon Cowell’s Syco Music & their career has gone from strength to strength here in the UK & Internationally.

I have caught up with 22 year old Matt Pagan from Carlisle (one of the youngest band members) who acted as a spokesperson for the original five-piece boy band in between rehearsals in preparation for the new tour which includes 29 dates across the UK, starting in the Wirral at New Brighton’s Floral Pavilion taking in a date at London’s Royal Albert Hall on 26th March and then culminating on 3rd April at Guildford’s G Live. This is what he had to say to me…. 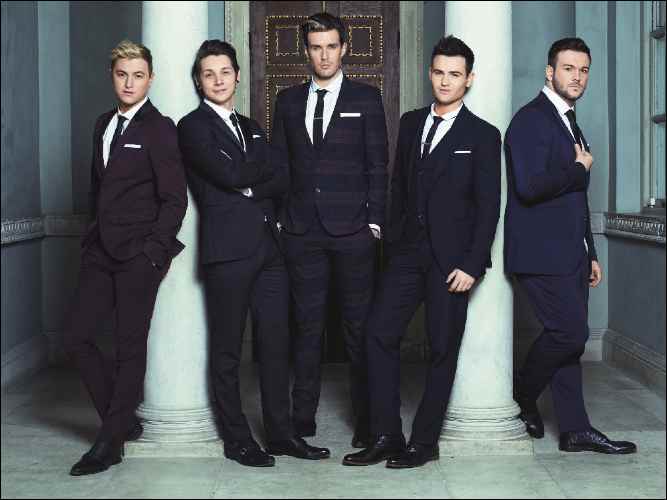 COLLABRO are Michael Auger, Richard Hadfield, Jamie Lambert, Matt Pagan and Thomas Redgrave who first got together upstairs of a north London pub, having met through mutual friends and social media. They released their debut album ‘Stars’ which smashed in to the No.1 spot beating Ed Sheeran in the process and at the time being the fastest selling album for a debut act. A Christmas released special edition of ‘Stars’ followed to further their domination of the charts.

Less than five months after meeting for the first time, Collabro won Britain’s Got Talent and the rest, as they say, is history.

Q: The way Collabro was formed and became popular is a very modern phenomenon as it happened through social media and the so-called collaborators. Who are your fans? How old are they?

Matt: We have people of every age 0 to 99 coming to see us perform.

Q: Why do you think classical versions of songs are so popular right now more than before? It seems to be quite a trend…

Matt: People are starting to get more into classical music and musical theatre. They relate to the stories more and it’s becoming the norm now. We turn songs into our own style. We do a lot of pop crossovers which are often completely different from the original songs.

Q: You have sung Let it Go from Disney’s Frozen. It is a lovely version. Will you have more Disney hits?

Matt: We would love to. We have Circle of Life from the Lion King.

Q: You made it look so easy to form a band from YouTube and win Britain’s Got Talent, but in reality how tough was the whole process?

Matt: In all honestly the whole rehearsal process was very smooth and easy. It was amazing to see so many people coming to the auditions. We rehearsed with one song Bring Him Home which we chose to sing at the auditions. But then we sang Stars and something happened with that song and we realised that this would be the song to use for Britain’s got Talent. We were something completely new so we were not too worried but it was tougher during the live shows.

We didn’t really have a month to do the rehearsal. But we had day jobs so in reality we had a week of rehearsal in total before the show.

Less than five months after meeting for the first time, we won Britain’s Got Talent and the rest is history.

Q: How has your life changed after the huge success of BGT?

We have been very lucky!

Q: Who is the band that has inspired you the most and why?

Matt: El Divo is a big band we look at for their sound and success. We would say we are in between El Divo and One Direction, both Simon Cowell’s creations. He is an amazing person. He is tough but he is very honest and would not be where he is without his honesty.

Q: Have you ever considered a West End Show role in a musical?

Matt: That’s been our dream for a long time. The Jersey Boys is one of my favourite shows and I have seen it 12 times already.

Q: Some have defined Collabro as a musical theatre band? Do you agree? Will you ever explore other musical genres in future?

Matt: Sure we will. We have brought different styles in our pop crossovers. We are doing the Prayer sung by Andrea Boccelli.

Some of us studied music but we haven’t had voice training as such. We are just normal guys and it has worked really well.

Q: Will you one day write your own songs?

Matt: we would love too, but we cannot find the time as we are so busy with tours and performances.

Q: What is Collabro’s favourite restaurant in London?

Matt: We always go to Nando’s.

Matt: A band that brought something different and unique in the music industry. We are five normal guys who sing in five harmonies and bring a lot of different songs to the market.

Q: If you were Joint Kings of Britain what would you do first?

Matt: All the mothers in Britain should get all the flowers in the world as a thank you for existing.

Matt: We are doing a tour of America: East Coast, New York, Boston, Philadelphia, then we will come back to the UK to rehearse and we will be in London at the Royal Albert hall on 26 March 2016.

This entry was posted on Wednesday, February 3rd, 2016 at 11:05 am and is filed under Attractions. You can follow any responses to this entry through the RSS 2.0 feed. Both comments and pings are currently closed.