I recently caught up with ’80s singer and Heaven 17 icon Glenn Gregory who will tour the UK with world class band The Best of Bowie to celebrate David Bowie’s music with classic hit songs from his extensive back catalogue at nine special shows. Heaven 17 is the ’80s band that produced albums such as ‘Penthouse and Pavement’ and ‘Luxury Gap’.
The Best of Bowie formation is the brainchild of the world’s most celebrated producer, the legendary Tony Visconti on bass. Tony has played on Bowie’s first two records and went on to produce ten of David’s albums throughout his career. He will be joined by Tony’s daughter Jessica Lee Morgan (12 string and sax), Paul Cuddeford and James Stevenson (Guitars), the very talented Janette Mason on Piano/Keys, and introducing Steve “Smiley’ Barnard on drums. 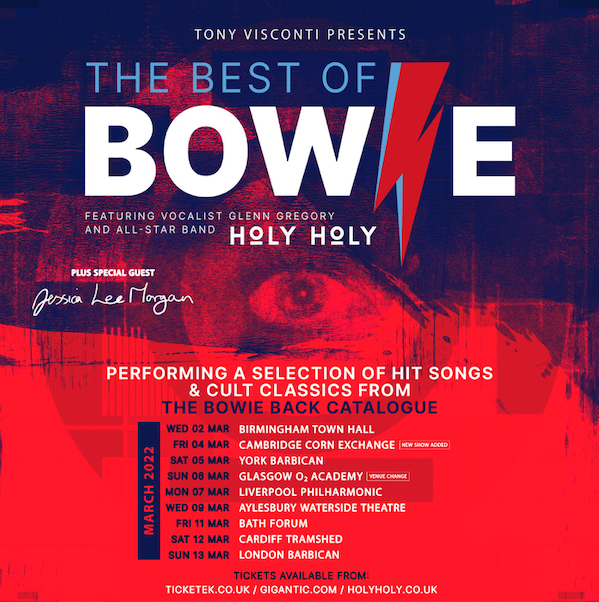 Q: Glenn, why do you think the ’80s are so trendy now? I lived them as a teenager so I love them but many things were so kitsch and OTT (over the top) …
GG: It was a massive decade for good music especially between 1975 and 1988. It’s great for me to come from Sheffield as many bands came from my town. Sheffield was a hotbed of creation with ABC and Human League, Jarvis Cocker, Arctic Monkeys, Thompson Twins, Cabaret Voltaire. There’s loads of artists. Sheffield is a City that likes to do things. Bands did it themselves and found pubs that would let them play. DIY gigging was a thing in Sheffield. Music touched people’s lives. In the ’80s music was at its peak.  It was a real Expressionism including over the top fashion, Glam rock, fluorescent clothes, satin gloves and big shoulder pads. I remember going to clubs in 1980 and 1981 and it felt like being in Hollywood. It was really great fun. 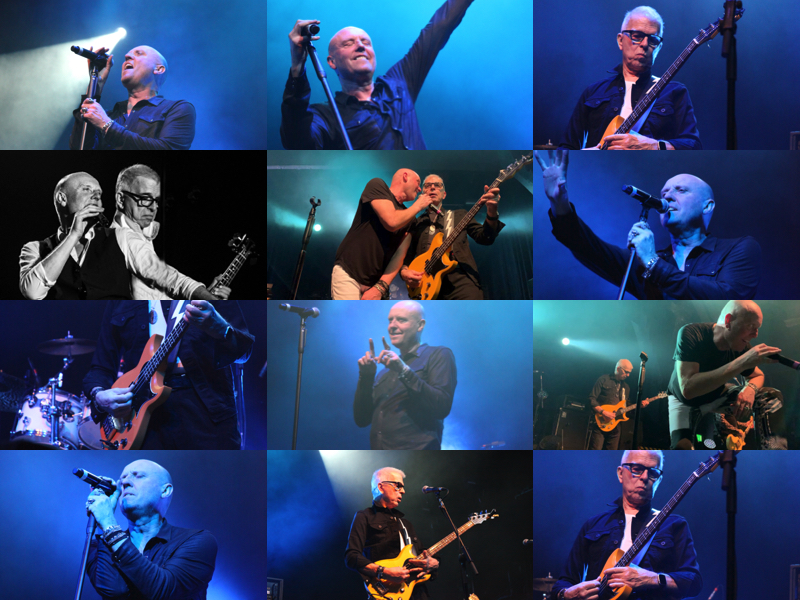 Monica: Now that you’re talking about satin gloves I’ve just bought a satin gloves to go out and dance in a like and once I actually went to a dancing event wearing satin gloves and people said: “Oh you look like a very exotic person”.
GG: Exotic is another good word to describe the ’80s.
Q: What can we learn from the ’80s now? A lesson for the younger generations?
GG: Young musicians who look back at the ’80s can see the joy and skills of that song-writing period and the longevity of the music of that period. Crafting a good song was quite common in the ’80s.
We’re now on forty years of playing this music and it is still as exciting and goes down as well, if not better than it ever did. They are great songs to sing as a lot of songs of that genre are. They are classics now and are good songs not just dance beats that get you excited. There’s something about a four minute ’80s song that is just un put-downable really. It’s like a good book, you’re just going to keep going back to it.
Monica: When Nirvana came along early ’90s we thought the music from the ’80s was rubbish, but suddenly now we are all fans of the ’80s…
GG: That always happens during generational changes.
Q: Bowie has always been ahead of his game and such a visionary. He had so many sides, so many personalities. How do you try to impersonate him? It must be so challenging…
GG: He had a way of finding the future before anybody else. It would be impossible if I tried to impersonate him. When we started to rehearse we agreed that it would be us performing David’s songs but in our interpretation.
The day before he died we were playing in New York and it was his birthday. So we called him from the stage on his mobile and the audience sang happy birthday to him. That was such a joyous moment. That night we got on the tour bus to transfer to Toronto in Canada. It was 2 in the morning and someone from the BBC called me to ask me for a quote on David’s death. I was in shock as i did not even know that he was very ill. He did not tell us because he wanted us to carry on.
Only one member of our band knew it but David wanted us to carry on. The rest of that tour was very difficult with everyone sobbing and struggling.
He had such an incredible personality we grew up with. He was a lasting icon.
Q: What Bowie’s song is your favourite and why?
GG: There are a lot. I find Life on Mars difficult to sing because it is emotional. I sang it when David died and it is forever connected to that moment. It is such a visionary song as we are now going to Mars.  The gigs we play are loud and proper rock and roll without any computer in the room.
Q: Do you have another special memory of David?

GG: The only time I ever met David Bowie in person was in about 1977- 1978, something like that, and The Human League were playing at The National in London, at a pub gig in Earls’ Court / London. I was there with them because we were all friends and there was a rumour going round the place that Bowie had come to see them. We thought it was just gossip but in fact he turned up and after the gig just before the band came off stage, during the last track, I was the only one back stage and the door flew open and in walked David Bowie looking so happy and excited. He grabbed me by the shoulders and said: “F***ing brilliant. They are f***ing amazing. They are the future of music. The Human League are fantastic”. I was just nodding simply saying: “Yes David, yes David” and that was the only time that I actually met him. He went to this superr small pub to find new music.

One of the very earliest gigs I went to see as a young man was Bowie. He played The Student Union in Sheffield and we obviously couldn’t get in because I was only 15, Martin would have been 17 but we made fake Student Union cards and managed to get in and see Bowie.

Q: What Bowie’s song is received by the audiences with most excitement and why?
GG: I think Ziggy Stardust (he sings it)…
Fans go mad when they hear it. It was one of David’s characters. When the song plays, it’s like David’s there.
Bowie’s fans are of all ages from teenagers all the way through to 60, 70 year olds. 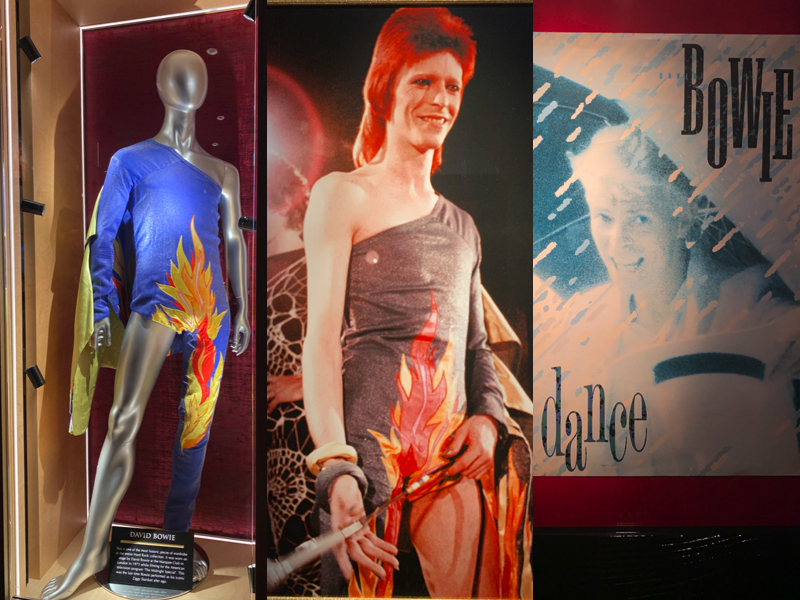 This is one of the most historic pieces of wardrobe in the entire Hard Rock collection and you can see it in the Piccadilly store. It was worn on stage by David Bowie at the Marquee Club in London in 1973 while filming for the American television programme ‘The Midnight Special’. This was the last time Bowie performed as his iconic Ziggy Stardust alter ego.

Q: Who are the fans of The Best of Bowie?
GG: Bowie’s fans are of all ages from teenagers all the way through to 60, 70 year olds. It’s a wide audience. His music reached out many decades.
Q: Is there anything else you would like to tell me?
GG: Sadly, Woody Woodmansey, Bowie’s early drummer, who was due to tour with us is unable to make it as Covid restrictions at the time of inception made it difficult for him to join as he is unvaccinated.

GG: Thank you for this chat, Monica. It’s been a pleasure.

If you were lucky enough to catch these accomplished musicians on tour as Holy Holy, you will know that Tony Visconti, Glenn Gregory, and the talented band deliver an excellent show, filled with an intoxicating mix of adoration and respect for a true innovator that is the one and only David Bowie.

This entry was posted on Thursday, February 24th, 2022 at 1:30 pm and is filed under Attractions. You can follow any responses to this entry through the RSS 2.0 feed. Both comments and pings are currently closed.