Exclusive! Iconic 80s singer Paul Young talks his 35 years career, the No Parlez tour and his passion for cooking

Rosalba Costantini and I hit the road again today to meet a raising star in the firmament of contemporary country music, Liv Austen, at the first gig to launch her debut album. So we look back at other interviews with music icons including Paul Young and Zucchero from our latest print magazines. Everyone’s favourite 80’s crooner Paul Young is back on tour this Autumn, performing his debut album No Parlez in celebration of 35 years since its release (1983). 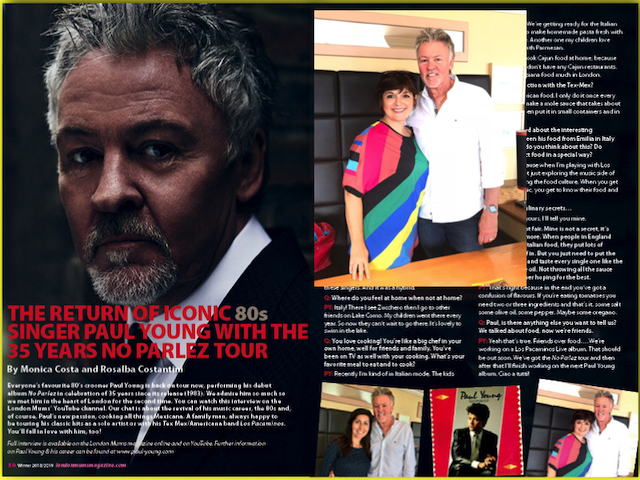 We met him in the heart of London for the second time and we admire him more at every new conversation we have with him. You can watch this interview on the London Mums YouTube channel. Our chat is about the revival of his music career, the 80s and, of course, Paul’s new passion, cooking of all things Mexicana. A family man, always happy to be touring  his classic hits as a solo artist  or with his  Tex Mex/ Americana band Los Pacaminos. You’ll fall in love with him too!

Q: It seems yesterday that your album came out. How much has Paul Young changed musically and personally in the last 35 years?

PY:  Well, it is probably a far bigger change in my life in those 35 years. I was single then, I have a family and children now.  So many things have changed. But when No Parlez came out my whole world changed. My life changed. It will never be the same again. It’s all been good so far. 90% good.

Q:    35 years of career in music. Would you change anything if you could go back in time, a time machine?

PY:  I maybe would have worked harder at writing songs. It is something I got better at as I got older. When I was younger I didn’t have patience for writing songs.

Q: One of your loyal fans in Italy, Giampaolo, said that your cover version of Joy Division’s Love Will Tear Us Apartis the best ever. People still carry your songs in their heart.

PY:  It’s funny how certain songs like Every Time You Go Away mean a lot especially to those people who work in the air force, the army or the navy and get that separation.

Q: Last Summer we interviewed your great friend Zucchero who speaks so highly of you. He calls you a family friend. He mentioned your Italian holidays at his place. What are your memories about those holidays in Italy?

PY: We used to go there all the time and it wasn’t just myself and Stacey and the children but even my mother-in-law. The whole crew. We were staying at Zucchero’s house because he loved the company. And he was very clever in that he toured most of the year and when it came to the summer he would actually stop and enjoy the season. He would still have meetings with management and accounting and things, but would find the time to go to the beach together with our children and his friends. He would have such a good time. 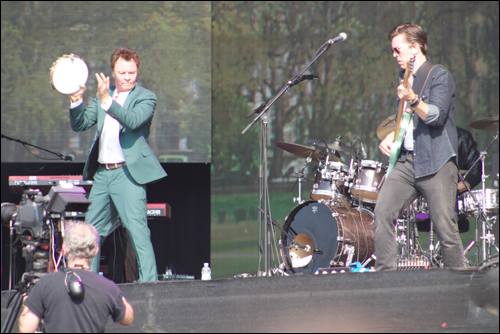 Q:    Who was your musical inspiration? I asked the same question to Zucchero. And when you were a teenager what made you come to this type of music now?

PY: It’s like a progression of things really. The first thing I listened to when I was 12 years old was English rock music. I grew up with English rock bands as well as American musicians like Otis Redding, Wilson Pickett, Sam Cook, Joe Tex.

Q: Zucchero also said that he was inspired by Otis Redding.

PY: I started to build my own music from the base. And then it just became whatever it became. I just let it happen, it just came out.

Q: Over your 35 years you played with many people including  a duet with Zucchero of his song Senza una donna (Without a woman). The combination of the two voices in that song is extraordinary. That song was meant to be sung by you two. Are there any other duets you would like to do or any people you would like to work with? 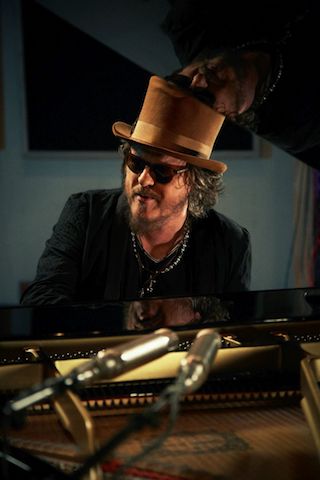 PY:All of the duets kind of happen by accident. Zucchero came to a studio where I was recording and we met so then I only heard one or two things. But then Zucchero released his first big blues’ album then we got to know each other and decided to record together. The same happened when I did a duet with Chaka Khan on the Other Voices album. I went to a Stevie Wonder concert and she was there and we started a conversation. It’s been a happy accident. 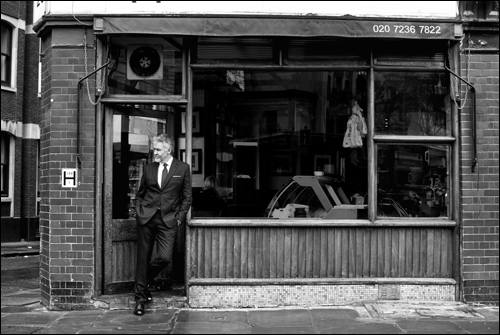 Q: What advice would you give to young musicians?

PY:Musicians now have more distractions. The music industry is a very different animal now. The music is not the same. It is difficult for me to give younger musicians advice because the ones I know are doing very well. They’re ready to move from one band to another because with fans there is not so much loyalty. And in the 80’s when they liked somebody, they would buy all the albums. But now they buy the first album and if they listen to the second album and don’t like it as much they go somewhere else. So, the mentality of the musician now has to be different.

Q: You have been with the band Los Pacaminos 25 years. So you’ve been very loyal to them, but obviously there is something special between you and the guys.What is it?

PY:  We’re going to Italy for the first time in two weeks.

PY:  There is a special bond. The band includes seven of us and we are very very close. It is a very happy music. When you get older in the music business you want to enjoy the music as much as possible. So I play a happy kind of music. The ballads are quite romantic, and the up tempo songs are just a very happy music.

Q:    Maybe one day you could create some Mexican soul?

PY: Well that was how it started. Ry Cooder first kicked this kind of thing. He had three R&B singers. Really good ones. Bobby King and Willy Green Jr. and Terry Evans, lovely voices. Underneath these voices some are playing the bajo sexton and some are playing the accordion and an Mexican drummer. Mexican drummers are very different to the way an American drummer plays. It’s slapping. So I was interested in why Ry Cooder would choose these musicians beside these singers. And it was a hybrid.

Q: You’ve been touring a lot of countries. In which country have you received the warmest welcome?

Q: Where do you feel at home when not at home?

PY: Italy! There I see Zucchero then I go to other friends on Lake Como. My children went there every year. So now they can’t wait to go there. It’s lovely to swim in the lake.

Q: You love cooking! You’re like a big chef in your own home, well for friends and family. You’ve been on TV as well with your cooking. What’s your favorite meal to eat and to cook?

PY: Recently I’m kind of in Italian mode. The kids want more pasta. We’re getting ready for the Italian holiday. So, I like to make homemade pasta fresh with basil. It’s very easy. Another one my children love basil and lemon with Parmesan.

But then I like to cook Cajun food at home, because here in the UK we don’t have any Cajun restaurants. We don’t see Louisiana food much in London.

Q:    And the connection with the Tex-Mex?

PY:  I also love Mexican food. I only do it once every six months, but I make a mole sauce that takes about four hours but I then put it in small containers and in the freezer.

Q: Zucchero talked about the connection between food and music. Which is quite interesting. And he mentioned that he thinks that there is a connection between his food in Italy and blues. And the food he eats is like the food that effects the blues. When he went to Louisiana he saw that they were eating the catfish that he was eating in Emilia. What do you think about this? You think musicians connect food in a special way?

Q: Tell me your culinary secrets…

PY: If you tell me yours I’ll tell you mine.

Monica: That’s not fair. Mine is not a secret, it’s out there: less is more. In Italian cuisine less is more. People in England or America, when they cook Italian cuisine food, they put lots of stuff in. But you just need to put the right ingredients and taste every single ingredient like the best basil or olive oil. Not throwing all the sauce and spices together hoping for the best.

PY: That’s right because in the end you’ve got a confusion of flavours. If you’re eating tomatoes you need two or three ingredients and that’s it, some salt some olive oil, some pepper. Maybe some oregano.

Monica:  If you add Origano it tastes like pizza. In Italy we use it only very scarcely because it is strong. You cover everything up otherwise.

PY: Well Mexicans have their own oregano. It’s even stronger. You have to be very careful with that. I’ve got a rule: I haven’t got a rule for all food. When I make a red pasta sauce, a red tomato pasta sauce, I reduce it just a bit more to leave a concentration of the flavour. It is much stronger.

Monica:  Like ragu’ alla bolognese. You need to slow cook it for at least four hours. Slow cooking is also like going back to the 80’s when we used to live at a slower pace. I would like to go back with a time machine for just a week in the 80’s. Wouldn’t you like that?

PY: That would be very interesting.

Q:    Paul, is there anything else you want to tell me? We talked about food, now we’re friends.

PY:  Yeah that’s true. Friends over food…. We’re working on a Los Pacaminos Live album. That should be out soon. We’ve got the No Parlez tour and then after that I’ll finish working on the next Paul Young album. Ciao a tutti! 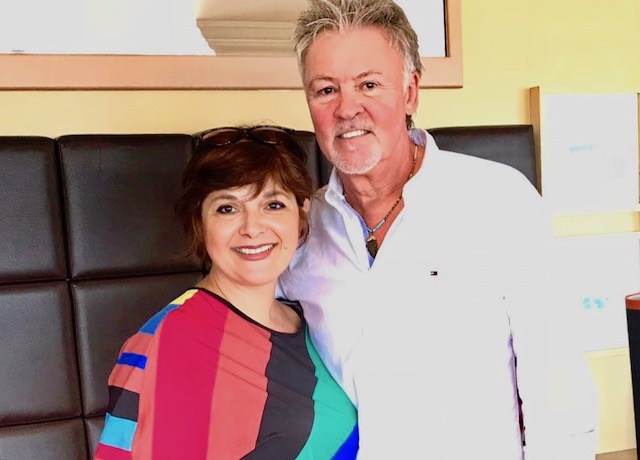 Further information on Paul Young & his career can be found at  www.paul-young.com 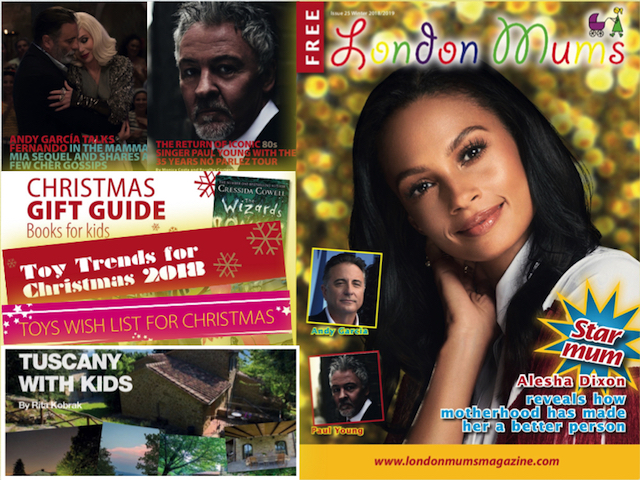 This entry was posted on Tuesday, November 6th, 2018 at 2:21 pm and is filed under Attractions. You can follow any responses to this entry through the RSS 2.0 feed. Both comments and pings are currently closed.