“This ain’t like no other song you’ve heard today.” Emily Capell’s lyric on her track, ‘Bombs to the Beatles’, is the perfect summary of her debut album Combat Frock, released in October. North West Londoner Emily Capell creatively fuses together highlights of pop, punk, blues & Indie, presenting the perfect image of a young British Mod. Following in the footsteps of Lilly Allen and Kate Nash, Emily Capell demonstrates what it means to be quintessentially British standing out as a unique musical talent in the thriving hotbed of the UK music scene. 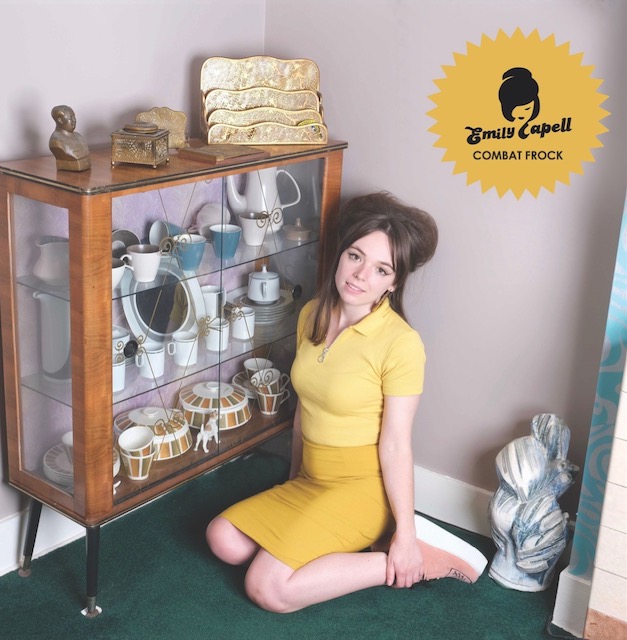 Incorporating sounds of noughties’ indie rock bands like Arctic Monkeys and The Libertines, the ska revival sounds of the late seventies from artists such as The Specials & The Clash and evident inspiration from the rock ‘n’ roll sounds of Marty Wilde in the late fifties, Combat Frock manages to embrace all the major elements of British musical history. Setting a light 1950s’ vintage theme, Emily tantalises the listener with infectious, up beat and feel-good tracks such as, ‘Ispo Calypso’, and, ‘Bonanza’, that are just too irresistible to not dance to. 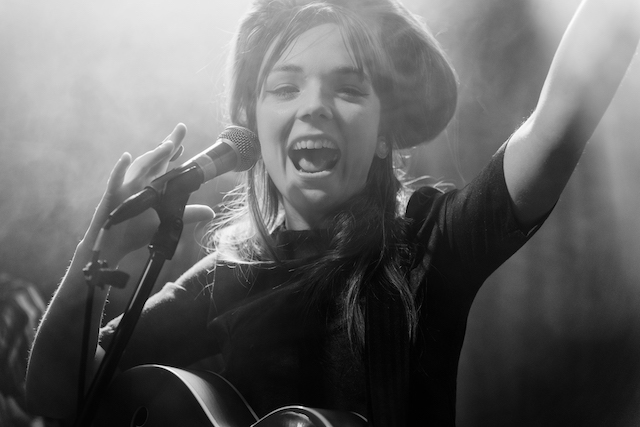 Putting the icing on the cake, Emily muses over the world we live in, by virtue of a selection of pop-culture references and tongue-in-cheek lyrics such as a girl’s secret desire to marry a rich man in, ‘I Found A Footballer To Marry Me’, but Emily is no shallow songstress. In the slow and sinister ‘Smiley Culture’ she’s intent on showing the world what we are doing to our planet and the brutal social media societies that we’ve created. Petite in form, yet brave and outspoken, Emily even goes as far to name and shame Morrissey for being a racist in ‘Ode to Uncle Moz’ 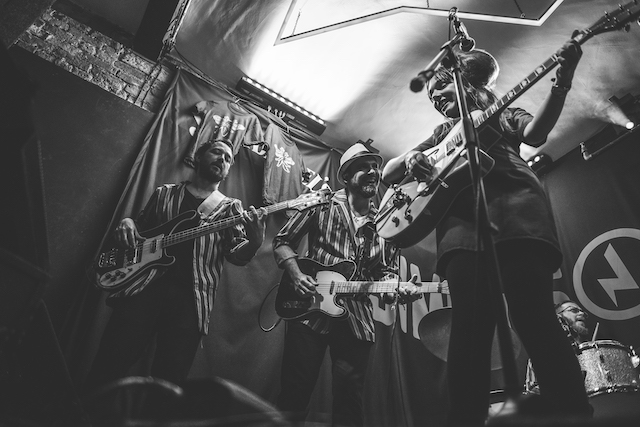 Emily Capell’s musical prowess on stage has been steadily growing over the last few years with performances at Glastonbury, Latitude, Secret Garden Party, Beautiful Days and many more. She started out 2 years ago with a Jack FM stage slot at Cornbury Festival and was then spotted and adored by the promoter so she was invited back for a main stage performance the following year. She also won Best Newcomer at the 2018 Boisdale Music Awards, hosted by Jools Holland and supported The Spitfires on tour. Furthermore, Emily has performed live on Gaby Roslin and Robert Elms’ BBC London shows as well as monthly residencies at Proud Galleries and the Dublin Castle in Camden Town. She’s had support & plays on X Radio, 6 Music, Amazing Radio, Union Jack & Shoreditch Radio and can count celebrities such as actor Matt Horne (Gavin & Stacey and The Catherine Tate Show) and ex-QPR premier league footballer Joey Barton among her fan base. 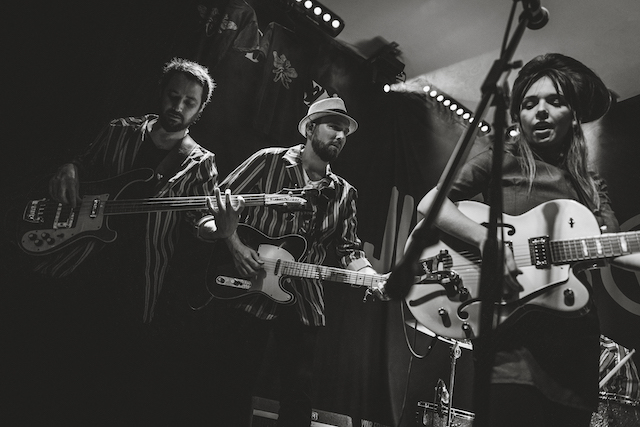 I was lucky to catch up with Emily ahead of her album tour.

Monica:                       Well, congratulations. I’ve listened to your album and Combat frock is the kind of music I really like. How would you define the genre? Who has influenced your music the most?

Emily Capell (EC):          There’s some country, blues and rock in there. The Clash had an album called Combat Rock. I wanted to give a nod to them and appreciation and add something girly to it. My biggest influences are The Clash, so I just wanted to get a nod to them really. And then Kirsty MacColl, Jimi Hendrix and Amy Whinehouse.

Monica: I love the references to all the sixties to eighties personalities in your lyrics. Like for example, Danny Zucco from Grease, Kurt Cobain, the Beatles. Would the youngsters understand the lyrics, all this nods and references, though?

Monica:                       It was about time that someone brought back this traditional rock ‘n’ roll. Why do you think blues and rock and roll would appeal again to a generation that seems to be so absorbed in electronic music?

EC: I don’t know. Nowadays everyone is into electronic music. I think that you kind of have to mesh them up together and make something that sounds like 2019. 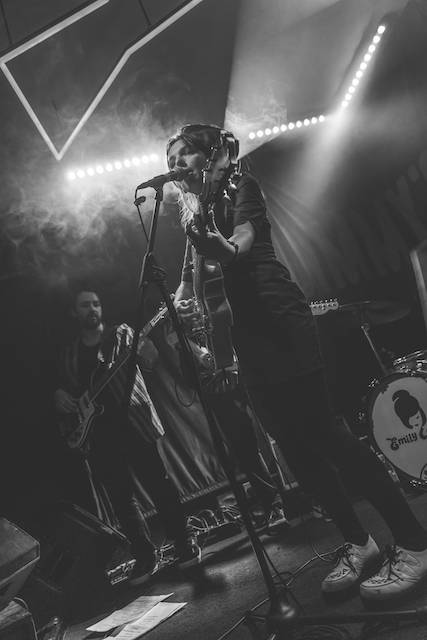 Monica: That’s a good idea. I think your music has that vintage feel, which is actually very contemporary because now everything that is vintage is back on trend. Someone has defined you as a young British Mod.

Monica: Emily, you totally underestimate yourself. The process of writing songs is such a smart thing to do. In fact, I wanted to ask you about that. Tell me about the song writing process. How does it work for you? How do you start?

EC: I start with music and then the lyrics, but I’ve usually got an idea of what I want to write about.

Monica:  What inspires your lyrics?

EC: It depends. Lots of stuff inspires me. It could be anything like social media, what people are saying and what people are writing on social media. Sometimes a newspaper article, going out, having a look around. If it’s always looking at people, people in general, different characters, what I see about them, what I can relate about, really. 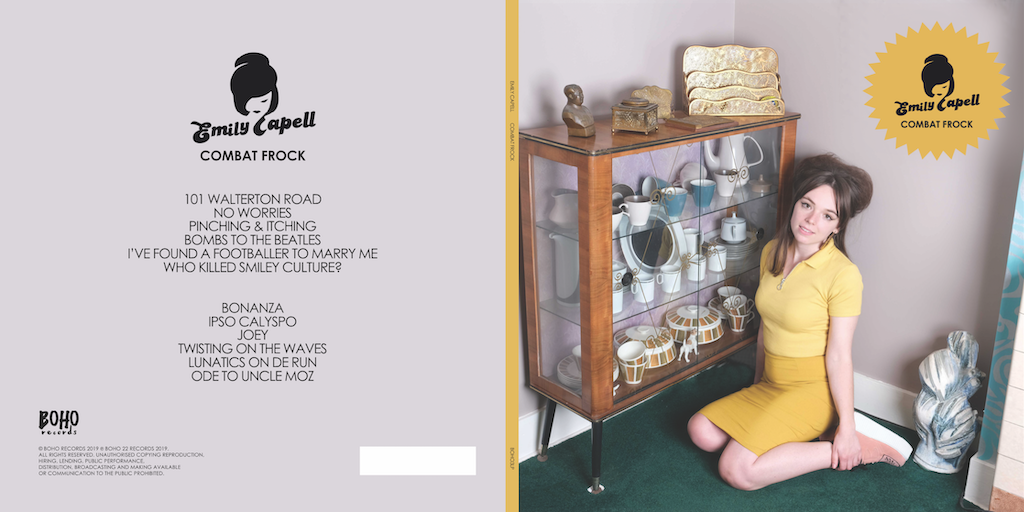 Check out our child reporter Maya Benedetti’s own interview with Emily at Cornbury Featival in 2017. Such a sweet and honest  chat. I am so proud of Maya and her dedication as a young reporter for London Mums magazine! 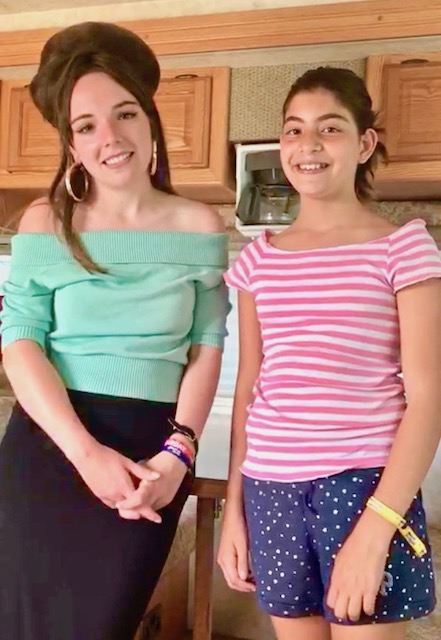 Emily Capell and her band will be performing with The Selecter on their 40th Anniversary Tour on the following dates:

This entry was posted on Thursday, November 14th, 2019 at 10:48 am and is filed under Attractions. You can follow any responses to this entry through the RSS 2.0 feed. Both comments and pings are currently closed.