Dinosaurs in the Wild is London latest pop-up attraction

If you’ve ever wondered what life was like 67 million years ago, new London attraction Dinosaurs in the Wild takes you there in person so you can find out for yourself. Personally I always wanted to board a time machine like Marty and Doc in Return to the Future so I really loved this experience. The popularity of time machines and dinosaurs have driven the creators of the Dinosaurs in the Wild to bring their new attraction to Greenwich Peninsula. London Mums and kids were lucky enough to be invited to the London preview along with some VIP guests including nonetheless than Elizabeth Hurley and her son. 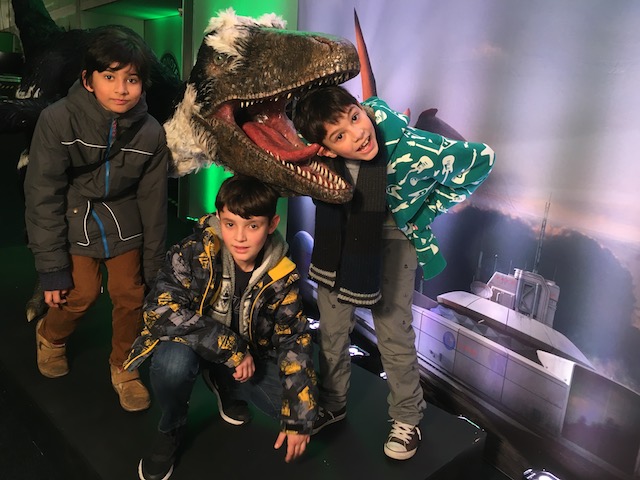 Dinosaurs in the Wild can only be described as a unique and exhilarating blend of live-action theatre, theme park fun and the very latest palaeontological knowledge in a pretend time machine experience Marty and Doc would certainly sign up to. 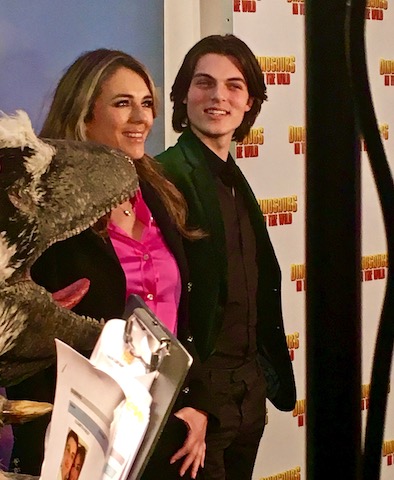 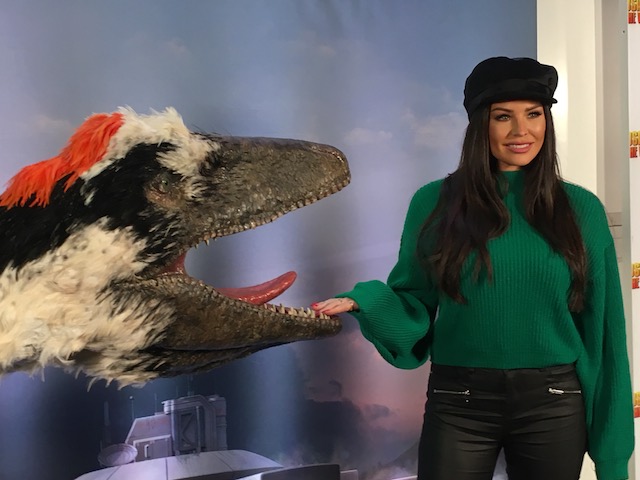 When you arrive at the pop up venue in Greenwich Peninsula you will be asked to board a very well made time machine that in a couple of seconds transports you back an astonishing 67 million years to encounter living dinosaurs as they’ve never been seen before. Cutting-edge audiovisual effects and dramatic storytelling are responsible for this  unforgettable and sometimes positively terrifying experience. When I was a school girl in the Seventies I loved dinosaurs. While I was inside the time machine I thought how brilliant this would have been if I entered that then and had the chance to see Tyrannosaurus, Alamosaurus and Triceratops with my own eyes. The thrill of encountering dinosaurs during this experience is quite unlike anything I’ve ever seen before. 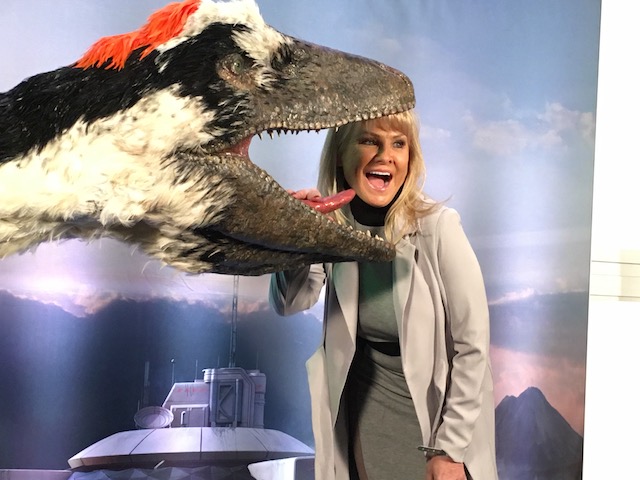 Once arrived at scientific research station, TimeBase 67, which Chronotex Enterprises has built 67 million years back in time, where scientists are studying dinosaurs in the past. Visitors from the future can check out prehistoric animals in cages, watch babies hatching, and witness an autopsy on a giant dinosaur. Kids (and parents alike) can learn amazing hands-on facts about dinosaurs including  putting their hands into piles of poo to find out more about their diet. 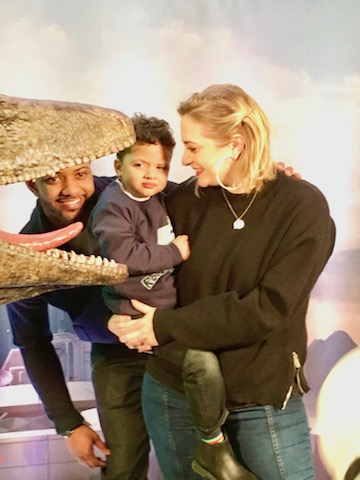 I loved especially watching all the prehistoric life all around us – we were standing behind the protective glass of the lab – and witnessing Tyrannosaurus and Triceratops roaming free in their natural environment. It felt pretty real particularly when the fierce animals were hunting and were hunted. Some children under 5 got a bit scared when there was a simulated attack by a T-Rex. But it was fascinating for most parts for them despite those few scary moments. That aside it’s very good. We attended the special preview with three kids aged 11 and 9 who absolutely loved it. The staff were in character either as security guards or scientists during the whole time and were very believable.

Here are some highlights of the things you’ll experience on this journey.

A Trip in Chronotex’s Time Machine to TimeBase 67 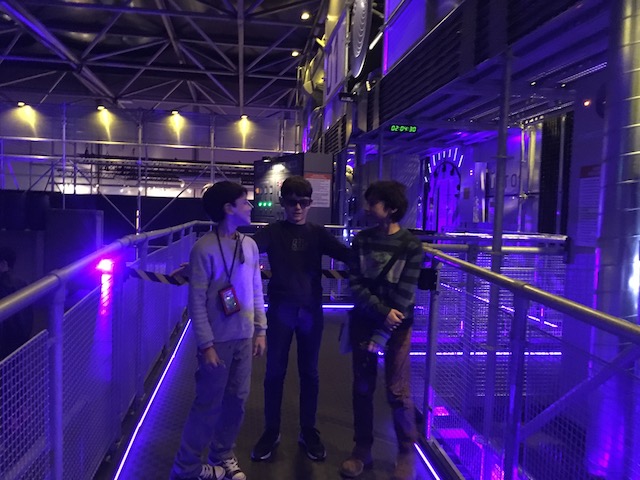 Firstly you enter the departure lounge, where you are greeted by staff from Chronotex, the pioneering company that discovered time travel and built TimeBase 67 to study dinosaurs while they were still alive.

It’s all pretend game but so believable that at some point during the ‘journey’ I was even a bit scared. Then you are asked to board the motion sickness-proof X90 Transfer Pods, put on your UV 3D glasses, watch a safety briefing on the potential dangers of prehistoric travel (I loved the line ‘our visitor survival rate is almost perfect’), and then board the time machine to travel back 67 million years in the blink of an eye, to the Late Cretaceous Period.

Exploring the dinosaurs from inside the Time Machine

Once the time machine has docked, it converts to a rugged land vehicle that securely transports visitors from the future across the hazardous Cretaceous plains, where you get to see some of the animals including Triceratops or Alamosaurus. I love the fact that the visit is organised so that it makes you believe that there might be unexpected problems and dangers. It is obviously more thrilling and realistic because prehistoric life is unpredictable. At the end of the experience, for example, we did encounter unscheduled Tyrannosaurus attacks on our journey and we had to board the time machine very quickly. 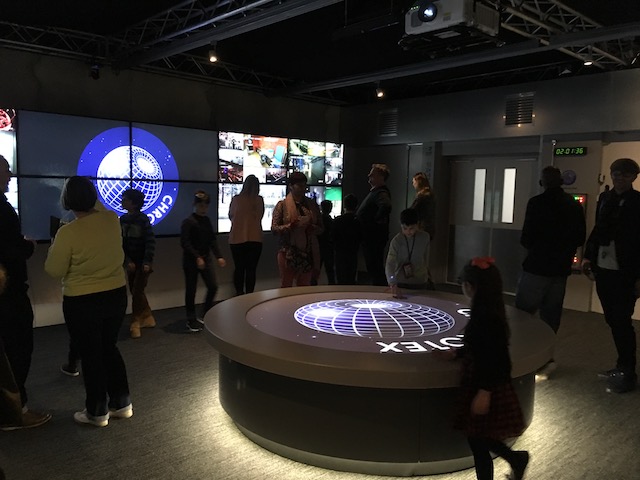 The Research Lab at Timebase 67 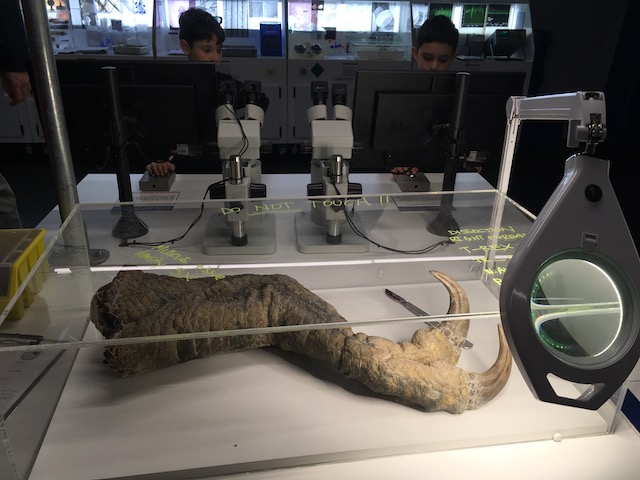 Upon arrival at the TimeBase 67, our expert guides took us through to the cutting-edge research laboratories, where scientists were studying living dinosaurs. 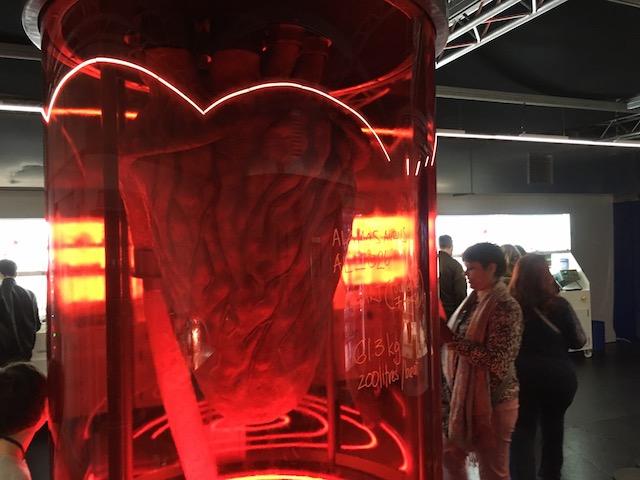 In the Path Lab, we learnt fascinating dinosaur facts and got up close to a huge Alamosaurus heart, interacted with some eyeballs, teeth and claws, and even discover what’s in dinosaur poo – ‘hands-on’ (literally). 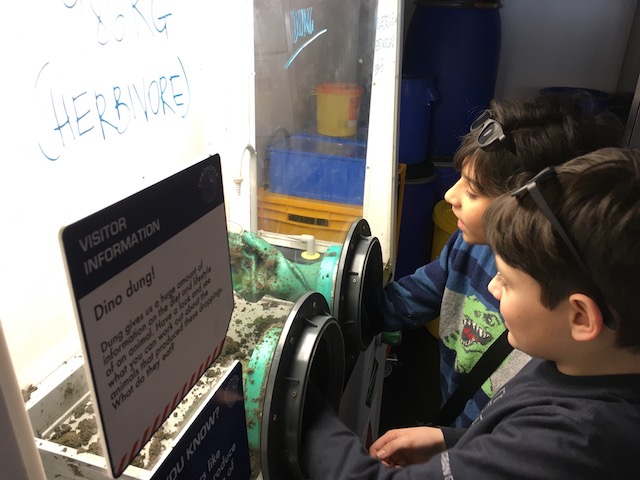 Then we moved on to the Autopsy Lab, where we witnessed a Pachycephalosaurus being dissected and saw the internal parts of this massive creature. 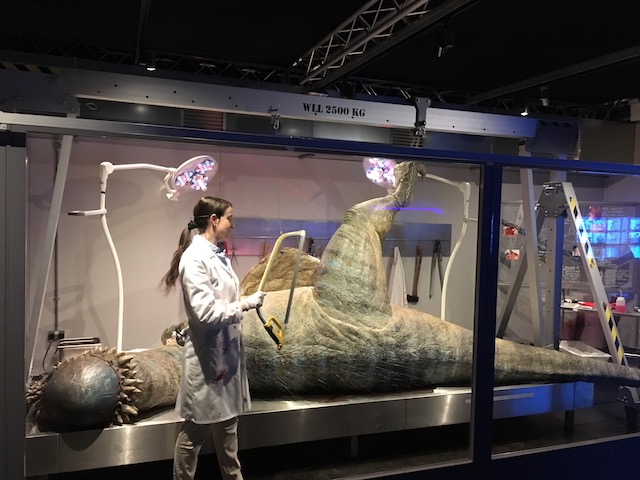 The Hatchery
The three incubators in The Hatchery held different species of dinosaur eggs, all ethically sourced from outside TimeBase 67 – here we learnt about the variety of egg shapes, growth stages and the laying patterns of dinosaurs. 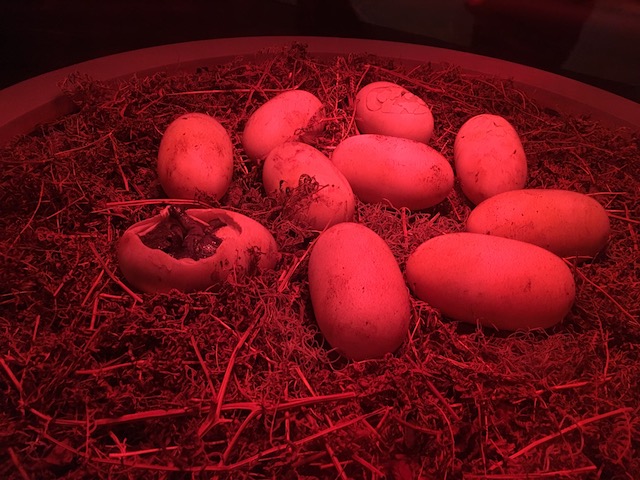 As we moved around the room, we saw a sweet baby Triceratop squirming inside his shell, eggs communicating with each other and cute fuzzy Dakotaraptor hatchlings. 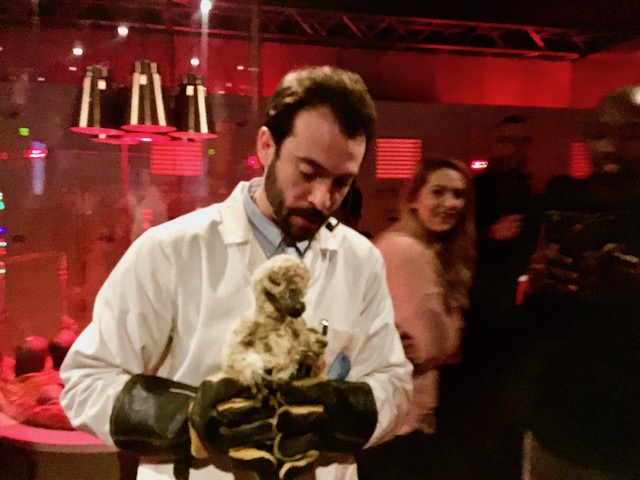 The Animal Lab is divided into nocturnal and daytime areas, and in it you’ll see juveniles from species such as Leptoceratops, Acheroraptor or Ankylosaurus that were hatched at the TimeBase and that our scientists are now studying. 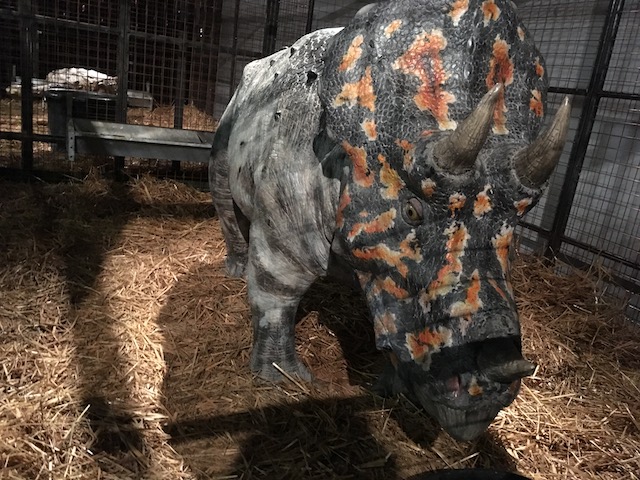 They’re all safely caged, but, as with anything to do with dinosaur tourism, please do be alert at all times in here and keep your fingers away from the bars, as some of these animals are extremely aggressive – and almost always hungry!

The last part of the ‘journey’ included a visit to the Lookout,  is a big space with panoramic windows offering breath-taking views of the prehistoric life roaming and hunting on the Cretaceous plains outside. 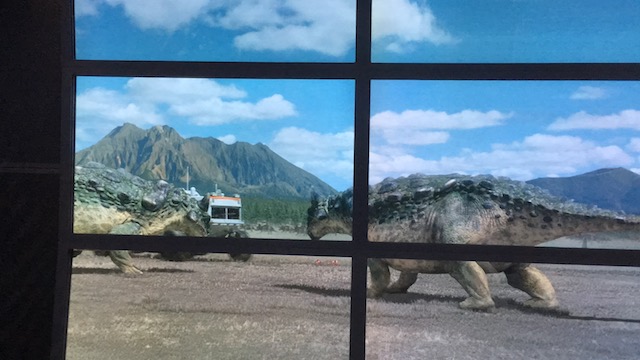 While we were watching the spectacle, the ‘pretend’ scientists said that they were currently recording higher than normal instances of animal activity, particularly agitated T-rex. Before we knew the T-Rex was banging his head on the protective glasses with the risk of breaking. 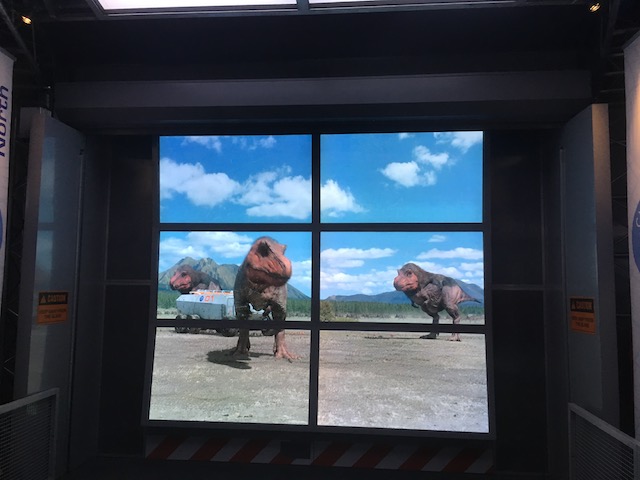 At this point, we were rushed back to the time machine and transported back safely to the present day, or so …. it was actually 2019! Giggle giggle…

Suggested Duration: 1-2 hours
Location: Greenwich Peninsula, SE10 0BE – It is at least 10 minute walk from the O2 (North Greenwich tube station) and parking is not great.

This entry was posted on Friday, February 16th, 2018 at 11:04 am and is filed under Attractions. You can follow any responses to this entry through the RSS 2.0 feed. Both comments and pings are currently closed.