I have caught up with one of the Wookie starring in Star Wars and his own Reel Music party happening on 28 May 2022. Reel Music is the decade old brain child of childhood friends Paul Davis and Freddie Smith, taking their love for movies into their professional realm of club DJing, in an attempt to celebrate their love for cinema with a giant movie themed costume party. Kicking things off way back in May of 2010 at Bloomsbury Lanes, the events would go on to spawn eleven sequel events over the course of three-years, a Tiger Beer sponsored tour of Universities in the winter of 2012, and more recently a whole host of live streamed shows on Twitch during the COVID-19 pandemic. 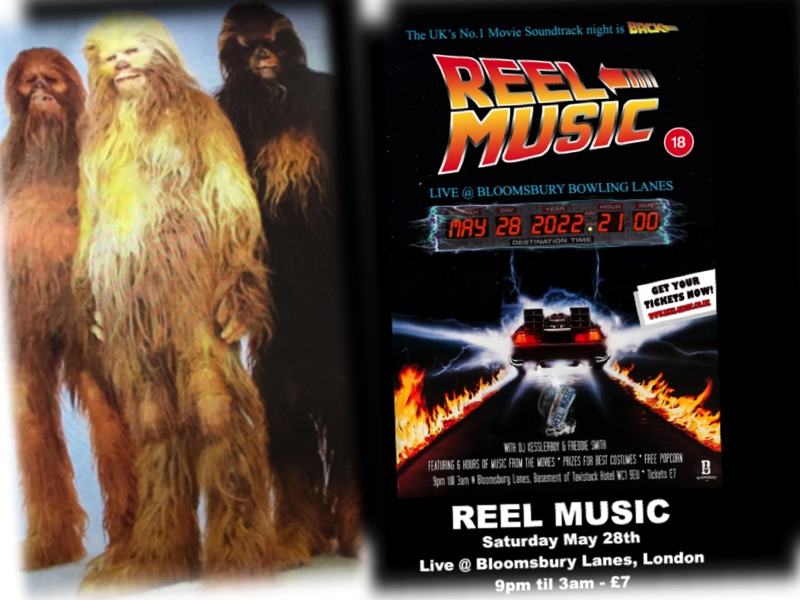 As of 2022, both of the original DJs career paths have shifted, with Freddie now a staple of the Kiss FM broadcasting family, and Paul writing and directing feature films in Los Angeles, but the one thing that has remained a constant is their desire to return to Bloomsbury Lanes and bring Reel Music back as a live,  epic costume party. On 28 May 2022 they will be doing just that. Returning to their spiritual home at the Lanes, and delivering what is hoping to be the biggest Reel Music ever conceived thus far.

Reel Music is a celebration of the movies. It is an excuse to dress up as your favourite movie characters with like minded cinephiles, and dance away the worries of the world with cinemas most synonmous soundtracks!

Q: Paul, your CV is very interesting. So, what’s the Reel Music Festival?
Paul Davies (Paul): Not so much a festival, just a huge movie themed costume party in the heart of London.
We only play songs from movie soundtracks and each one has a custom music video which is played on a big screen on the stage – so you always know what movie the song is from.
We started it at Bloomsbury Lanes in 2010 (with my business partner Freddie Smith from KISS FM), and ran three a year till October 2013.
We took a break to concentrate on our careers and then I brought it back as a live stream during the pandemic.
Off the back of the popularity of those we’ve decided to go back to Blommsbury Lanes and “reboot” the night as the ultimate movie costume party.
Q: I am soooo excited already! I have tons of costumes I could wear for that. When is the next one?
Paul: We reboot at the Lanes on 28th May.
And if the night is a success we’ve already got two more dates pencilled in for this year – including Halloween.
Q: I take it you will have Saturday night fever and the classic Travolta disco moves too …
Paul: Of course, I have a library of over 1,000 music videos from movie soundtracks – most of which I edited myself.
Q: How does this event tie up with your career?
Paul: I was a DJ for 20-years, but am now a full time filmmaker (writer/director). But have done some creature suit acting on the side due to my height.
Movies are my everything.
So still being a DJ back in 2010, it was an opportunity to merge two passions.
As of right now, I want to bring it back just to celebrate film and throw a party for those who love it as much as I do.
I think we all need it after the past couple of years.
Q: How tall are you?
Paul: 6ft 8. Wookiee size  (Laughs).
Q: How was your Wookiee role? Any cool anecdotes of being in a Star Wars movie?
Paul: It was a dream. I was on the SOLO movie for over a year, doing a lot of Wookiee camera/light tests for them long before we started shooting. Also worked with both sets of directors before Phil Lord & Chris Miller were replaced by Ron Howard.
Seeing Millennium Falcon was mind blowing. And we spent three days filming a battle scene in the Spice Mines of Kessel that was sadly cut.
Q: Awww the Millennium falcon!! How big is it? Realistic? Where is it kept when not used for shooting?
Paul: Huge! It was on an exterior lot at Pinewood. That entire exterior of the Spice Mines in SOLO was a fully constructed set with over 300 extras. Very little green screen.
In fact I think I only did one shot with green screen.
Everything else was there on set.
Q: This is sooooo interesting!! Was it outdoor? If so, where?
Paul: It was all at Pinewood Studios. Indoor and outdoor.
Q: Did you have to learn how to speak as a Wookiee?
Paul: We did roar because… honestly you can’t help it. But what was hilarious was hearing the guy who played Chewie say lines in English for Han Solo to play off.
Q:  Were these lines then taken off the final audio and replaced with roars?
Paul: Yeah, but whenever I watch that particular scene we were in, I know exactly what Chewie’s saying now  (Laughs).
Everything you need to know about me is on my website: www.kesslerboy.com

I will DJing throughout the night alongside my partner in crime, Kiss FM’s FREDDIE SMITH, as we play nothing but 6 HOURS of the best movie soundtracks all night!

The idea is to get as many cinema lovers dressed as their favourite movie characters under one roof for an epic celebration of all things film!

REEL MUSIC ran successfully as a club night for twelve events between 2010-2013 before movie to a live stream event during the COVID19 pandemic. With the following we garnered during the streams, we now feel that the time is right to bring the night back into the wild and celebrate with everyone in person.

Tickets are ON SALE now via our website. They’re only £7 and will gurantee you entry into the event.

Come and join the celebration on 28 May and please spread the word. If the night is as successful as previous we’ve held, then we will be doing more throughout the year!

For any information regard the venue and their policies, please visit the Bloomsbury Bowling Lanes website.

Monica: When we’ll meet up you’ll probably have to look down to find me (giggle)
Paul: I’m used to that (Laughs)

This entry was posted on Sunday, April 10th, 2022 at 2:35 pm and is filed under Attractions. You can follow any responses to this entry through the RSS 2.0 feed. Both comments and pings are currently closed.