After 20 years living in London, I finally managed to visit Buckingham Palace as part of a press preview aimed at attracting more families to interactively explore the residence of Her Majesty the Queen. I have to admit that I did not expect it to be as glamorous and majestic as it is. My 11 year old son Diego loved listening to the family tailored app and participating in all activities available throughout the visit and told me that he would rate this visit 9/10 which is a very high score for a child who has seen most Royal Palaces and done lots of London attractions. He truly enjoyed himself and was able to tell me many facts about the royal residence at the end of it. 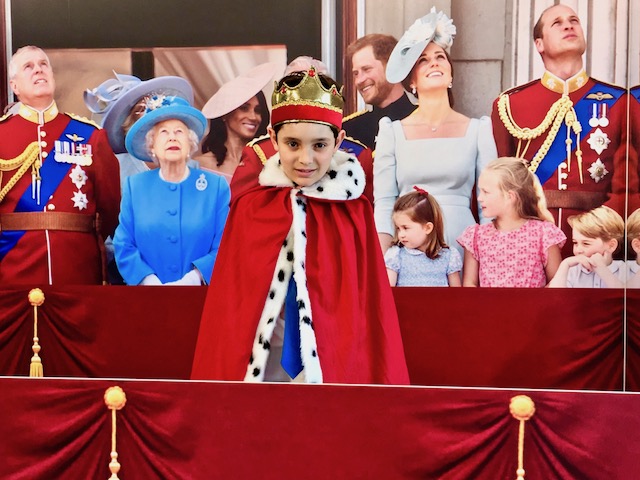 This is what I call a highly successful educational visit outside of school hours.

Buckingham Palace is recognised around the world as the most iconic London location for being the backdrop to the Changing the Guard ceremony as well as royal weddings and special events. Being a working Palace it only has limited availability for visits when the Queen goes on holiday to Balmoral.

We visited the State Rooms which are only open to visitors for 10 weeks every summer and on selected dates during winter and spring.

The State Rooms are the public rooms in the Palace where The Queen and members of the Royal Family receive and entertain guests on State, ceremonial and official occasions. 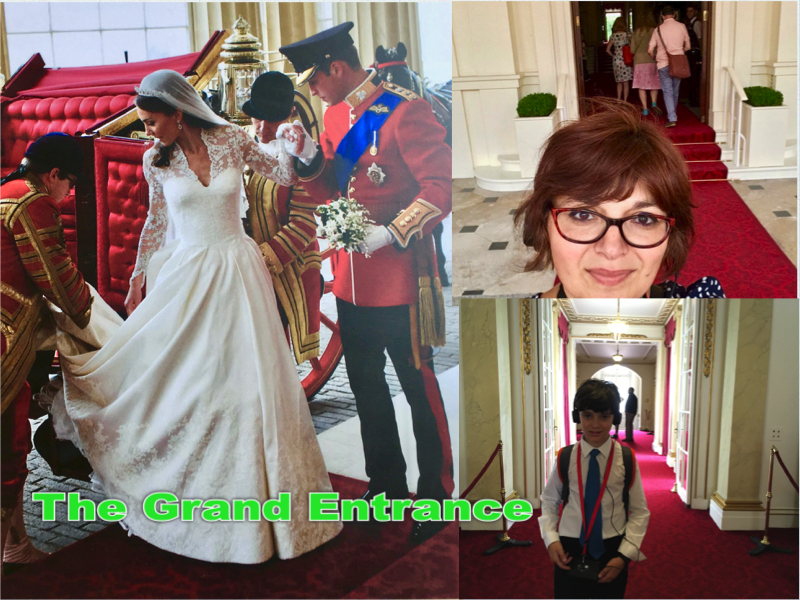 There are 19 State Rooms, which mainly reflect the taste of George IV, who commissioned the architect John Nash to transform Buckingham House into a grand palace in 1825. The State Rooms are furnished with many of the treasures from the Royal Collection, including paintings by Van Dyck and Canaletto, sculpture by Canova, Sèvres porcelain, and some of the finest English and French furniture in the world.

Many of the State Rooms have particular uses today. The Throne Room is used by The Queen for court ceremonies and official entertaining, and was the setting for the wedding photos of The Duke and Duchess of Cambridge. These rooms look quite familiar because we have all seen them in official royal photos and videos but they are a lot more impressive when you walk down those famous corridors. I did not expect such glamour and grandeur. The White Drawing Room, perhaps the grandest of all the State Rooms, serves as a royal reception room for The Queen and members of the Royal Family to gather before official occasions. On the newly updated website you can view all rooms via a 360 degrees camera. It feels like being there. One of the most impressive rooms is the The Ballroom. It is the largest of the State Rooms and it was completed in 1855, during the reign of Queen Victoria. It has a huge organ which is played during official ceremonies such as investitures and State Banquets. The Ballroom set for a banquet ©

At the end of the visit during the summer in daylight, you reach the Palace Garden which has a lovely Garden Café overlooking the Palace lawns and a family pavilion filled with activities for kids of all ages. The royal ice cream was delicious although a bit pricey (at over £5 for a small pot). 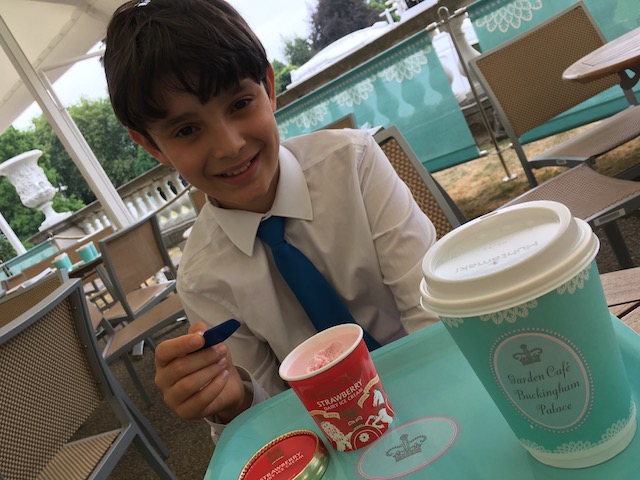 For a more in-depth view of the garden make sure you also book a Garden Highlights Tour with your Palace ticket.

Features among the 16-hectare garden include the 150 metre herbaceous border, a summer house, rose garden, the enormous Waterloo Vase and the Palace tennis court, where King George VI and Fred Perry played in the 1930s. 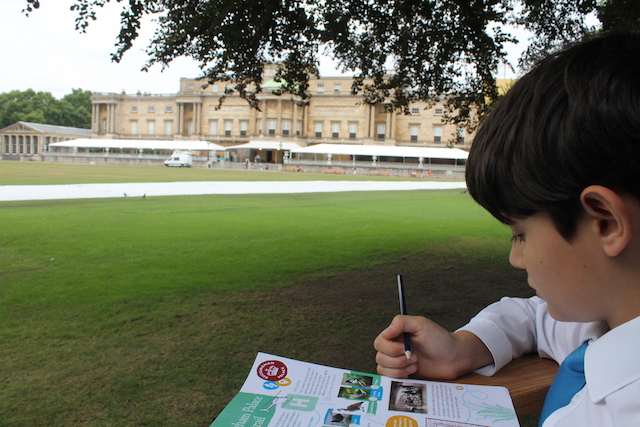 Diego was handed out a very detailed activity sheet to do during the garden tour that kept him busy for a long time. He praised the kids’ activities for a long time after we left.

The garden is best-known as the setting for The Queen’s garden parties, usually held in July. 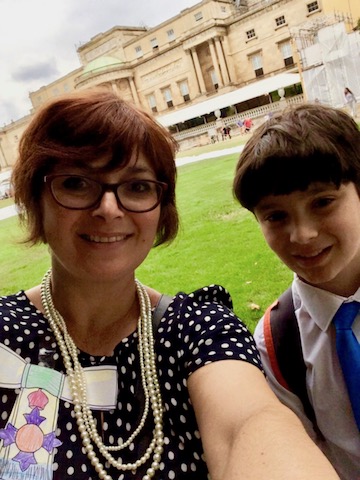 Activities in the Family Pavilion ©

At the end of the official itinerary, we entered the Family Pavilion situated by the West Terrace and overlooking the beautiful Buckingham Palace Garden which has lots of educational yet entertaining activities and games for all ages. Posing at the Family Pavilion ©

This year three of The Prince of Wales’s charities have created fantastic games that explore the work of the charity. Children can experiment with colour with the Royal Drawing School. Interestingly enough Diego met the young and talented artist who created one of the activities and interacted with him. 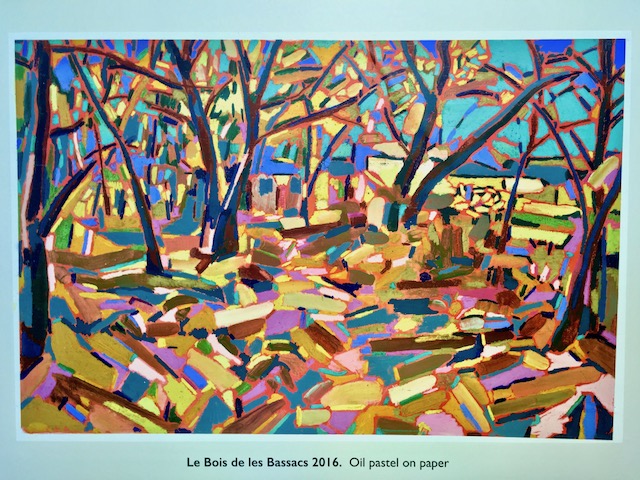 You can see him here with Christabel Forbes who created the drawing outside and then worked in the studio where she layered up colours to create an imaginary landscape. 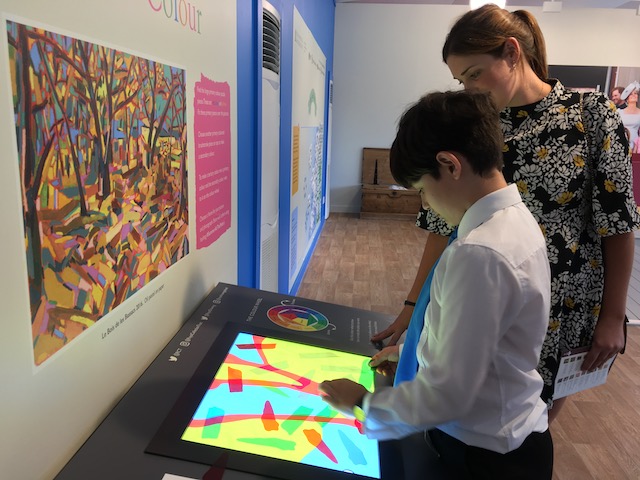 Children are encouraged to re-create parts of the painting using mosaic-like pieces. 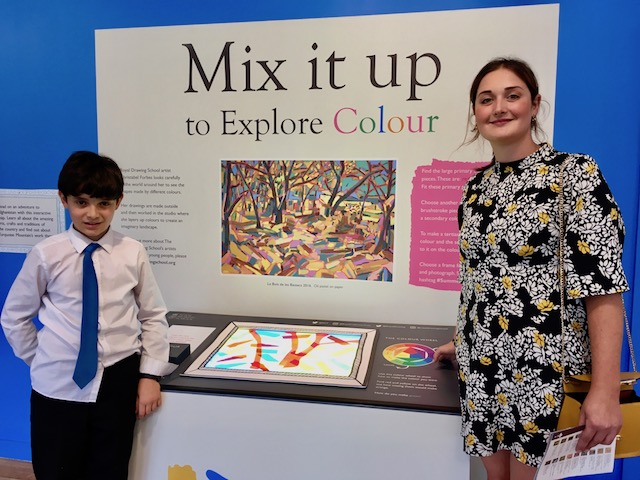 There are also all sorts of fun games which explore the working life of Buckingham Palace.

There is an area designed for the youngest visitors, with games and toys for under 5s, as well as a wide array of costumes to try. Children can become kings, queens, princesses and guards and pose on a special version of the famous balcony at Buckingham Palace.

For those who fancy a quiet moment after all the excitement of the State Rooms, there is a special area full of books, as well as colouring sheets and listening stations which tell stories about State Investitures.

The Family Pavilion is open daily throughout the Buckingham Palace Summer Opening, from Saturday, 21 July to Sunday, 30 September. 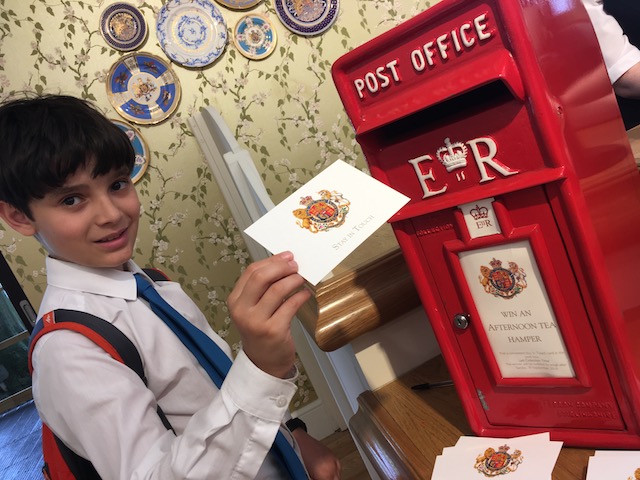 To mark his 70th birthday, Prince Charles has selected more than 100 objects and works of art for Buckingham Palace opening available to view from today. Prince and Patron is part of a visit to the summer opening of the State Rooms at Buckingham Palace 21 July-30 September 2o18. It is an interesting mix of artefacts and paintings that Diego was keen to explore using the interactive pod. They include contemporary works by artists supported by Charles’s charities as well as his personal top 25 of historical works from the royal collection.

Art, travel and history are huge interests of Prince Charles who has selected  objects such as the cloak worn by Napoleon Bonaparte during his campaigns in Egypt in the late 1790s and seized after the Battle of Waterloo in 1815. It is stunning and is made of wool, silk and silver thread. The colour, pattern and story of the cloak have fascinated Prince Charles since first seeing the object on display at Windsor Castle. 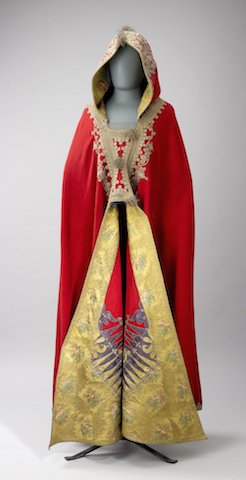 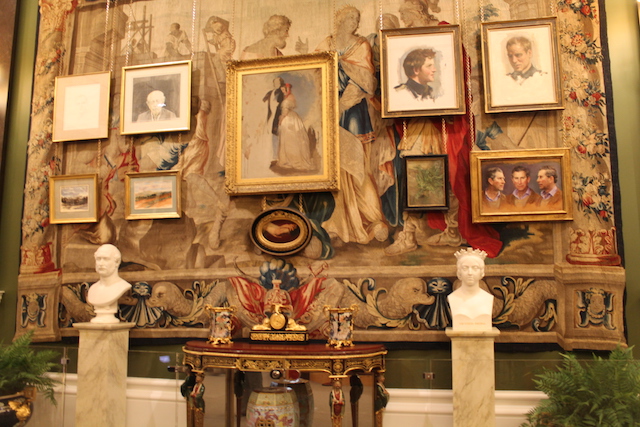 Lots of sketches and busts of the royal family on display 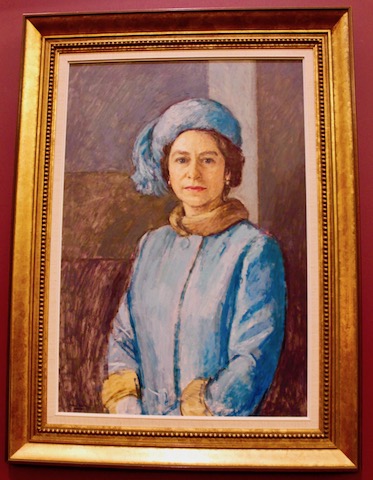 I loved this painting of Queen Elisabeth in particular. This encapsulates the spirit of a beautiful person, an inspiring woman and a leader.

To finish off this splendiferous day – as the BFG would have said after he visited the Queen at Buckingham Palace – we treated ourselves to a royal ice cream. 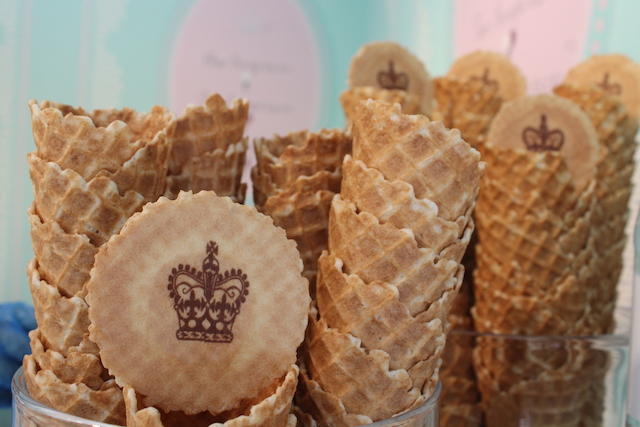 Attraction review: Why visit Hampton Court Palace with the kids

This entry was posted on Saturday, July 21st, 2018 at 10:17 am and is filed under Attractions. You can follow any responses to this entry through the RSS 2.0 feed. Both comments and pings are currently closed.