To celebrate London Mums’ 10th anniversary we are going to have a few special editorial issues covering mums’ music icons from the Eighties. After London Mums’ interviews with the Spandau Ballet, Paul Young and Midge Ure, we are now looking at the Summer programme at BST Hyde Park 2017 which has become synonymous with the London Summer as Wimbledon, featuring Phil Collins among the best acts. We look forward to the top music events on the big Oak Stage every year. Our reporters will be there and will cover the festival as every year. Meantime take a peak at the top events coming up at BST Hyde Park 2017 to avoid missing out on tickets and reservations early on as it looks like this year will be one of the best line up ever. 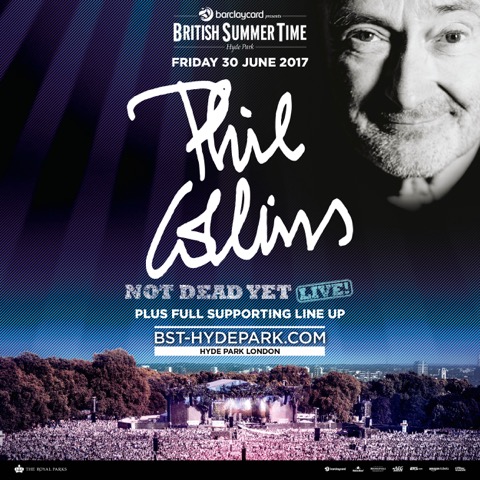 It’s a great news that Phil Collins is coming out of retirement for his first live shows in ten years, the mischievously named Not Dead Yet: Live tour. According to the man himself, “I will be playing all of the songs that people love.” An outpouring of excitement led to the five UK dates at the Royal Albert Hall selling out in a mere 15 seconds. Phil’s appearance at BST Hyde Park 2017, as his only UK festival show this year, will give fans one more night to celebrate the return of one of London’s favourite sons in one of London’s most iconic locations.

One the most successful artists of his generation, with more UK Top 40 singles than any other artist of the 1980s, Phil Collins came to prominence first as drummer and then as frontman of Genesis, making his solo debut with 1981’s album Face Value, containing smash hit single ‘In The Air Tonight.’

He followed this with an extraordinary run as a prolific hit maker. 3 UK Number ones – Easy Lover, You Can’t Hurry Love and Against All Odds (Take A Look At Me Now) – as well as 7 US Number 1s and global smashes including One More Night, Separate Lives, Two Hearts, Another Day In Paradise, I Wish It Would Rain Down, Both Sides Of The Story and Dance Into The Light to name but a few.

Six events will span Friday, Saturday and Sunday over two intense weekends filled with the world’s best music. For those who have not attended previous events, BST is not a traditional festival, but rather a series of six one-day events in Hyde Park, easy to reach for Londoners being just a tube ride home. 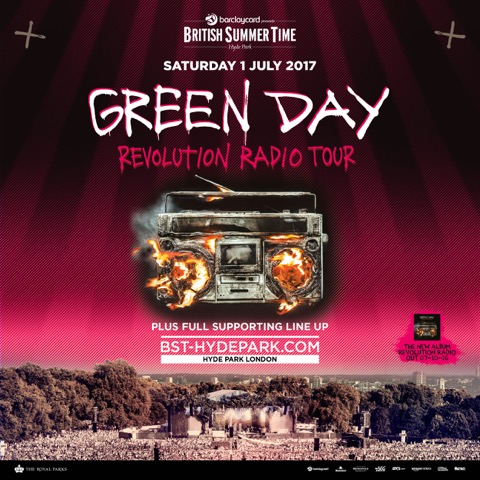 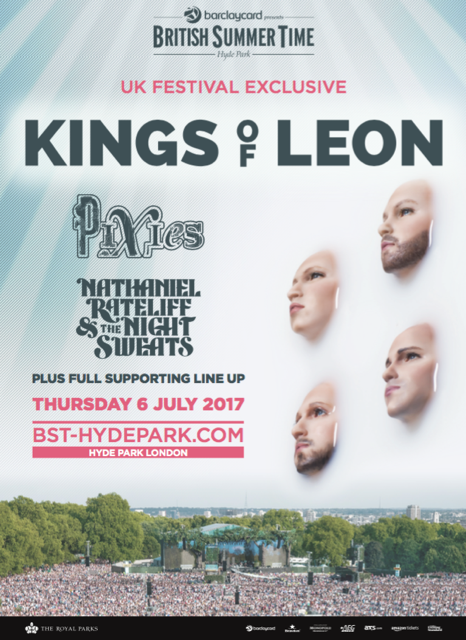 Kings Of Leon! The Grammy Award-winning band will headline on 6th July, showcasing tracks from their recent # 1 album ‘WALLS’ alongside their huge cannon of hits from right across their 7 albums. Since their debut in 2003, Kings Of Leon have sold over 18 million albums and 24 million singles worldwide. WALLS is their sixth consecutive album to have reached #1 in the UK and they have won four Grammy Awards, three NME Awards and two Brit Awards. Joining Kings Of Leon are fellow US rock legends Pixies. One of the most influential bands of all time they released their latest album Head Carrier earlier this year and to celebrate, they’re playing their biggest London show to date. Formed in 1986, Pixies have inspired a wealth of bands since including Nirvana, Radiohead and two past BST headliners The Strokes and Blur. Renowned for their incredible live shows, fronted by the mesmeric Black Francis, guitarist Joey Santiago, David Lowering and newest member Paz Lenchantin, this your chance to hear Debaser, Gigantic, Here Comes Your Man and Where Is My Mind? in all their glory.

Justin Bieber does not need an introduction especially to mums whose kids idolise him… He is a global sensation and multiple BRIT and GRAMMY Award winner. Justin Bieber’s debut Hyde Park show comes as part of his huge Purpose World Tour, which is running in support of his global #1 album – with over 10 million sold worldwide – PURPOSE.  The UK leg of the tour came to a close this year with two sellout shows at the London’s O2 Arena. But for all the Brit Beliebers out there, Justin will be returning to the UK with a full set of all the hits as well as his incredible full stadium production stage set next summer. Fans will be treated to a dynamic show with hit after hit, including ‘What Do You Mean?’, ‘Sorry’ and ‘Where Are Ü Now?’ as well as treasured pop classics ‘Boyfriend’ and ‘Baby’. It all began for the Canadian star in 2008; Bieber flew into the spotlight after his acoustic covers were accidently spotted on YouTube by manager Scooter Braun. At just thirteen years old, he was swiftly signed to Raymond-Braun Records and closely mentored by one of the R&B greats, Usher. Justin’s first mega-hit ‘Baby’ has now received over 1.4 billion views on YouTube. And since its release, Justin has made four UK top 10 albums. He’s sold an estimated 100 million records, making him one of the world’s best-selling music artists. News of his latest UK performances shows there are no signs slowing the unstoppable force that is Bieber.

Tom Petty and The Heartbreakers are armed with a career of classic hits and a reputation as one of the greatest musicians of the past 40 years. The gig will celebrate the band’s 40th anniversary. Their only European date of 2017, this will be just the second time Tom Petty and the Heartbreakers have come to the UK in 18 years. The band’s last visit in 2012 included a headlining appearance at the Isle Of Wight Festival and two rapturously received sold out shows at the Royal Albert Hall. Joining him will be Stevie Nicks, forever celebrated as singer and songwriter with Fleetwood Mac and perhaps one the greatest female artists of the rock era – feted by everyone from Courtney Love to Mary J Blige, Katy Perry and Taylor Swift to Beyoncé. Stevie and Tom Petty and The Heartbreakers go way back as great friends, tour mates and collaborators, so this will be a reunion to savour. Also on this incredible bill are American folk-rockers The Lumineers. Their self-titled album was critically praised and its infectious single “Ho Hey,” which had long been the centerpiece of the band’s live sets, ended up breaking into Top 10 markets internationally, eventually going double platinum. The Lumineers crossed the globe as they toured in support of their debut album, earning a pair of Grammy nominations along the way. In early 2016, they released their long-awaited follow-up album, Cleopatra, with a colossal world tour to match. And now the trio are hitting Hyde Park with one of their biggest UK shows to date!

Forming his first band whilst still a teenager, Tom Petty released his debut album with The Heartbreakers in 1976, only receiving recognition and eventual super-stardom in the US after making a mark touring the UK. They came across the pond in 1977 as a support band and left six weeks later as a headliner in their own right, having appeared on the covers of many of the music periodicals at the time including Melody Maker, NME and Sounds. The debut record contained the classics American Girl and Breakdown. Petty never looked back. 16 albums later, he boasts global hits such as Free Fallin’, Don’t Come Around Here No More, Refugee, You Got Lucky, You Don’t Know How It Feels, I Won’t Back Down, Listen To Her Heart, The Waiting, Don’t Do Me Like That, Runnin’ Down A Dream, Into The Great Wide Open, Mary Jane’s Last Dance and more. This list is a testament to Petty’s remarkable durability as a songwriter.
Now approaching its fifth year, Barclaycard presents British Summer Time Hyde Park has been host to some of the biggest and best live acts in the world:

– The event kicked off in 2013 with The Rolling Stones reliving their legendary 1969 gig
– The Libertines‘ surprise return prompted fan pandemonium in 2014
– 2015 saw Taylor Swift invite the world’s most wanted supermodels AKA her squad on stage half way through her set
– In 2016, BST Hyde Park has its first joint-headliners; Florence + The Machine and the critically acclaimed rapper Kendrick Lamar
– Last year, Stevie Wonder brought his Songs In The Key Of Life tour outside of the USA for the first time
– Carole King performed Tapestry in its entirety for the first time ever last year, and had her first London show in nearly 30 years.

This entry was posted on Tuesday, January 10th, 2017 at 2:48 pm and is filed under Attractions. You can follow any responses to this entry through the RSS 2.0 feed. Both comments and pings are currently closed.