This Summer in London we have enjoyed the best looking and most inspirational benches ever produced. For those who haven’t noticed some of the 51 colourful BookBenches installed in June on the streets of London here is a little story behind the Books about Town initiative and the images of the few I managed to capture.

Trails of benches shaped as open books, decorated by professional illustrators and local artists, were created for the public to enjoy. It has been a unique opportunity to explore the capital’s literary connections, to enjoy art from some of the country’s top artists and to celebrate reading for enjoyment. To view all the wonderful 51 BookBenches check the Books about Town website.

There is a last-minute opportunity to see all of the stunning BookBenches that have been dotted about London this summer – in one place! The public have one final chance to view the 51 benches which will all be gathered together in the University of London’s Gordon Square Garden WC1 for one weekend only – 4 and 5 October 2014 from 10am to 6pm.

This will be the last chance to see the iconic benches that took London by storm this summer and to preview them ahead of auction at the Southbank Centre on 7 October. The auction will raise vital funds to support the work of the National Literacy Trust to raise literacy levels of disadvantaged children. 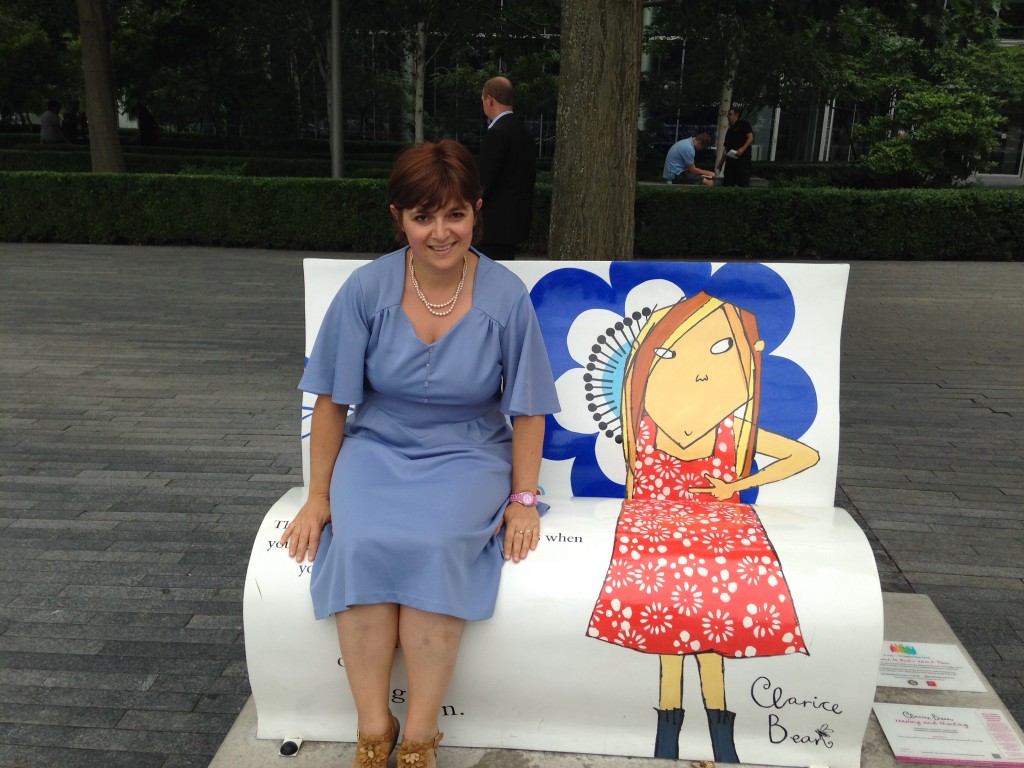 Unfortunately now the time has come for us to let go of the benches that will be auctioned at an exclusive event in the Southbank Centre to raise funds for the National Literacy Trust’s vital work to raise literacy levels in the UK.

Here are the ones I have come across and enjoyed photographing.

The Clarice Bean BookBench was designed by Charlie & Lola’s author and illustrator Lauren Child herself and brought to life by artist Jane Headford. 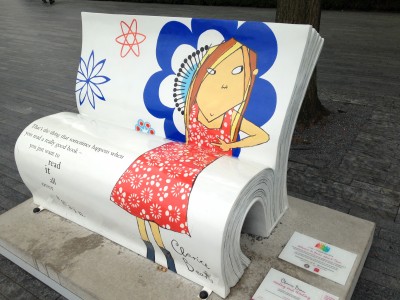 If you don’t know who Clarice is here is a bit of her story: All Clarice Bean wants is a bit of peace and quiet. But that can be hard to find in a house where your little brother is being utterly annoying, your big brother is in the dark tunnel of adolescence and your grandad is pouring soup on his cornflakes. Clarice introduces us to her life and family in the original book that launched the hugely successful, critically-acclaimed Clarice Bean series, written and illustrated by Lauren Child. 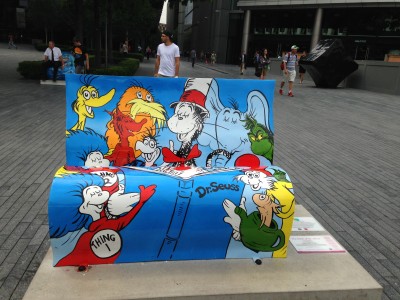 Theodor Seuss Geisel, best known as the beloved Dr Seuss, was an American writer and cartoonist. He wrote 46 children’s books, including The Cat in the Hat (1957). The Cat shows up at the house of Sally and her brother one rainy day when their mother is away. Left alone, they think they’re in for a dull day – until the Cat in the Hat steps in on the mat, bringing with him mayhem and madness! Geisel created the book in response to a debate in the United States about literacy in early childhood, so it is very fitting that it inspires a BookBench as part of this project that celebrates reading for pleasure and help us raise literacy levels in the UK. 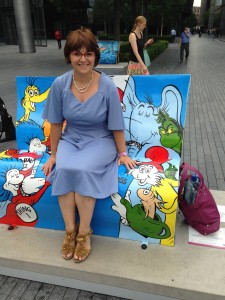 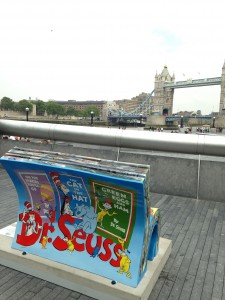 This is me on the Dr Seuss BookBench next to City Hall. I loved watching Tower Bridge and the Tower of London from there. One of the best spots and one of the best BookBenches in London.

Elmer the Patchwork Elephant has been a nursery favourite since the series was first published, with over five million copies sold in 40 languages worldwide. David McKee‘s beloved story of Elmer is about celebrating differences and diversity and accepting one’s true colours. Destined to be the most colourful bench on the Books about Town trail, Elmer’s bench is proudly sponsored by Andersen Press. 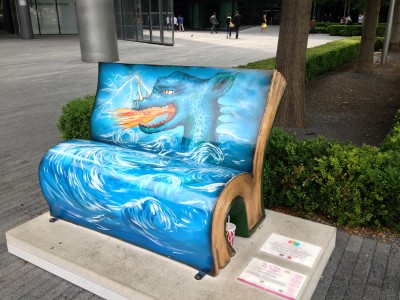 This BookBench was designed by the author, Cressida Cowell, who took inspiration from her childhood: “As a child I grew up in London and on a remote Scottish island where I was inspired to create my world of dragons and Vikings. Sit on this BookBench and imagine dragons wheeling above you in the skies.” 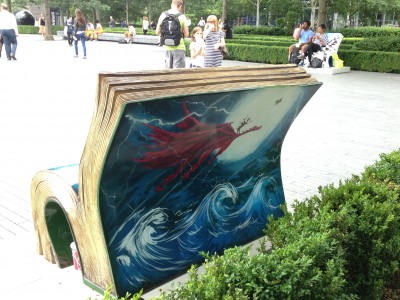 Read the books that inspired the How to Train Your Dragon films! Hiccup Horrendous Haddock III was an awesome sword-fighter, a dragon-whisperer and the greatest Viking Hero who ever lived. But it wasn’t always like that. In fact, in the beginning, Hiccup Horrendous Haddock III was the most put upon Viking you’d ever seen. Not loud enough to make himself heard at dinner with his father, Stoick the Vast; not hard enough to beat his chief rival, Snotlout, at Bashyball, the number one school sport and CERTAINLY not stupid enough to go into a cave full of dragons to find a pet… 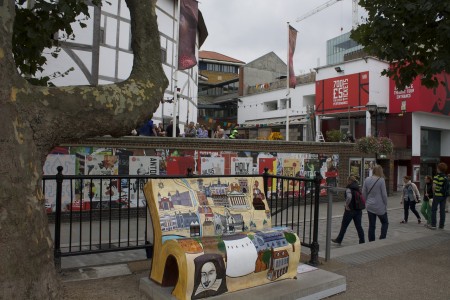 How could we celebrate London’s literary heritage without a Shakespeare’s London BookBench? No matter what your favourite play is, this bench will draw you into Shakespeare’s amazing world, from the magic of A Midsummer Night’s Dream and the mayhem of Love’s Labour’s Lost, to the heart-wrenching romance of Romeo and Juliet and the hilarious comedy of Much Ado About Nothing. So dig out your favourite Shakespeare quotes and celebrate our greatest playwright. 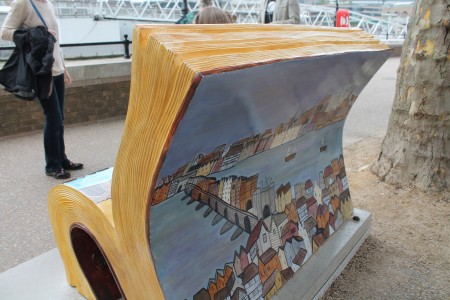 Shakespeare’s London BookBench photographed from behind

Artist Jeremy Banx has created a special BookBench to celebrate reading for pleasure. Bring your favourite book – you’ll have company! 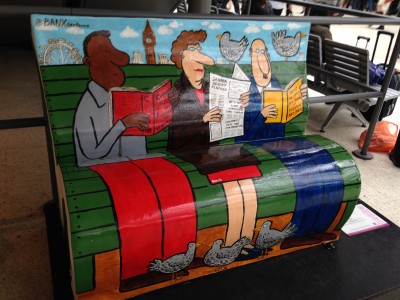 Jeremy Banks or “Banx” was born in London in 1959. He has been a professional freelance cartoonist since 1980, and since 1989 has been pocket cartoonist for the Financial Times. In 2008 and 2012 was voted Pocket Cartoonist of the Year by the Cartoon Art Trust. Banx’ work has appeared in many publications, including Punch, Private Eye and the London Evening Standard. His books include: Cubes, The Many Deaths of Norman Spittal (which he also transformed into a series of animations with Bob Godfrey Films and Red Kite), Big Fat Sleepy Cat, and The Dewsburys. 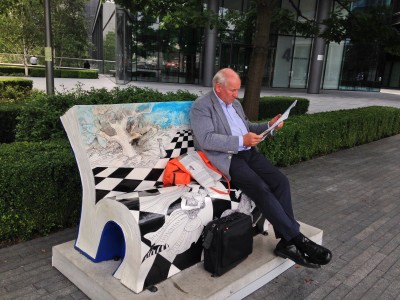 This BookBench is based on the sequel, Through the Looking Glass – This man did not want to move so he’s in the picture. These benches are really lovely so I don’t blame him.

Everyone knows the story of how Alice fell down a rabbit hole and discovered a strange world of wonder and adventure, where she encountered mad tea parties, cats that disappeared at will and the ill-tempered Queen of Hearts. The British classic written by Lewis Carroll nearly 150 years ago remains a favourite children’s story the world over. This summer you can discover Wonderland in a new way with a stunning BookBench based on the sequel, Through the Looking Glass.

The iconic Through the Looking Glass BookBench has been designed by British cartoonist Ralph Steadman. Steadman is perhaps best known for his work with American author Hunter S. Thompson and Fear and Loathing in Las Vegas. He is renowned for social and political caricatures, cartoons and picture books.
You can actually buy one of these benches for your own pleasure. From 15 September the BookBenches will be removed and sold at public auction on 7 October 2014 at an exclusive event at the Southbank Centre.
Proceeds will go to the National Literacy Trust, a charity dedicated to raising the literacy levels of disadvantaged children and young people across the UK.
Please share your own BookBenches pictures with us on our Facebook Page or Twitter @londonmums.

This entry was posted on Thursday, September 18th, 2014 at 11:00 am and is filed under Attractions. You can follow any responses to this entry through the RSS 2.0 feed. Both comments and pings are currently closed.