Attraction review: The Cartoon Museum exhibition ‘V for Vendetta: Behind the Mask’ 18 May – 31 October 2021

The Cartoon Museum in London’s Fitzrovia has just re-opened with the exhibition V for Vendetta: Behind the Mask examining the cultural impact of the cult comic from seminal graphic novel to hit film. The exhibition is open until 31 October 2021. 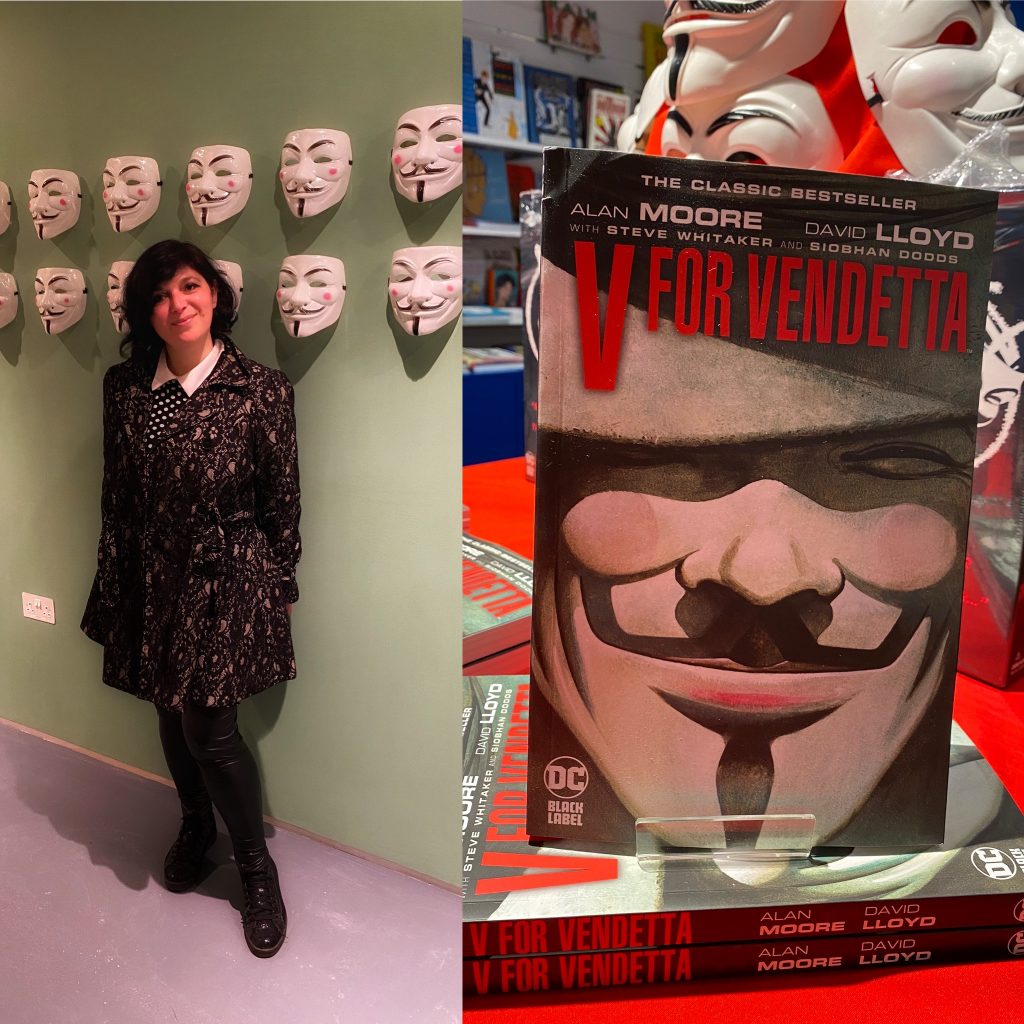 I enjoyed exploring props and original sketches of V for Vendetta, one of the most ground-breaking series of comics ever published. 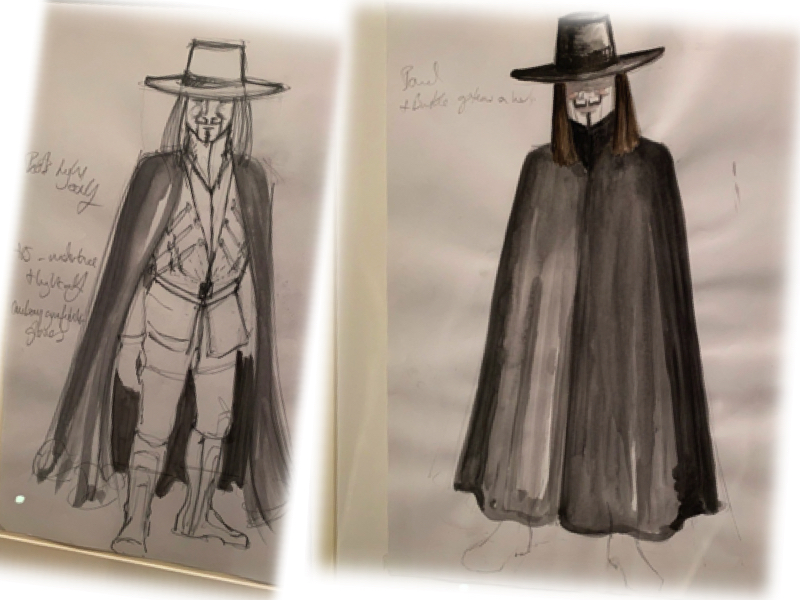 The exhibition takes you on a journey beginning with the original 1980s artwork of the masterful David Lloyd, to the early 21st century interpretations of Hollywood, and finally with the effect the comic still has on global culture today. V for Vendetta shows us a near-future world, that is borne out of fear and anger following a potential catastrophic event. That’s why it still speaks to us today and tries to make sense of the world we live in. 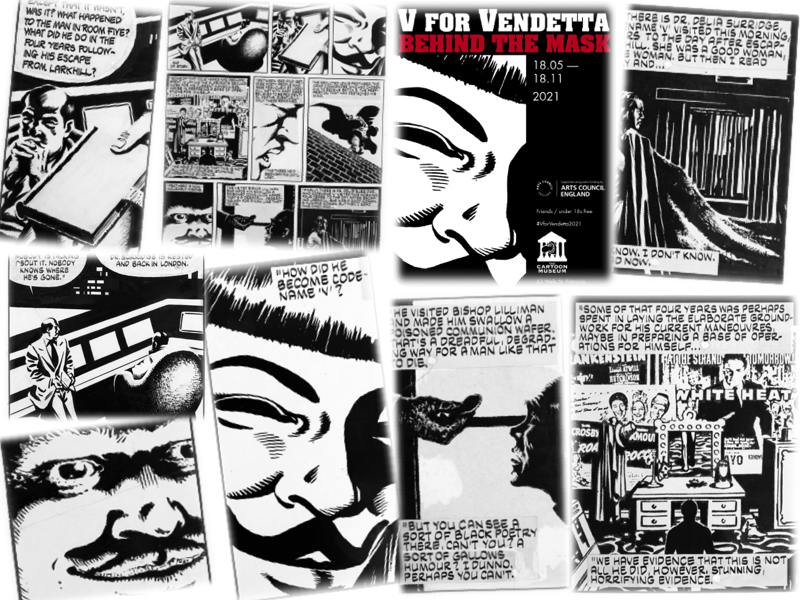 This show launches at a time when, perhaps inspired by the fears and anxieties of the time in the UK, audiences may see V for Vendetta in a new light, following a pandemic year that recharged debates over rights, Government control and citizenship. 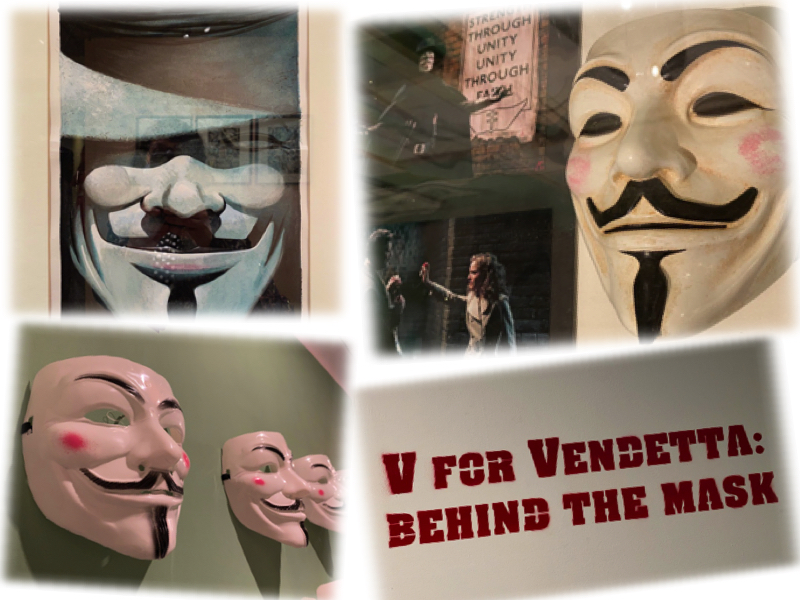 Behind the Mask charts the rise from graphic novel, to hit film and now global phenomenon as a symbol of protests. Visitors can get up close to the real mask that Hugo Weaving wore in his role as V in the 2005 film. The mask is one of only three that were made for the film and perhaps was the turning point which transformed the Guy Fawkes-inspired disguise from recognisable pop culture to global phenomenon, seen around the world in all manner of protests from across the political spectrum. 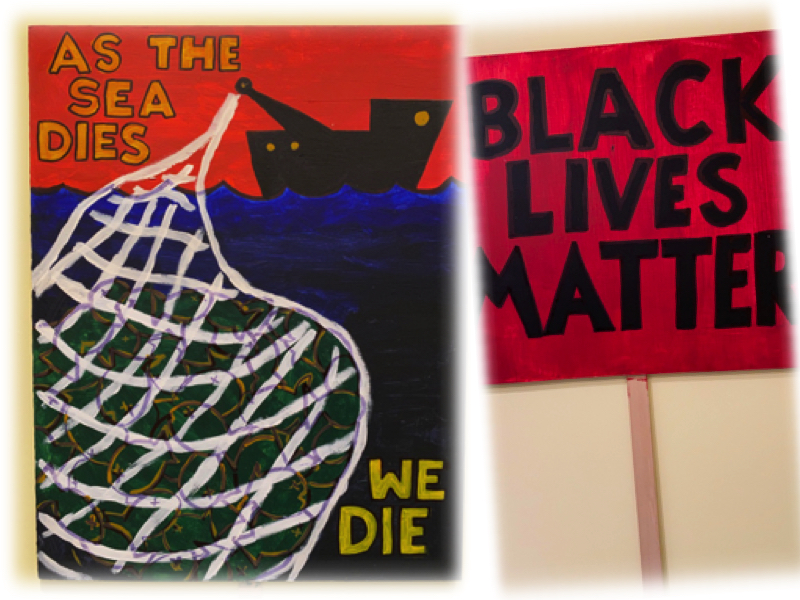 This show highlights rare loans from the art department of Warner Bros. and presents a history of this modern classic with original artwork and covers, as well as costumes and designs that have never been seen in the UK before. 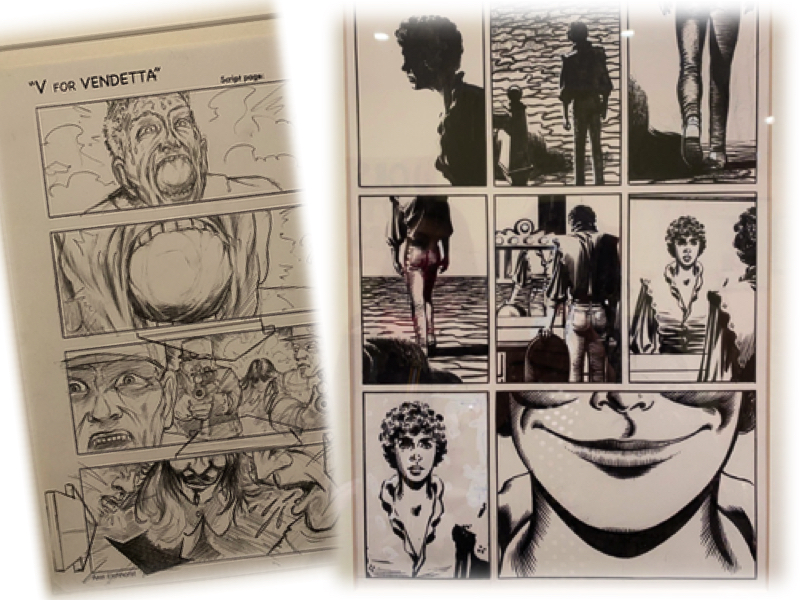 Illustrated by David Lloyd and written by Alan Moore, the central character of the masked and mysterious ‘V’ became an iconic symbol of comics, cinema and the hacker group, Anonymous. Its cultural impact, spanning nearly 40 years, is explored through 36 original artworks by David Lloyd, including black and white pages and colour paintings. These will be displayed alongside the original mask worn by Hugo Weaving in Warner Bros.’ blockbuster 2005 movie adaption, one of only three that were used during production, as well as costume designs and storyboards. 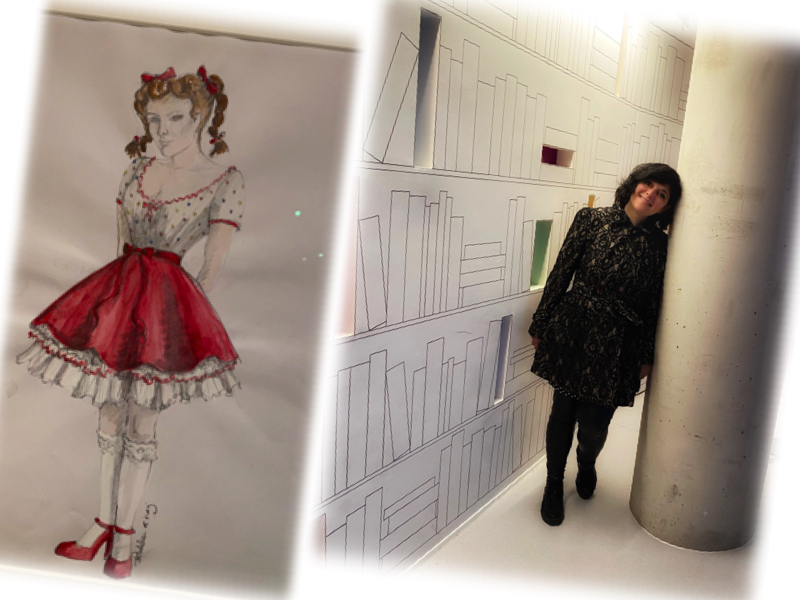 V for Vendetta first ran as a black-and-white strip between 1982 and 1985, in Warrior, a British anthology comic published by Quality Communications. It was one of the comic’s most popular strips, but Warrior was soon cancelled after only 26 issues due to low sales. Three years later, DC Comics – famously the publishers of Batman and Superman titles – persuaded Moore and Lloyd to let them give V a new home. 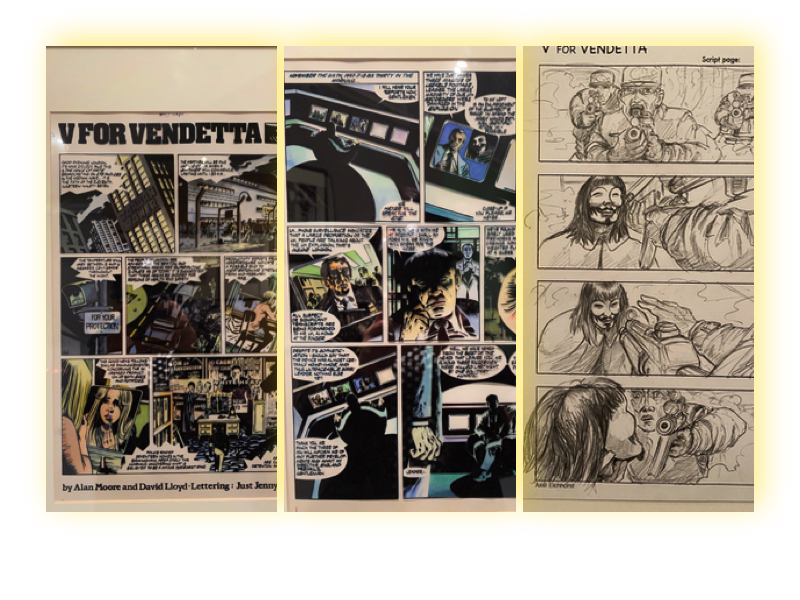 From then, Lloyd’s illustrations and Moore’s storylines – portraying a moody and bleak futuristic vision of Britain, suffering from an almost apocalyptic nuclear destruction and the ravages of a neo-fascist state – became one of the most celebrated graphic novels of all time. It is in this setting where V wages a seemingly solo war against the totalitarian government and is eventually aided by Evey, a young woman who is victimised by the regime and decides to take action.

V for Vendetta, adapted by the Wachowskis fresh from the completion of The Matrix trilogy, becoming a box office smash and leading a new generation to the comic. Original costume designs by Sammy Sheldon Differ, who subsequently worked on Marvel’s Ant-Man and the upcoming Eternals, will also be on display, showing how David Lloyd’s creations were interpreted for the screen. These will also be accompanied by the original storyboards for a scene in which V plans a daring raid on a TV station, designed by long-time Wachowski collaborator Axel Eichhorst.

The iconography and themes of V for Vendetta, and how they have spread from the page and screen into people’s lives, will also be a major focus of Behind the Mask. In the movie, the mantle of the mask passes from V to Evey but in the finale we see thousands of ‘ordinary people’ don their own masks. This prompts the exhibition to explore the idea of self-expression through protest – anyone can be V, so where does the line between anarchism and protest sit for the individual? The exhibition explores the voices of protesters in the real world, all under the looming presence of the 21st century’s most recognizable protest art – the mask of V.

Original pages of David Lloyd’s work have been sold at auction for over £20,000, while the graphic novel continues to top bestseller lists four decades after its original release. As well as the high-profile loans from Warner Bros., The Cartoon Museum will also display three original V for Vendetta covers from the initial run in Warrior magazine. 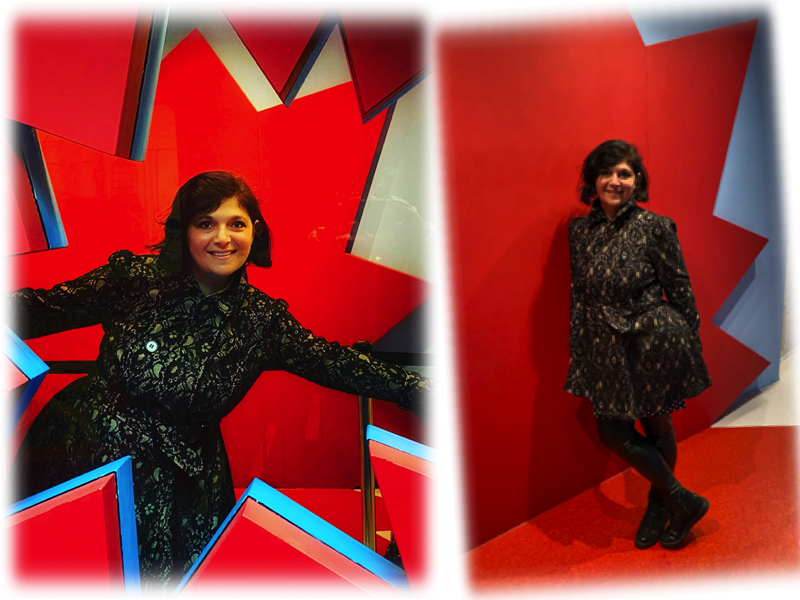 After visiting the exhibition, people can enjoy the permanent artwork featuring brilliant satirical illustrations at The Cartoon Museum whose mission is to celebrate and conserve the British comic tradition championing cartoon and comic art and highlighting its importance to culture and society. 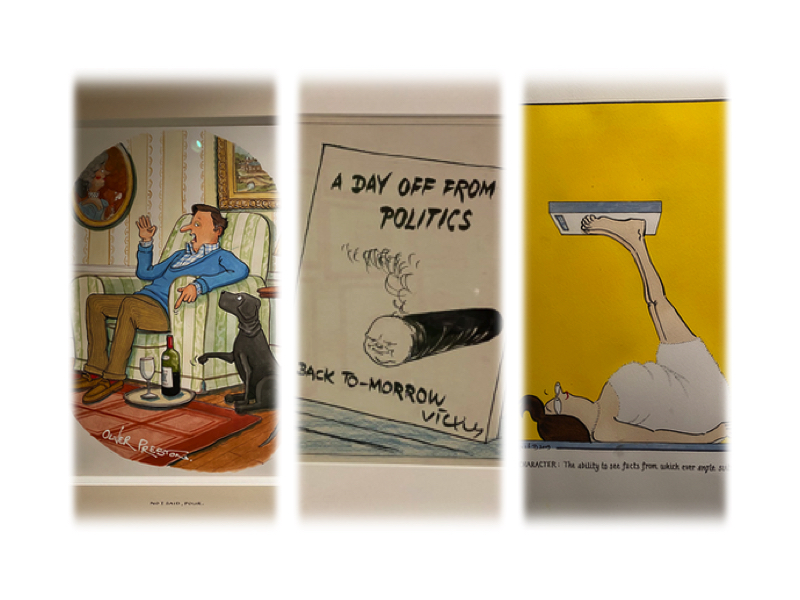 Tickets for V for Vendetta: Behind the Mask are available online from cartoonmuseum.org

The Cartoon Museum can be found at 63 Wells Street, Fitzrovia, London, W1A 3AE.

This entry was posted on Tuesday, May 18th, 2021 at 2:01 pm and is filed under Attractions. You can follow any responses to this entry through the RSS 2.0 feed. You can skip to the end and leave a response. Pinging is currently not allowed.