One of my favourite attractions in Great Britain is Portsmouth Historic Dockyard. From London it is only one hour drive away and makes it the perfect day out on the British coast for the whole family. It is one of those attractions that require at least a full day to be able to visit everything. But you can return again and again and always find new artifacts and new fun activities to do.

My 10 year old son Diego and his friend went on a little boat trip in the canal despite the rain. Portsmouth Historic Dockyard has plenty of outdoor and indoor spaces where you can hide either from the bad weather or the sunshine.

I was personally very keen in visiting the Mary Rose, Henry the VIII’s ship which was brought back from the sea, restored and showcased in a dedicated area of the dockyard. 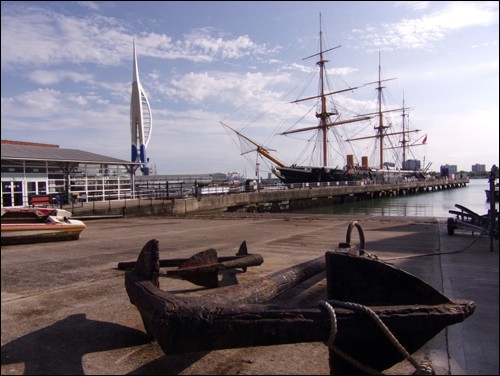 The award-winning £27 million Mary Rose Museum opened in 2013 and has since welcomed over one million visitors. 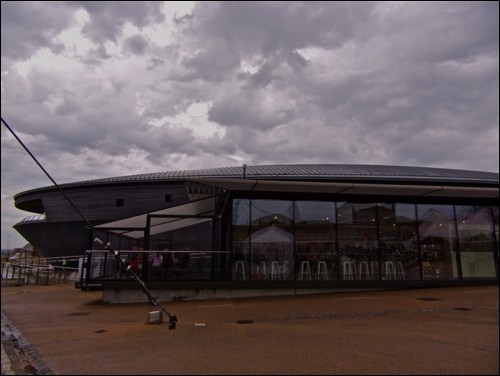 From 20 July 2016, 471 years since the sinking of the Mary Rose, and following 34 years of meticulous conservation, Henry VIII’s favourite ship was brought back to life. 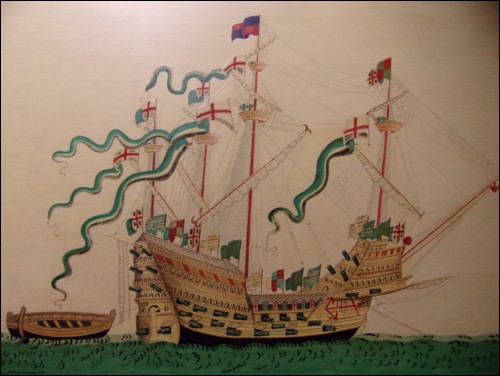 In this new section of the  Portsmouth Historic Dockyard children and the public can watch the Mary Rose turn into a living ship thanks to interactive projected videos of mariners on the wreckage of the ship. 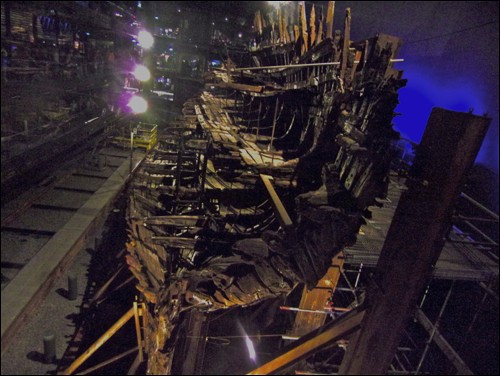 The museum is so packed with fascinating artifacts that it is not just a wonderful day out for all the family but you could visit many times and still find things you haven’t noticed the first time. I found it really fascinating and children loved seeing the crew in peace time and at war projected onto the hull. We saw stunning panoramic views of the ship from all nine galleries through floor to ceiling glazing on the lower and main deck. On the upper deck, we felt like breathing the same air as Henry VIII’s warship with only a balcony between us and the hull.

Located just metres from Nelson’s flagship HMS Victory, the First World War Gallipoli veteran HMS M.33 and the ships of the modern Royal Navy, the museum provides one of the most significant insights into Tudor life in the world. 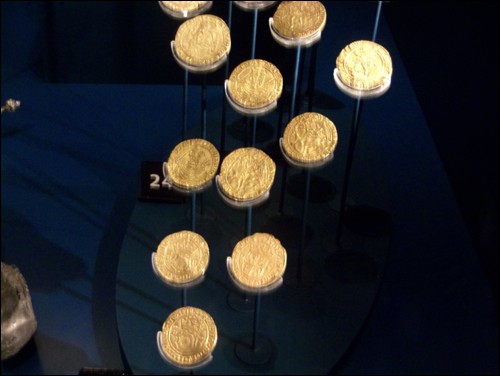 The history of the Mary Rose is fascinating. The children spent most of the time reading everything about how it was built in Portsmouth and then launched in 1511. She sank during an engagement with a French invasion fleet just two kilometres from the entrance to Portsmouth Harbour. The members of the crew would have lived, worked and fought in cramped and overcrowded conditions on board. The museum gave us an insight into the lives of her crew and what life onboard would have been like. 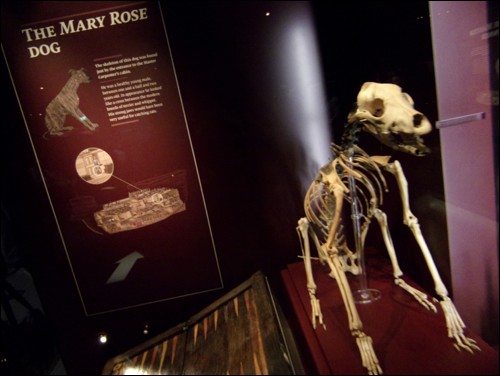 Soon after the Mary Rose sunk, divers tried to recover the ship and her guns, but to no avail. The world had to wait another 437 years to see the ship and the majority of her artifacts, which are now on display in our museum. Diego and his friend Johnny loved exploring what life Tudor sailors would have had on board a great ship like the Mary Rose. 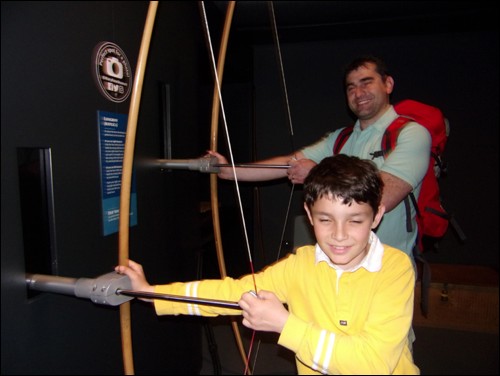 The Mary Rose dates from an extremely important time in English history, when the technology of guns, gunpowder and shipbuilding was changing.

Although the Mary Rose was fascinating due to her old age, my favourite ship was probably the HMS Victory, the oldest commissioned warship in the world and Nelson’s flagship, because it made me feel like being on the set of Master and Commander: The Far Side of the World. 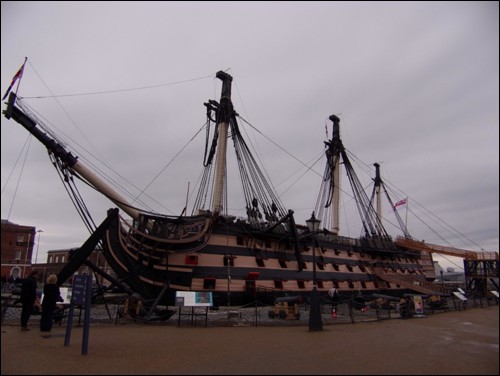 She’s a proud memorial to Vice Admiral Lord Horatio Nelson, Britain’s greatest naval hero and his victory at the Battle of Trafalgar in 1805. The Battle consisted of a British fleet of 27 ships against a combined fleet of 33 French and Spanish warships. During the fight Nelson was mortally wounded and is now remembered as one of Britain’s greatest war heroes. No English ships were destroyed in the battle but Nelson was amongst the 7,000 French and Spanish and 1,500 English Seamen who were killed or wounded. 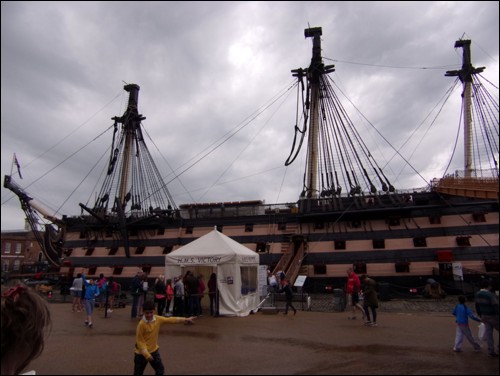 For the first time since 1928, the world’s most celebrated warship, HMS Victory has undergone her biggest change. A major reinterpretation of her visitor route through the ship enables visitors to follow in the footsteps of Nelson, its most famous Admiral, as the ship embarks on her defining voyage to Cape Trafalgar. This finishes with the aftermath of the ferocious Battle of Trafalgar, where Nelson breathed his last breath. 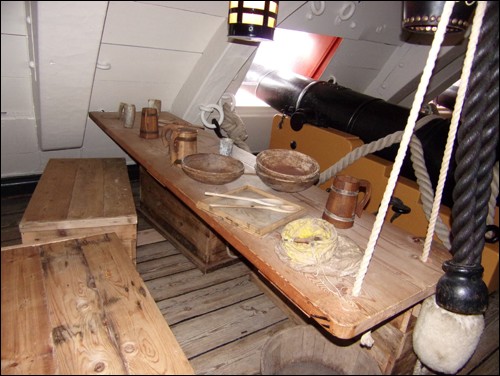 The Victory has had a new paint job, inside and out, gloriously returning her to her Georgian heyday and looks brand new. The interactive devices that you get when you start the visit allow you to listen to explanations but also acted scenes in the key sections of the ship. It is really well planned. Visitors get to experience HMS Victory through Nelson’s eyes, as the drama of the battle unfolds, deck-by-deck, hour by hour, as the ship sets sail on 14 September  1805. It was fascinating to walk around Nelson’s Great Cabin, access the carpenter and bosun’s store and see Captain Hardy’s Cabin displayed for the very first time as the working accommodation of a Captain. 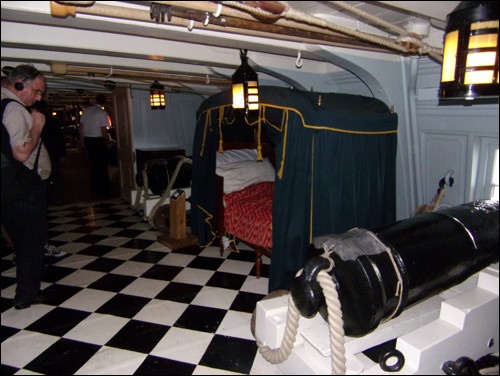 I found it particularly suggestive to walk the once crowded decks where over 800 men lived, worked and fought and to stand in the very spot where Nelson died. 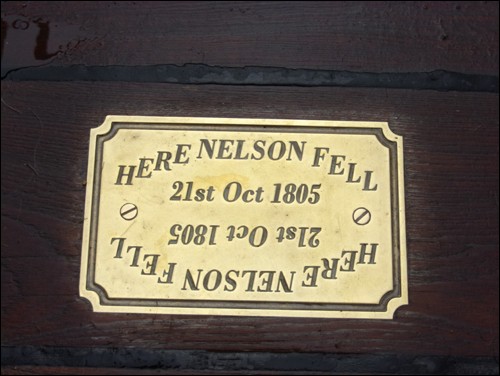 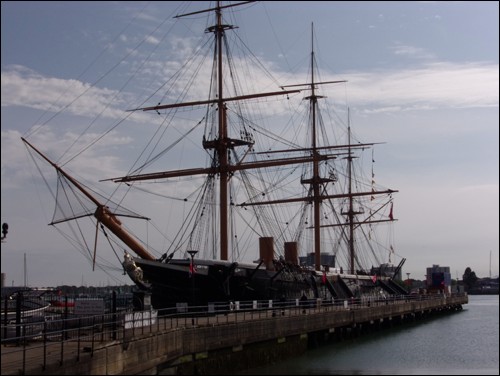 The last ship I visited is the HMS Warrior 1860, Britain’s first iron-hulled,  almighty Victorian armoured battleship, the most fearsome naval weapon of her day and sole survivor of the Black Battlefleet. 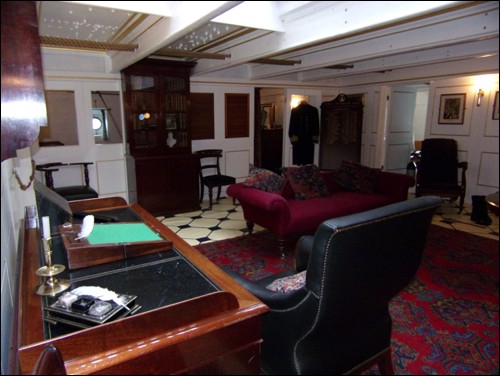 Launched in 1860, at a time of empire and Britain’s dominance in trade and industry, Warrior was the pride of Queen Victoria’s fleet. 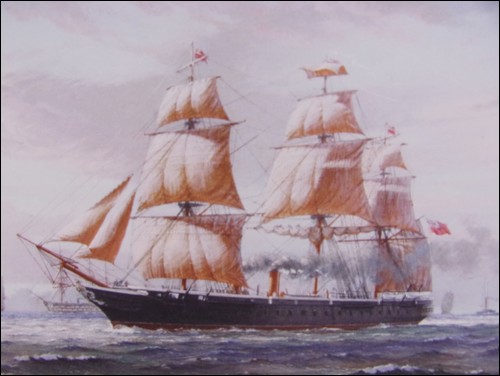 Powered by steam and sail, she was the largest, fastest and most powerful warship of her day and had a lasting influence on naval architecture and design. Work and life on board reflected both the changes the Royal Navy experienced as it evolved into a professional service and shifts in Victorian society. 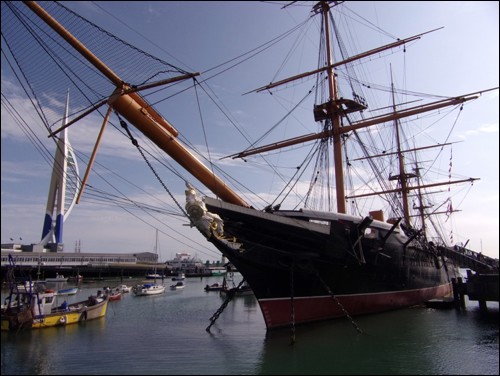 Built to counter the latest French battleship, Warrior was, in her time, the ultimate deterrent. Yet by igniting a new era in naval technology, she soon became outdated. After 22 years’ service, Warrior’s hull was to be used as a depot, floating school and an oil jetty. My visit felt endless as the HMS Warrior is really huge and almost scary considering it is so big I got lost at one point. But the volunteers and staff who were in service were really kind and helped me come out of the ‘maze’. 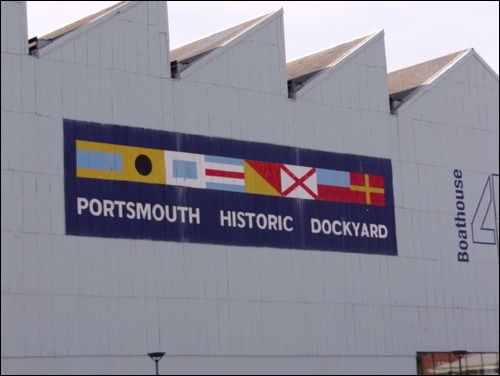 This is not all there is to see at the Portsmouth Historic Dockyard. In one day we could not see everything. To check what else you can visit go to www.historicdockyard.co.uk

All images shown in this page were taken by myself with my new Kodak Pixpro FZ201 Camera. 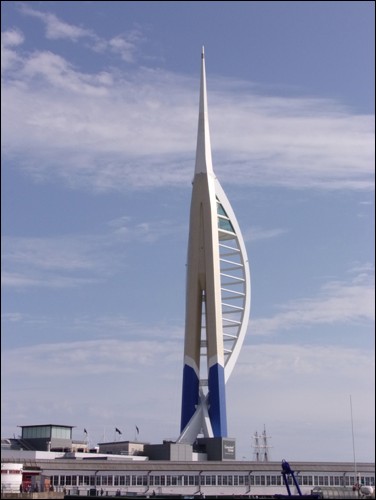 This entry was posted on Tuesday, July 4th, 2017 at 11:06 am and is filed under Attractions. You can follow any responses to this entry through the RSS 2.0 feed. Both comments and pings are currently closed.