This October the Royal Botanic Gardens at Kew invites visitors including families with young children to immerse themselves in the art, plants and culture of Japan with a brand-new autumn festival. The Japan festival runs from Saturday 2 October to Sunday 31 October 2021 in Kew’s majestic Temperate House. The world’s largest surviving Victorian glasshouse, the Temperate House is home to over 10,000 plants from across five continents, a beacon of the future for plant science and biodiversity. 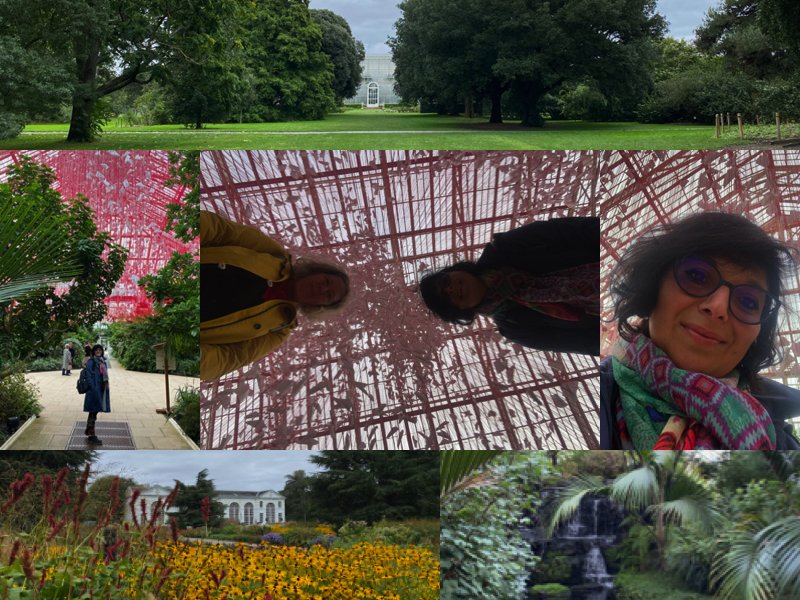 In a year when travel has been limited, Kew Gardens is celebrating the fascinating culture of Japan with this festival.  At its heart is a large-scale artistic installation by Japanese artist Chiharu Shiota, titled One Thousand Springs.

Renowned for her vast, room-spanning webs of thread installations, through which she explores human existence, Shiota’s One Thousand Springs will be suspended from the roof of the Temperate House. Constructed of 5,000 haikus, submitted by members of the public and suspended within a sea of red threads, this breathtaking installation will tell stories of our shared connections with nature and form a magnificent centrepiece to the festival.

Artist Chiharu Shiota said, “The Japanese language was formed by a culture that cherishes the natural world. Many cultural practices like ikebana, bonsai and hanami are based on the contemplation and enjoyment of nature. For One Thousand Springs I chose to focus on the haiku. The traditional haiku mentions one of the seasons and many haikus are based on observations in nature. The ones featured in this installation were submitted by members of the public from around the world.”

Stunning horticultural displays will take over in the Temperate House Octagons with a specially commissioned Chalk Garden, a striking contemporary response to a Japanese garden showcasing native plants including grasses, shrubs and trees. This collaboration between Otis Landscape Associates and kodai and associates presents contemporary Japanese garden design within a uniquely British landscape, inspired by Japan’s dramatic southern cliffs. Set against the classical architecture of the Temperate House, Chalk Garden promises to present a unique juxtaposition of Japanese and British cultures, cultivating a sense of calm and reflection.

As part of the festival, Kew’s own horticultural team have designed a spectacular display celebrating the magnificent Chrysanthemum, Japan’s national flower. Chrysanthemums are culturally significant in Japan, featuring on passports and banknotes and renowned as a symbol of longevity, rejuvenation and goodwill. Kiku Matsuri (Chrysanthemum Festivals) feature across Japan every autumn, where growers compete in classes for the coveted prize of first.

The display is Kew’s Horticulturist’s response to this tradition, featuring six varieties of chrysanthemums with yellow and orange blooms to evoke the setting sun in autumn and create a cheerful blaze of colour.

Visitors can also encounter an emotive, immersive soundscape by sound artist Yosi Horikawa within the Temperate House. Capturing the harmonious natural sounds of the rivers and waterfalls of Kagoshima, as well atmospheric soundscapes from the Cedar mountains of Gifu and bird calls set across the waves of the Philippine Sea, this sensory installation will capture the unique ambience of Japan’s beautiful and diverse natural landscapes.

Paul Denton, Head of Visitor Programmes and Exhibitions at RBG Kew said, “Kew has a strong connection to Japan through both our architectural features and our plants in the Gardens. The beauty and harmony of Japan is rich and fascinating, and the natural world as a whole is woven through Japanese culture in a unique and tangible way. We are honoured to celebrate the country’s rich connection to nature through contemporary art, iconic plant displays, food and crafts in a brand-new festival this autumn.”

Weekends and After Hours

The Temperate House will be illuminated for Japan: After hours, with a varied programme from dance, theatre, and live music performances to traditional flower arranging and sake sipping. Visitors can enjoy performances from dance company Butoh UK and electronic musician and DJ Anchorsong, whilst learning about the intricacies of sake with experts from Japan House London. Demonstrations of the ritual art of ikebana – Japanese flower arranging – will be given by artist Hanako Matoya, and our Kew Experts will be on hand to share their knowledge of the remarkable horticulture of Japan with guests.

On weekend mornings, Japanese busker ICHI will be taking the notion of a one-man band to new limits, combining his quirky handmade instrument inventions with steel-drum, ping-pong balls, typewriter, toys and other everyday objects. In the afternoons Japanese shod master KASHU will present giant calligraphy performances, demonstrating this age-old Japanese tradition – a discipline of beauty and a search towards pure form and cultivating peace from within.

Outside the Temperate House, visitors can enjoy the tradition of Momijigari, the Japanese custom of autumn leaf hunting, visiting areas where leaves have changed into spectacular yellows, reds and burnt oranges. A 1.5-mile Momijigari trail across the Gardens will encompass the areas of stunning autumn foliage across Kew’s 14,000 strong tree collection, as well as taking in Japanese landmarks such as Chokushi-Mon and the Japanese Garden, and the Minka House.

This entry was posted on Thursday, September 30th, 2021 at 1:27 pm and is filed under Attractions. You can follow any responses to this entry through the RSS 2.0 feed. You can skip to the end and leave a response. Pinging is currently not allowed.