This week, Tate Britain opens the UK’s largest and most comprehensive retrospective of the work of Portuguese artist Paula Rego  (b.1935). Rego is uncompromising in her extraordinary imaginative power and redefined figurative art as well as revolutionised the way in which women are represented. The exhibition tells the story of Paula’s remarkable life, highlighting the personal nature of much of her work and the socio-political context in which it is rooted. It reveals her broad range of references, from comic strips to history paintings. Featuring over 100 works including collage, paintings, large-scale pastels, drawings and etchings, the show spans Paula Rego’s early work from the 1950s to her richly layered, staged scenes from the 2000s. I loved this exhibition which deepens my knowledge of this artist and her talented family including Rego’s husband and painter Victor Willing and their son and filmmaker Nick Willing. I had the pleasure to meet them a few years ago at a retrospective about Victor Willing in Hastings. 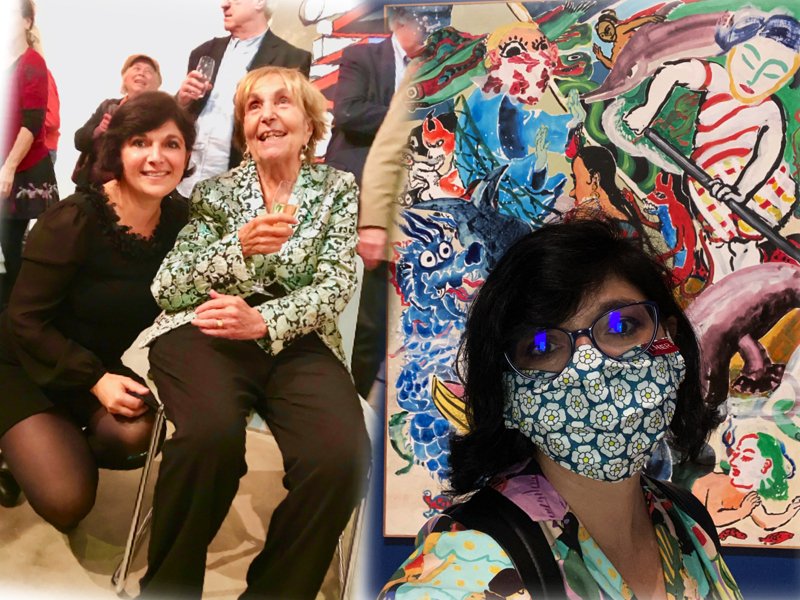 If you are thinking of taking young children to this exhibition, I’d say that all artwork is fascinating although the themes behind them might require complex explanations. Children will still enjoy the colourful images and the collages. Art is always educational and inspirational no matter what. 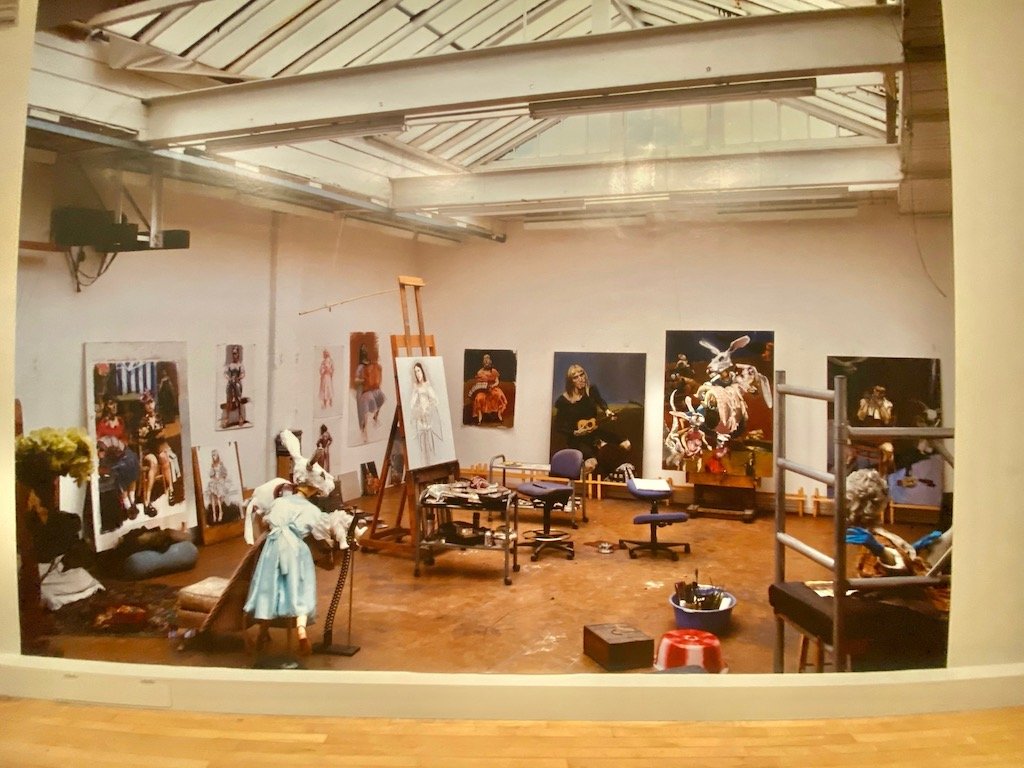 The Tate exhibition begins with a selection of  Rego’s rarely seen early works in which the artist first explored personal as well as social struggle. In Interrogation 1950, painted at fifteen years of age, Rego asserted her commitment to denouncing injustices and standing up for victims. In her paintings, collages and drawings from the 1960s to 70s, Rego passionately and fiercely opposed the Portuguese dictatorship, using a range of sources for inspiration including advertisements, caricatures and news stories. She also explored folk tales as representations of human psyche and behaviour, as with Brancaflor – The Devil and the Devil’s Wife in Bed 1975.

Rego abandoned collage in 1980 and returned to painting, combining childhood memories with her experiences as a woman, wife and lover. The exhibition includes major paintings from this period such as examples from ‘The Vivian Girls’ series (1984), in which girls rebel against a coercive society, and the seminal works that established Rego’s reputation when first exhibited at the Serpentine Gallery in 1988 including The Policeman’s Daughter 1987. Many of these pictures relate to Rego’s intense relationship with her husband Victor Willing, who for many years suffered from multiple sclerosis and died in 1988. 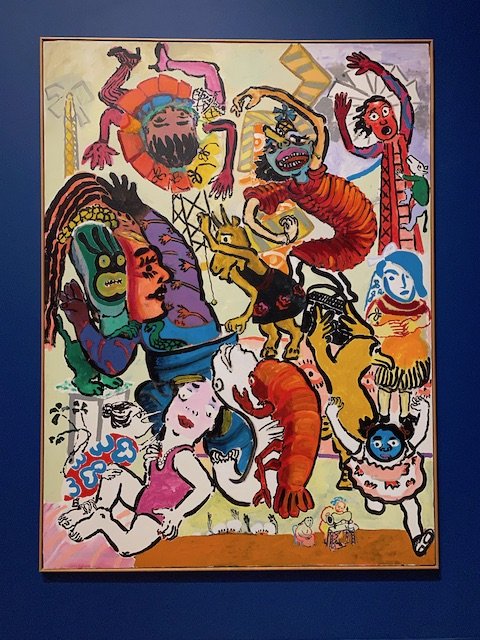 Throughout her career, Rego has been fascinated with storytelling and this imbues much of her work. The exhibition includes prints from her series Nursery Rhymes 1989 in which Rego explores the strangeness and cruelty of traditional British children’s songs. As the first artist-in-residence at the National Gallery, Rego also took inspiration from art history, weaving references to old masters such as Hogarth and Velázquez into paintings in which the protagonists are women, exploring their struggle and their journey towards emancipation, as in The Artist in Her Studio 1993. 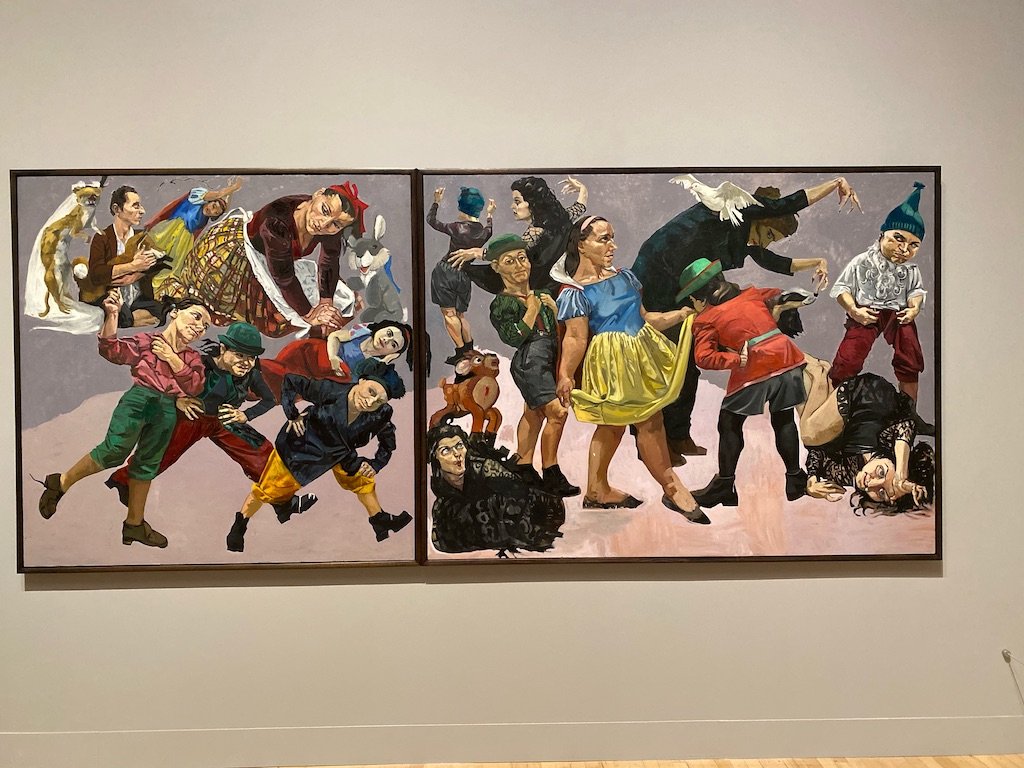 The exhibition features Rego’s large pastels of single, female figures from the 1990s to 2000s, including the ‘Dog Woman’ and ‘Abortion’ series, some of the artist’s most celebrated and arresting pictures. Works from the ‘Abortion’ series, which the artist was proud to see used to campaign for the legalisation of abortion in Portugal, depict women in the aftermath of illegal abortions. 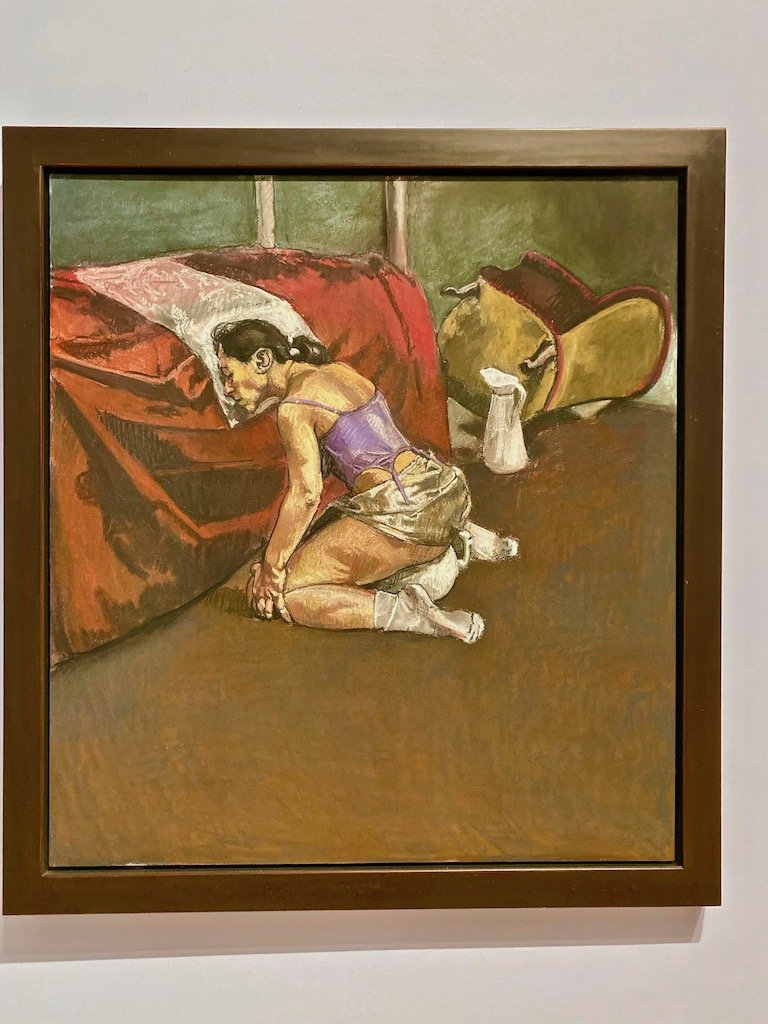 One of the painting in the Abortion series

At the press viewing, Nick Willing gave interview to Portuguese TV networks and mentioned that Portugal reveres Paula Rego who is one of just a handful of internationally acclaimed artists. Rego was essential to push the campaign to get the abortion law. 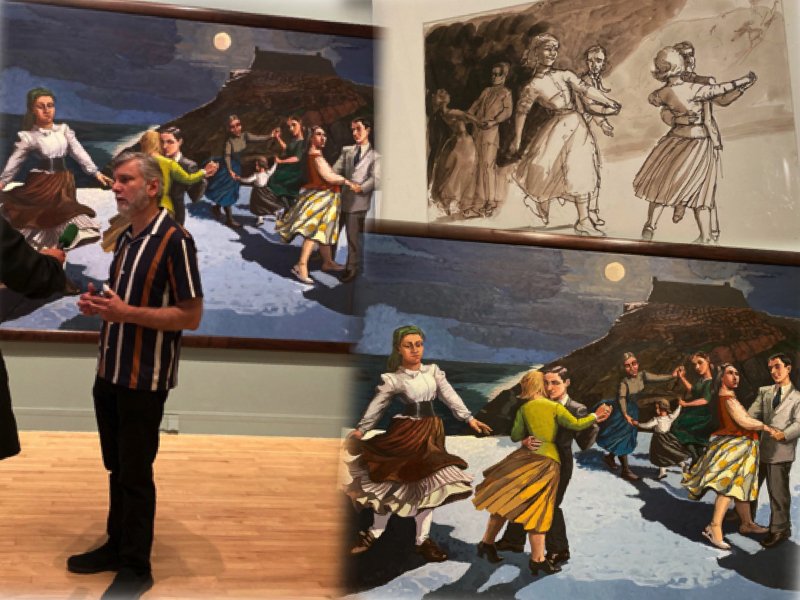 Nick Willing in front of his mum’s painting The Dance. This is possibly my favourite Paula Rego’s painting

Personally, I found the Abortion paintings a bit shocking yet really touching.

Possession 2004, another major series of pastels rarely exhibited, combines Rego’s personal experience of depression and therapy with inspiration from 19th century staged photographs of women diagnosed as suffering from ‘hysteria’.

The exhibition invites visitors into Rego’s creative world and explores the mise-en-scènes that the artist has been setting up, drawing and painting in her studio throughout the 2000s. Seminal paintings from this period include War 2003 and The Pillowman 2004. The exhibition also brings together striking works addressing the issues of women’s trafficking and female genital mutilation. These powerful images confront difficult stories of pain and abuse that Rego feels need to be told. 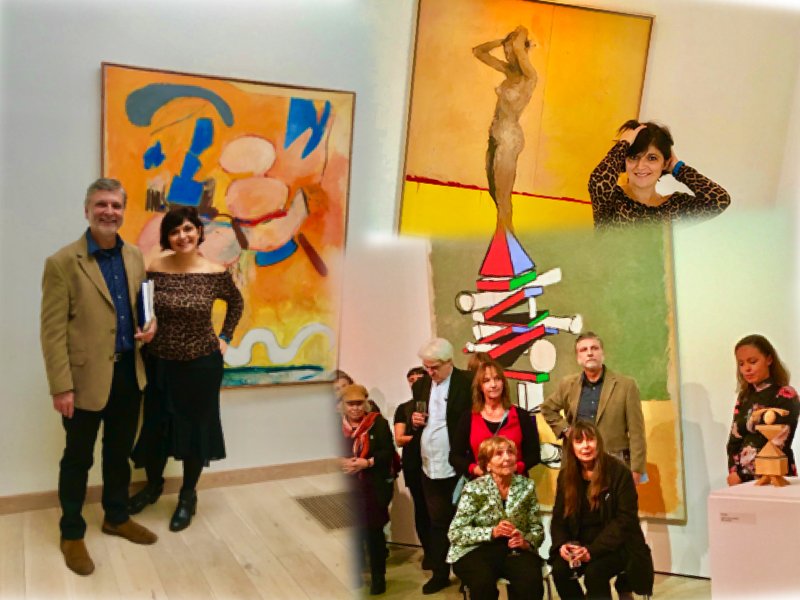 Paula Rego has had an eventful life so far. So typical of artists who have lots to say and great positive energy. Here’s a bit of background about her life. She was born in Lisbon, Portugal in 1935, during the authoritarian dictatorship of António de Oliveira Salazar. Her parents were anti-fascists and Anglophile, and wanted their daughter to live in a liberal country. At the age of sixteen, she was enrolled in a finishing school in Kent, England. She went on to study painting at the Slade School of Fine Art, London (1952–56), where she met fellow painting student Victor Willing, whom she married in 1959. After graduating, Rego and her family lived between Britain and Portugal and settled in London in 1972. She represented both nations at the São Paulo Biennial: Portugal in 1969, and Great Britain in 1985. In 1988, Willing died following a long-term illness. The same year, Rego’s solo exhibitions at the Calouste Gulbenkian Foundation, Lisbon, Serralves Museum, Porto, and Serpentine Gallery, London, cemented her reputation as a major contemporary artist. In 1990, she became the first Associate Artist of the National Gallery, London. She had numerous retrospective exhibitions including at Tate Liverpool, 1997, Museo Nacional Centro de Arte Reina Sofia, Madrid, 2007, Museo de Arte Contemporáneo de Monterrey and Pinacoteca do Estado de São Paulo, 2010–11, and Musée de l’Orangerie, Paris, 2018. In 2009, a museum dedicated to her work, Casa das Histórias Paula Rego, opened in Cascais, Portugal. The documentary Paula Rego, Secrets and Stories, directed by her son Nick Willing, was released in 2017. Rego lives and works in London. 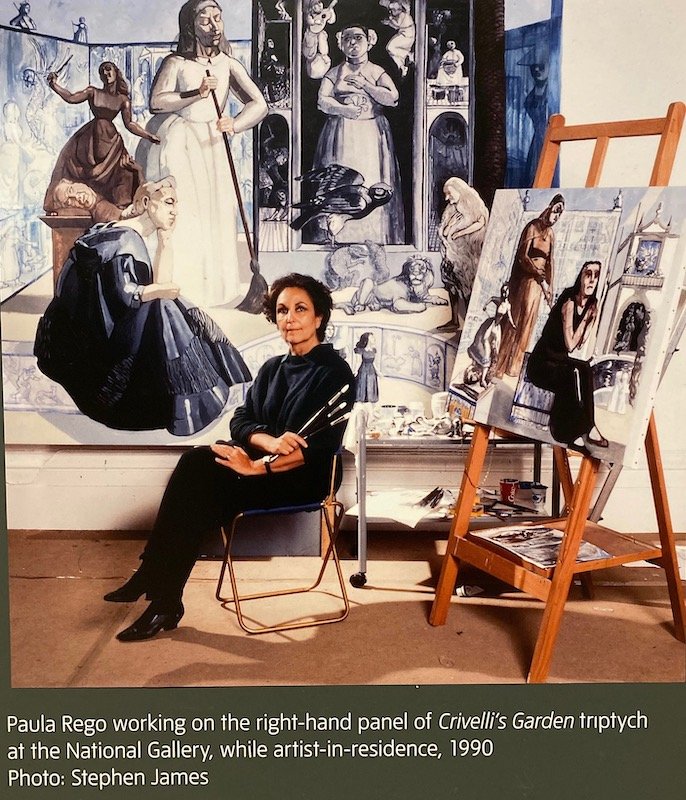 This entry was posted on Tuesday, July 6th, 2021 at 2:43 pm and is filed under Attractions. You can follow any responses to this entry through the RSS 2.0 feed. You can skip to the end and leave a response. Pinging is currently not allowed.