Exposing children to art early on in life is crucial to develop a sensibility to beauty and the latest Tate Britain exhibition Impressionists in London, French Artists in Exile (1870-1904) opening on 2nd November 2017 is the perfect introduction. Tate Britain brings together over 100 beautiful works by Monet, Tissot, Pissarro and others in the first large-scale exhibition to chart the stories of French artists who sought refuge in Britain during the Franco-Prussian War. This exhibition maps the artistic networks they built in Britain, considers the aesthetic impact London had on the artists’ work, and presents instantly recognisable views of the city as seen through French eyes. 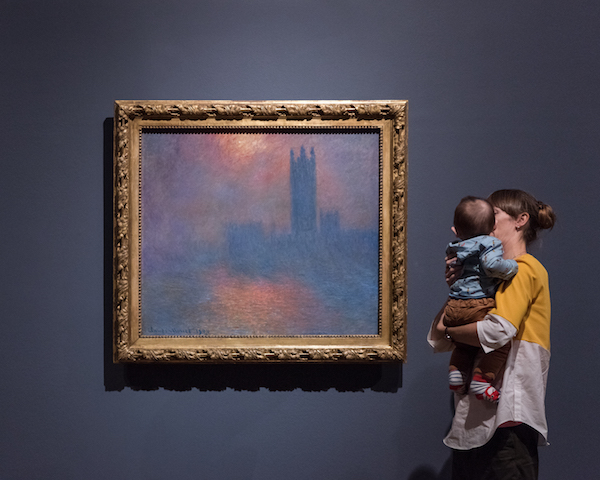 There’s no photo that can capture the beauty of a painting in front of you and Impressionists in London masterpieces have to be seen in person, not on a computer nor book nor screen. 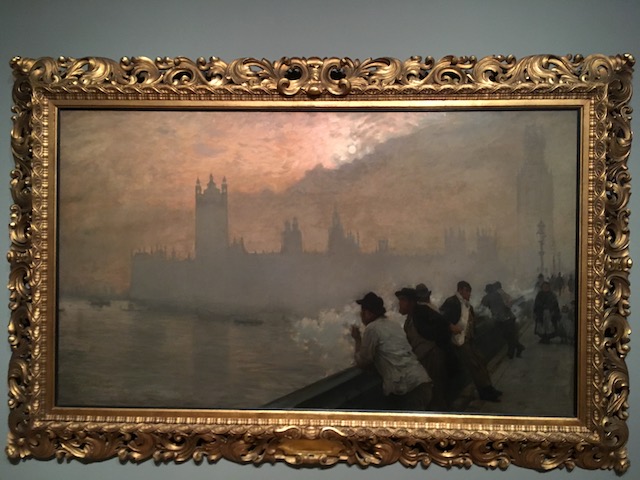 The EY Exhibition: Impressionists in London looks at French painters’ keen observations of British culture and social life, which were notably different to the café culture found in Paris. Evocative depictions of figures enjoying London parks such as Pissarro’s Kew Green 1892 are shown, that were in stark contrast to formal French gardens where walking on the grass was prohibited. 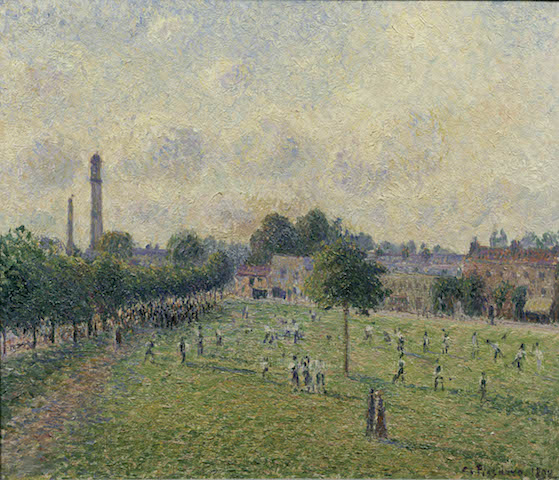 Scenes of regattas fringed with bunting as painted by Alfred Sisley and James Tissot in The Ball on Shipboard c.1874 are also displayed, demonstrating how British social codes and traditions captured the imagination of the Impressionists at the time. 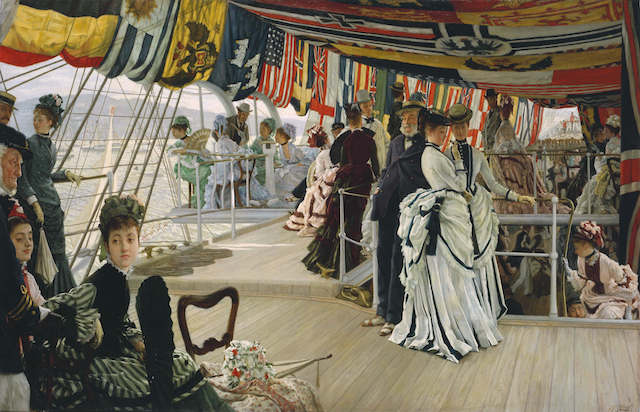 At that time London was the largest city in the world and London became a very attractive place for French refugee artists who fled from France to Britain in the 1870s to escape the trauma of the Franco-Prussian war and left Paris under war, in rubbles. The first part of the exhibition shows images of the atrocities of this conflict. Watercolours show dead people, public executions as well as a stunning wounded soldier. Artists wanted people to remember the tragedy by  telling human stories in the 1870s. 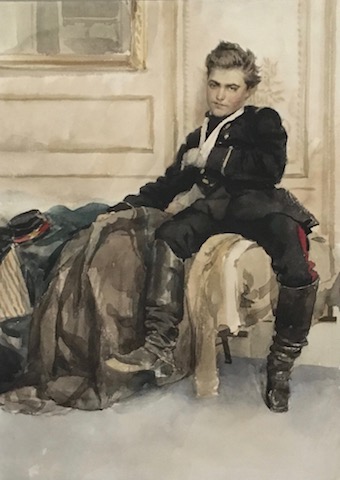 They managed to capture its buzz and beauty in recognisable views of London landmarks. They also changed the perception of London. French artists were fascinated with English parks as in Paris it was forbidden to walk on grass. 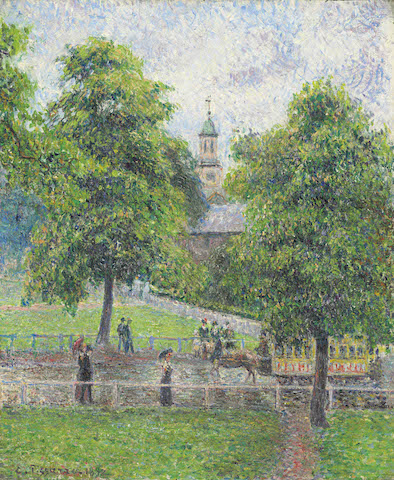 They were also fascinated by English sports such as cricket and captured cricket players in their paintings.
One of my favourite artists among the Impressionists in London was Tissot, a friend and collaborator of Vanity Fair’s founders who had access to the high society in the British Capital as well as Royals. 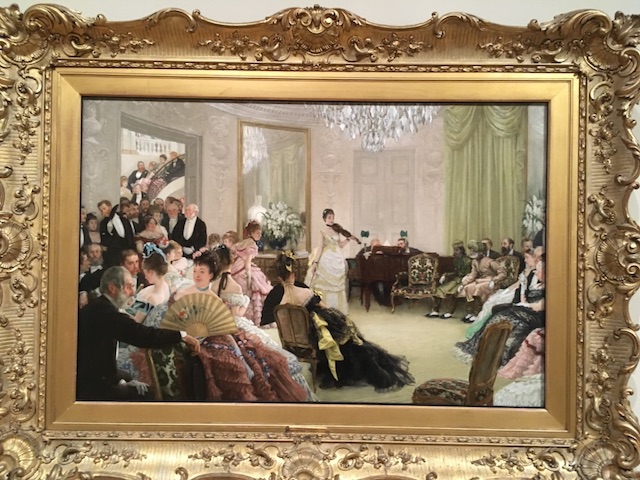 Tissot was more interested in costumes and fashion as he was the son of a textile man. I love the way in which he captures the flirtatious conversations between young lovers. 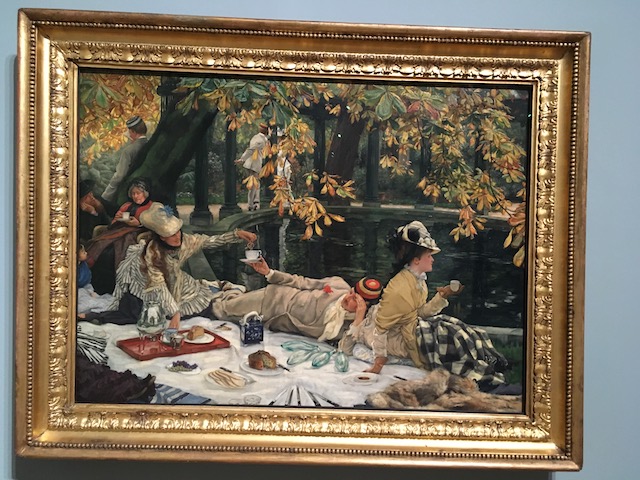 I love Tissot’s portrayal of flirtatious couples in their fabulous outfits. This oil paint on canvas is called Holyday by James Tissot (c.1876) set in his own garden in St John’s Wood. 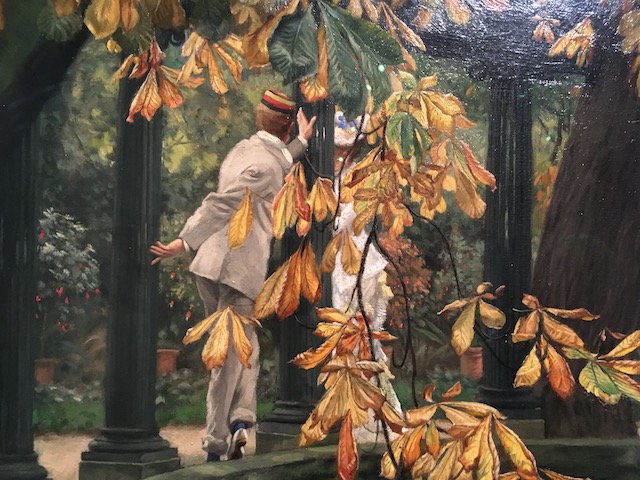 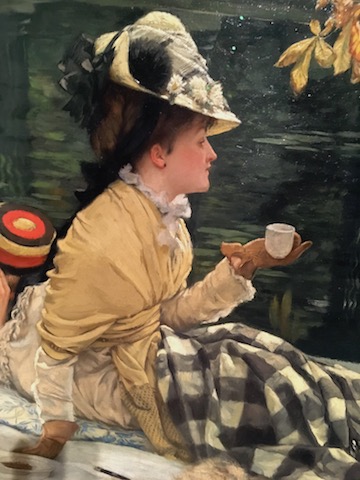 While in London, French artists gravitated towards notable figures who would help them develop their careers and provide them with financial support. The exhibition looks at the mentorship Monet received from Charles-François Daubigny and considers the significant role of opera singer and art patron Jean-Baptiste Faure – works that he owned including Sisley’s Molesey Weir, Hampton Court, Morning 1874 are displayed. One of the most influential figures to be celebrated is art dealer Paul Durand-Ruel, who first met Monet and Pissarro in London during their exile in 1870-71. Durand-Ruel purchased over 5,000 Impressionist works over his lifetime which, in Monet’s own words, saved them from starving.

Monet did not have  any money when he came to London and only made six paintings as he did not have enough to pay for material. The portrait of Madame Monet shows how frugal his house was.
In 1870 the Houses of Parliament, Westminster Bridge and Victoria Embankment were just being completed and became the subjects of many paintings by the Impressionists in London. Many are included in the final and largest section of the exhibition dedicated to representations of the Thames. Featuring a group of Monet’s Houses of Parliament series, this room looks at how depictions of the Thames and London developed into a key theme in French art. 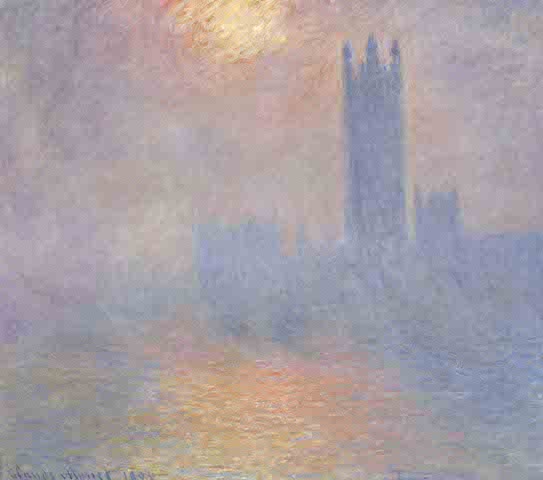 Fog was central in the paintings of many exiled French artists interested in the newly built monuments. The association between the fog and the Houses of Parliament / Westminster is the main theme of Monet’s study showing the Houses of Parliament under different lighting.
Monet returned to finish this study  between 1900 and 1904. He started this project with the Charing Cross bridge series from his room at the Savoy, then with the Houses of Parliament series. The canvases were the same. He painted so frantically because he wanted to capture the constantly changing colours of fog. He wanted to capture the right moments. Eventually he took all these paintings back to Giverny to finish the series.
In 1905 he came back to London to show the complete series but he couldn’t find a British buyer. This is why none of these masterpieces are in British museums. 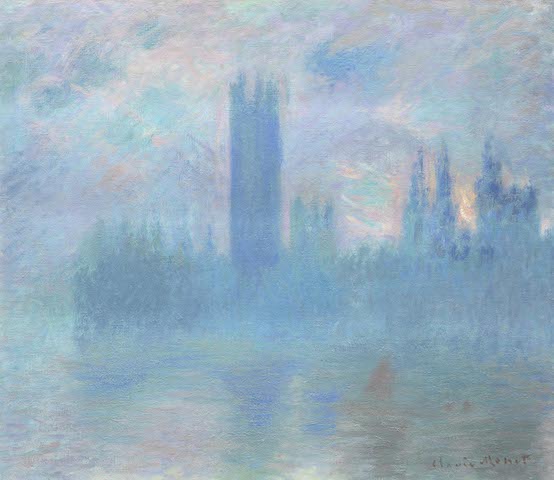 Monet made three pictures of Leicester Square – one of which is exhibited here – in a very contemporary and almost surrealistic style trying to capture the noise of the crowded streets of  London by night. 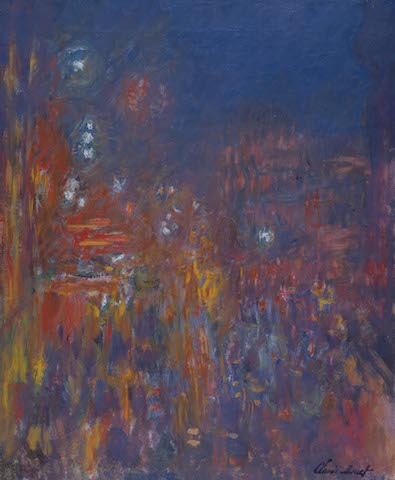 Monet spent a lot of time at the Cafe Royal in Regent’s Street.

At the end of the exhibition, a selection of André Derain’s paintings of London landmarks, which answer directly to Monet’s, demonstrate the continuity of the London landmarks’ motif in art history.

Derain challenged Monet on his own ground using the same themes i.e the Thames and Houses of Parliament but in a different style from the other Impressionists.
Part of the exhibition examines the central role of Alphonse Legros in French émigré networks. As Professor of Fine Art at the Slade School in London from 1876 to 1893, he made a dynamic impact on British art education both as a painter and etcher, and exerted a decisive influence on the representation of peasant life as can be seen in The Tinker 1874. He introduced his patrons Constantine Alexander Ionides and George Howard, 9th Earl of Carlisle, to sculptor Aimé-Jules Dalou who then, together with fellow sculptor and émigré Edouard Lantéri, shaped British institutions by changing the way modelling was taught. Jean-Baptiste Carpeaux’s sojourns in London, which he initially planned in order to stay close to his great patron, the exiled Emperor Napoleon III, are also examined.

The show concludes with the Entente Cordiale – a formal pact of peace and unity between Britain and France – which, in the case of Monet in particular, coincided with the culmination of an artistic project which started in 1870.

The EY Exhibition: Impressionists in London, French Artists in Exile (1870-1904) is curated by Dr Caroline Corbeau-Parsons in collaboration with the Petit Palais and Paris Musées. The exhibition is accompanied by a fully illustrated catalogue and a programme of talks and events in the gallery.

This entry was posted on Wednesday, November 1st, 2017 at 3:07 pm and is filed under Attractions. You can follow any responses to this entry through the RSS 2.0 feed. Both comments and pings are currently closed.