A tour of London on the magical Efteling bus

One of our London Mums recently went on a tour of London with her son on board of the Efteling bus and sent us her review. Here’s what Bibi and Leo told us.
‘We met up at the Admiralty Pub in Trafalgar Square. The weather was brilliant, showers of sunshine.  Trafalgar Square was buzzing with excitement, there were live music stages and people everywhere. Little Red Riding Hood boarded the bus with us together with Thomas the Dragon Slayer. 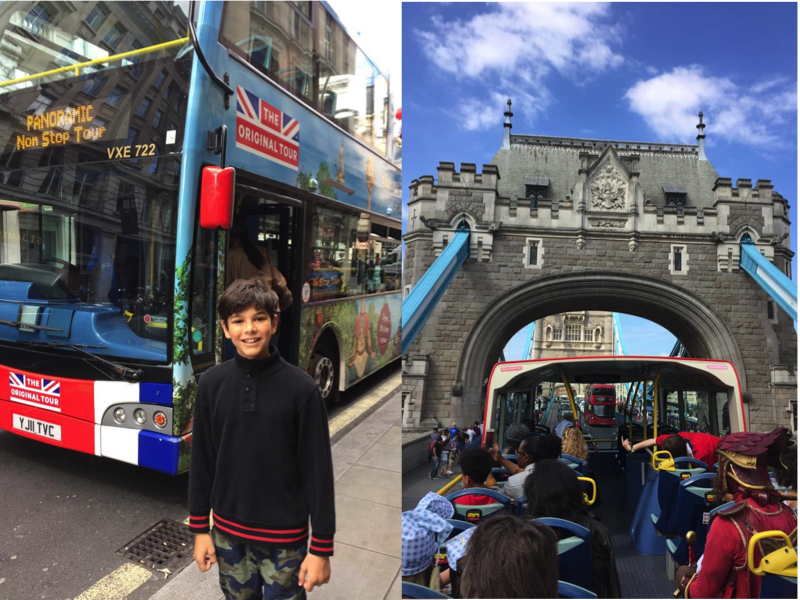 Once on the bus the entertainment and fun began.  We had live, educational and interactive commentary for the entire journey.  We sang some famous nursery rhymes including ‘London Bridge is falling down’. 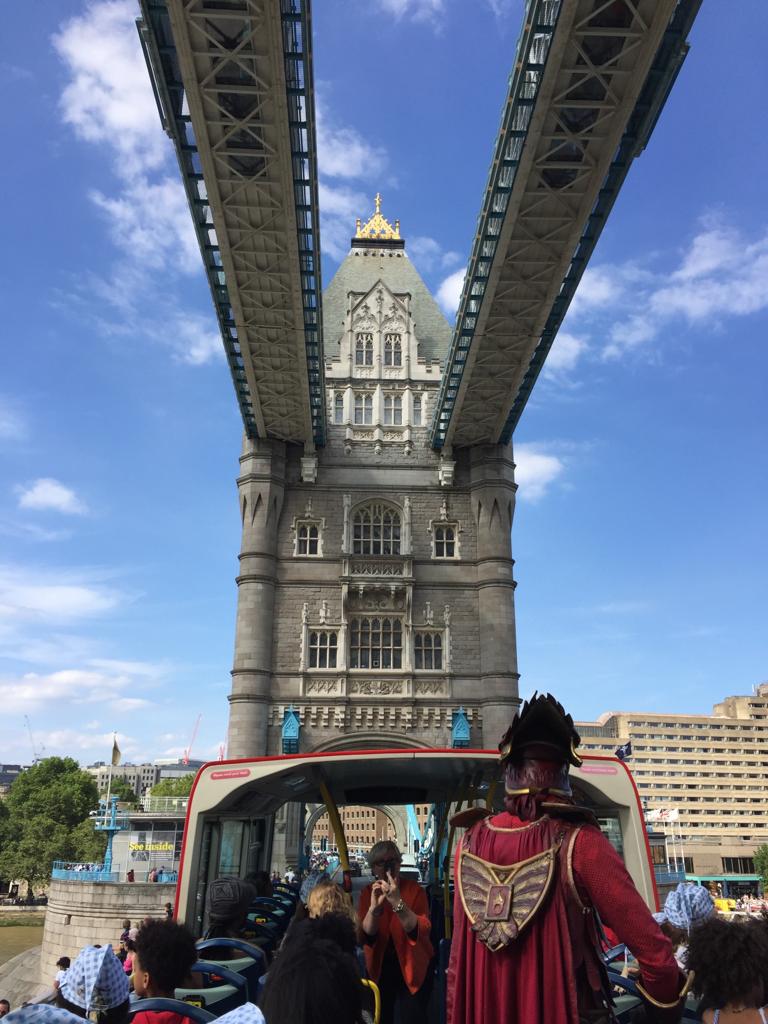 We learnt some interesting facts. Here are some.
The huge screen at Piccadilly Circus is the largest screen in Europe.  Piccadilly comes from the word ‘piccadills’ or ‘piccadillies’.  A famous tailor who lived in the area used to sell piccadills which is the white collar used in clothing during Shakespeare’s era.  Circus is a road junction. Hence, Piccadilly Circus. 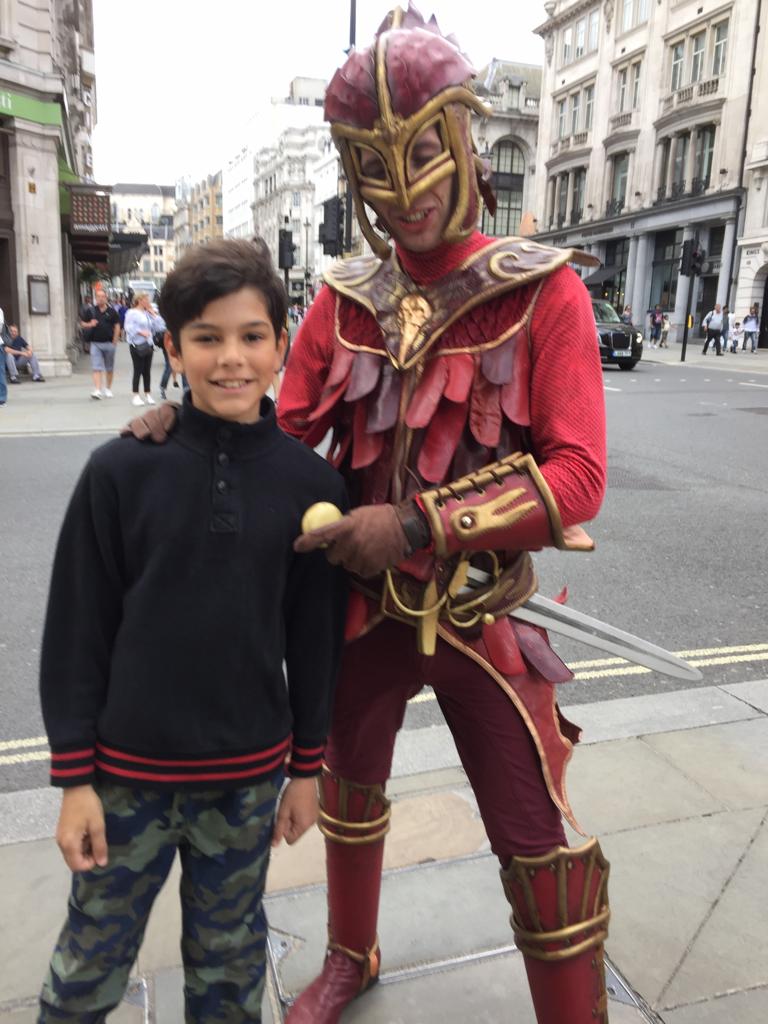 Fortnum and Mason is where Queen Elizabeth shops.  Her orders are delivered by horse-drawn cart directly to Buckingham Palace.
The Ritz Hotel is the poshest hotel in the world.
Green park is named so because it’s entirely green and a park.
Wellington Arch is named after the Duke of Wellington.  It is said the the artist had a tea party in the belly of the horses. 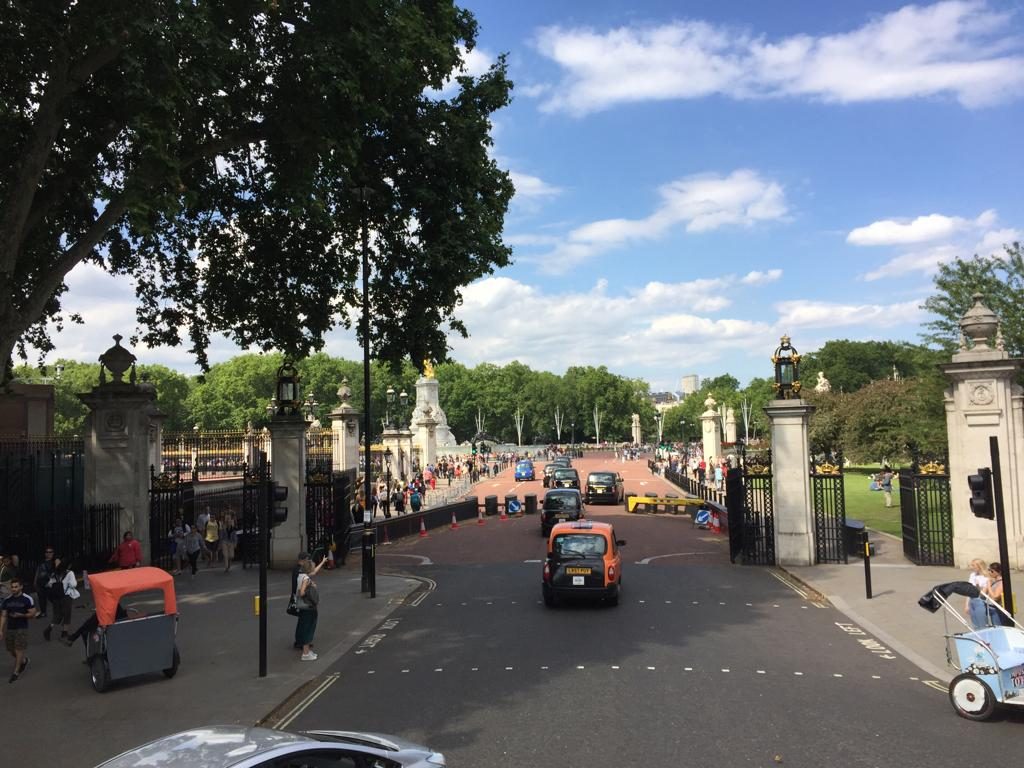 There are 775 rooms in Buckingham palace but the Queen only uses 12.
The Queen is a fully trained mechanic.
We drove on the Horseferry road, named after the ferries that took horses across the river, now Lambeth Bridge.
The London School of Economics had two famous students, Mick Jagger and David Attenborough.
Fleet Street is famous as the HQ of national newspapers, journalism and printing from the 18th century to the mid ’80s UK.  Beano was the last comic to publish in Fleet Street.
The dragon is the official symbol of the city of London.
Tower Bridge is often mistaken by tourists for London Bridge. 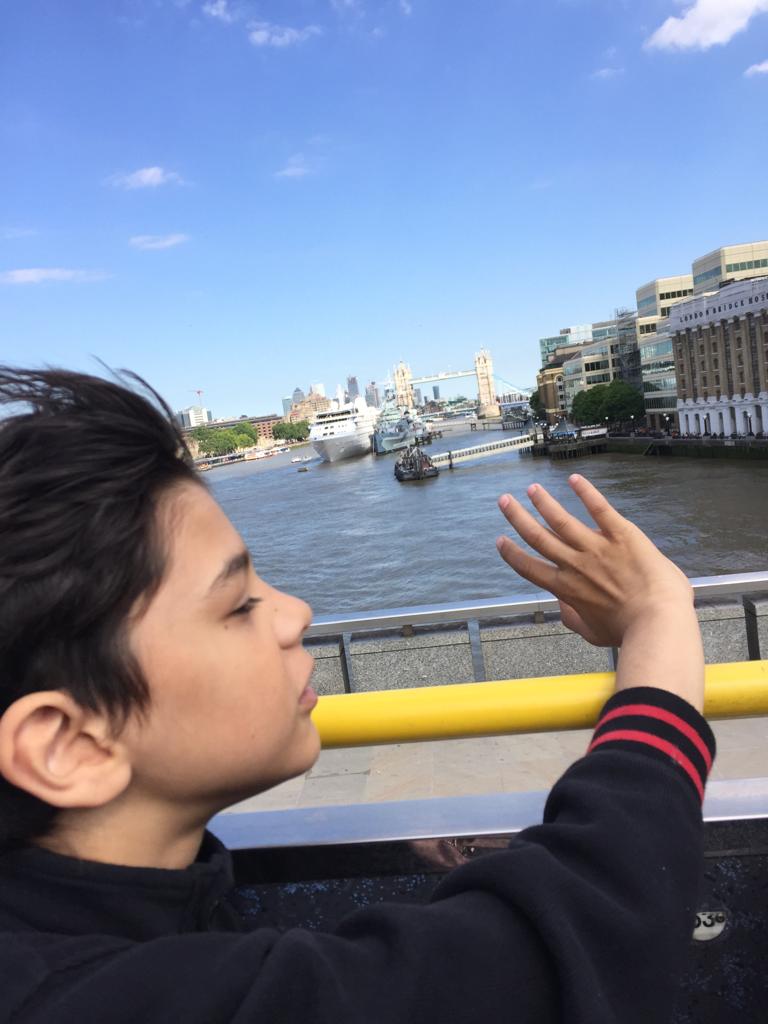 A considerable amount of workers who built Waterloo Bridge were women.
Leo had a fantastic time too and said he listened to all the interesting commentary and wants to go back again.  We were given a goody bag and Leo got a build-a-bear teddy which he fell in love with.  He waved to all the other tour buses passing by and it was truly a lively experience for him.  He wasn’t bored one bit and was a bit disappointed when the tour ended.’ 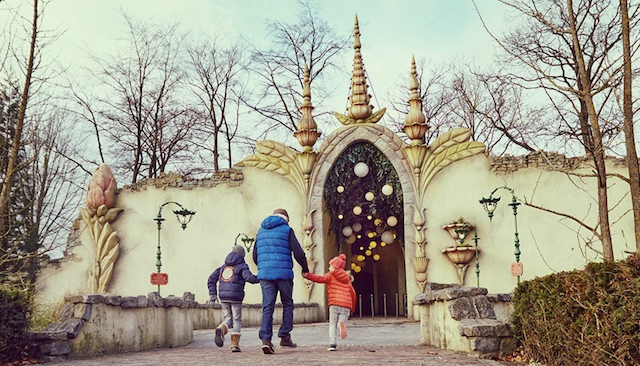 Efteling is the fairytale theme park located in the south of Holland, which can be an idea for a short family break from the UK with its storybook atmosphere, natural surroundings and enchanting attractions, thrilling rides and shows. Fort the little ones there’s the Fairytale Forest with all the traditional family-favourite stories. They can watch unicorns and forest animals come to life on Droomvlucht. There are daily shows including water show Aquanura for parents and children alike. For older kids looking for a half-term with a thrill Efteling is the place to visit. From imaginative dark rides such as the award-winning Symbolica, Palace of Fantasy and the adrenaline fuelled Baron 1898, which plunges riders in a 37.5 metre free-fall, there is no shortage of thrills for tweens and teens! Park’s accommodation include Loonsche Land – featuring a village with a hotel, holiday houses and themed rooms, including tree houses built on stilts, cabins overlooking a lake, and lodges hidden within sand dunes. Designed with families in mind, the village has a ‘back to nature’ theme surrounded by forests and heather fields, with an on-site farm where children can care for animals and play in the barn. In autumn 2019, Efteling will expand to welcome a new fairytale based on the Brothers Grimm fairytale called ‘The Six Swans’. The attraction will be the 30th fairytale to join the forest and will be the first ever to include a ‘mini’ ride. The scene will feature six boat-shaped swans suitable for the younger visitors to ride. 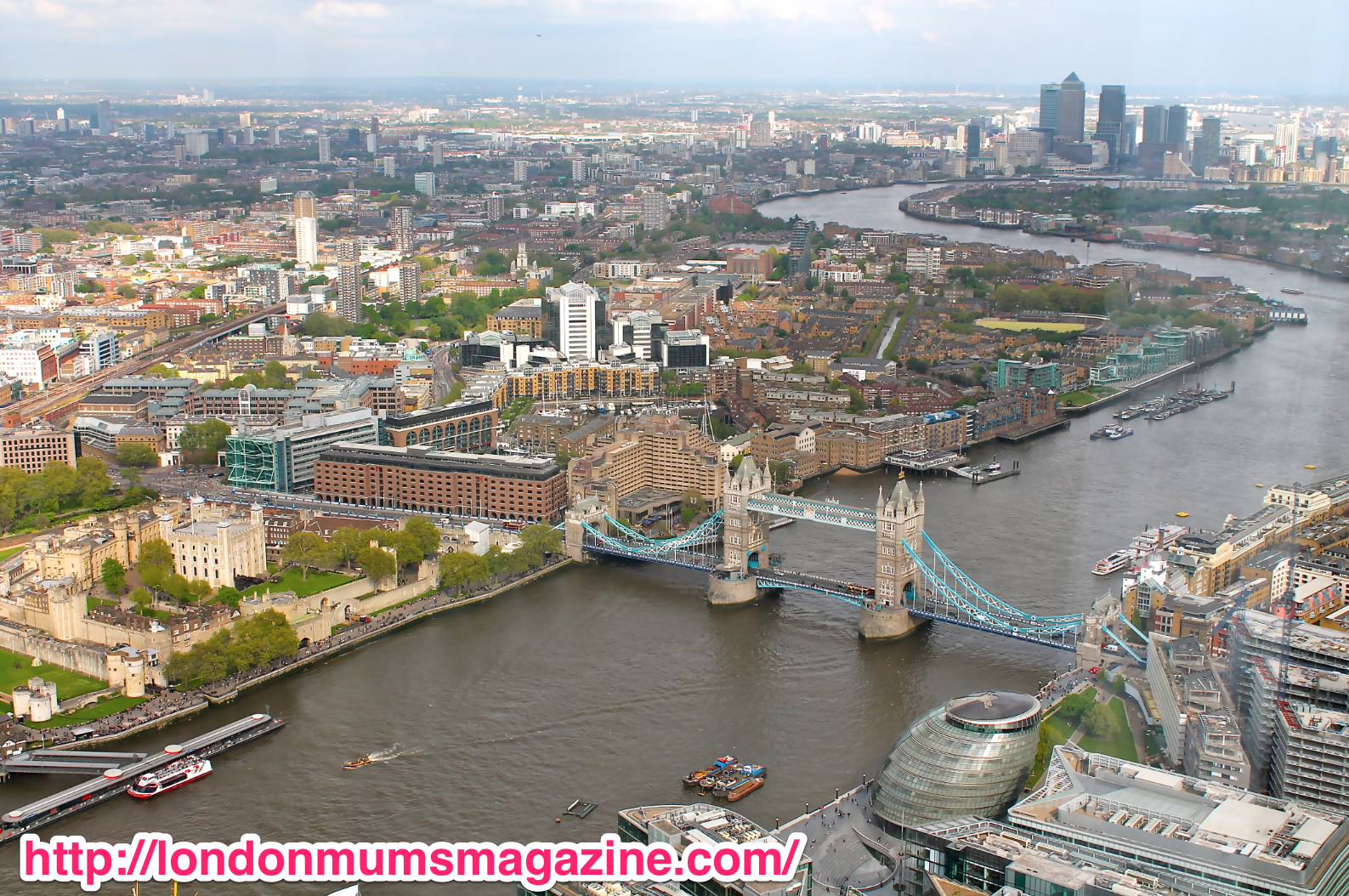 27 Fab Things to do with (and without) kids in London

Things to do in London with kids on the River Thames

Fun Things to Do in London with the Kids This Summer

Bear Grylls Top Ten Things To Do Before You’re Ten

This entry was posted on Thursday, June 27th, 2019 at 11:16 am and is filed under Attractions. You can follow any responses to this entry through the RSS 2.0 feed. Both comments and pings are currently closed.